Bloom where you are planted 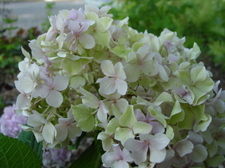 That's a favorite saying of one of my favorite aunts and it has a funny significance involving semantics and spelling for our family.  Late bloomer, early bloomer, fading blooms... bloomin' all over, bloomin' all the same.

I just have to say, YOU GUYS ROCK!  If I ever need an after-school pick-me-up, a virtual pat on the back, a little encouragement to keep on going, I certainly know where to find it.  Thank you for all the encouragement!

Not only is there a treasure trove of encouragement and support, the comments to that last post are also packed with inspiration.  Did I mention?  YOU GUYS ROCK!  I also found some on Yahoo yesterday -- it popped up, kind of like "a sign" -- this story about Phyllis Turner earning her Master's at 94.  NINETY-frickin'-FOUR!  I need only think of my own mother, too.  She ended up in school following a divorce in her mid-30s with the eldest of five kids (that would be me) poised on the cusp of adolesence -- somehow we all got through it with minimal damage.  Mom earned her nursing degree ad was "capped" a year before I graduated high school.

I was sitting on the front porch the other day and was reminded of a(nother) cute meme -- the Front-and-Back Meme -- I was actually quite taken with the view, here's another, particularly out the back, and so have had this bookmarked in the Bloglines list. 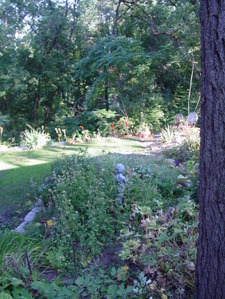 Ali's car was parked out front while she was gone on a long-weekend road trip with friends to Shepherdstown, WV.  They've a friend working on a summer theater crew there, so took in some shows, went tubing on the Potomac, drove up to D.C. for a whirlwind day on the way home.  She left her car for Maddy to use and, for the privilege, also a list of requirements to be satisfied, including an oil change.  Maddy also washed it and organized its contents, noting in her note to Ali, "Don't worry, I didn't pry."  Makes me wonder what was pry-worthy and how juicy.  If you have to say you didn't do it, it must mean that you were tempted to do it.  Anyway, Maddy was cute as a bug in that Beetle.  ; )

I will finally finish Saartje's Bootees tonight and they'll be in tomorrow's mail.  I'm so excited.  All four buttons are sewn on and two of the four loops made -- don't ask.  I managed to work my way through the decreases on the new Baby Surprise and am poised to begin increases.  I predict a weekend finish.

I love your view. My back door looks at another persons garage and the front looks at a big pine tree...ho hum.
The hydrangea is really so delicate and beautiful. Wouldn't it make a great yarn colorway. Hurray for finishing!

What a great view coming and going! I love the flower garden in the back! :)

Lovely front and back views. Just lovely. I too think the sisters note was very cute.

Your views are really nice! I may do that, but mine are hardly something to beam about. The girls sound really cute :) I'm sure given the same circumstances, my youngest would have left a mess for sis to clean up!

I love that you planted that bit of ground between the sidewalk and the street. If we had sidewalks, I would want to plant there too. A house a few blocks away just planted theirs this year ---- with vegetables!

FAbulous view! Great gardens!! What type of program are you pursuing? I just graduated in May at age 58 with my MLS. But, it took me four years, instead of the normal two. You go girl!!