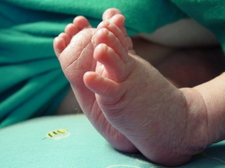 On Monday, Maddy drove the van down to help Ali pack up and bring most of her stuff home.  Ali will be taking over the room that Katie is vacating -- which I secretly preferred for "Vicki's Room," but this will work/it's not forever.  Ali's work transfer up here is effective on Monday, and I think that will also be the date of official relocation... back to her original location at home (for a while).

Katie opened the door to the van to help with unloading and exclaimed that it looked like a country cottage had exploded inside!  Heh, yeah, Ali's a little bit Shabby Chic and Katie's a little bit Retro Ranch (the Donny & Marie of interior decorating, if you will).

As they unloaded all of Ali's stuff, they decided that there was no sense just moving it part-way (like into the living room where some of Ali's early arrivals have been hangin'), they may as well move it all the way, which meant moving Katie's stuff out.  And as long as they were moving Katie's stuff out, they may as well load it right into the van!

Madeleine helped as much as she could and then, the bug having bitten (apparently, quite hard), she went upstairs and started to clean and rearrange up there -- the playroom, the kitchen, her bedroom!

May I say right here?  My three daughters, ages 16-22, incredible, cooperative, unprecedented, unsupervised, working together -- working hard -- all day, no fighting, no tears, and only one broken lampshade!  By the time I got home, they were all exhausted and hungry and very tired, but so proud of all they'd accomplished!

Holy crap, me too!  I was fully prepared for a morning of loading up Katie's stuff and an afternoon of unloading today (after a 2-hour drive), followed by a quick (exhausted and hopefully not-too-stinky/sweaty) cuddle with the nephews and visit with my sister, followed by two more hours driving home with Mom...  Instead, all of Katie's stuff is packed and in the van and I didn't lift a single finger!  (That'll be today.)

Knitting:  I knit out last night and knit my third (which is actually the second) Master's swatch, and I'd just like to say that K1, P1 ribbing is ugly -- a thought unanimously echoed by all other knitters in attendance.  I've done my best, it's much better than previous attempts (I switched from metal to bamboo needles and that helped), and I'll just have to wait for the verdict... time to move on to another.

What great girls! A testament to their mothering for sure! Kiss that new baby head for me and take in an extra deep breath.

I'd like your grrls to come live with me for awhile. ;-)
Their hard work and ability to get along are a true testament to their Mother!

Please, may I borrow your girls? They can have anything they want from my house if they just remove half its contents to Goodwill.

Have you tried combined knitting for the ribbing? It made my ribbing look much better.

That is great, I would be dancing if my boys worked together like that, at the moment, fat chance! Have fun cuddling your sweet nephews.

They are growing up!

So, uhm... next time I move... are they available? Not that I plan on moving, again, anytime soon... but options are always good to have. :o)

I wish I could motivate myself to get going again on my swatches. I think about it a lot, but thinking about it doesn't accomplish very much.

that story does a mother's heart good!

Congrats on the mommy skills!

I'm ready to cast on the 1x1 rib swatch now. I decided to wait on the 2x2 until I had a chance to put it further from my memory. I don't need anymore meltdowns right now. *grin*

I'm at the stage now where I will knit my best and submit to the powersthatbe and see what happens.

Makes me want girls, three of them! Those baby feet. I just want to kiss them. Something about baby feet....

So nice when the fighting stage passes! And it must be nice to accomplish all that without doing a thing! Good luck n the swatch, I know you'll get rave reviews :) Those little teeny tiny toes! oooooo:)

Wow that is a feat unto itself. 3 girls and no fighting. Sounds like they had a very busy day for sure.

Those little feet are just too cute!

How rewarding for everybody! Those little toes...sweetness!

As we make preparations for our exchange student who is coming on August 30th, you wouldn’t believe the amount of cleaning, rearranging, purging, etc., we are doing too. It’s cathartic – almost! ;-) p.s.: Wasn’t Madison crazy?!

Don't get discouraged about the swatches...some days none of them look right. You can always find a mentor to look at them if you are truly concerned about them being accepted on the first try. :)