Back to the blocking board?
Smitten + Mitered + Mittens = Smiterittens 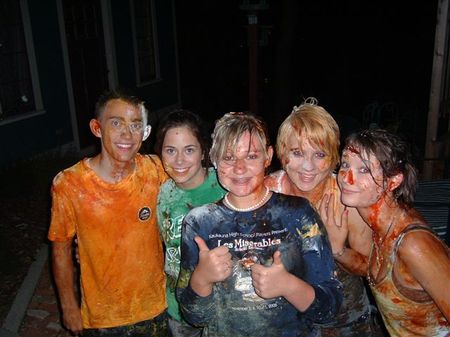 Did I mention the food fight?  I think I did.  A couple of weeks ago, Maddy (second from right) and some of her friends went grocery shopping for gooey stuff and took it all to a park and had a fun time flinging it at each other.  They came to our house for hosing-off when it was over.  My dad was visiting, at the time, and had the presence of mind to snap a photo, which he sent to me the other day.

None of them can stand the smell of ketchup and mustard now.

Look at those smiles.  They're not drug- or alcohol-induced.  In my mind, it was money well spent.

I finished an EZ Mitered Mitten last night -- still have to do with thumb... and the other mitten.

Today, for the first time, I'm heading out to work in the field.  I will be out of touch all day -- and it may even be a longer day than usual (I normally work a 10-hour day, so...).  There are some "things to do" on the weekend, but there should also be time for fun stuff.  The Packers are playing the Vikings this weekend, which will likely be the game that Brett Favre breaks Dan Marino's record for touchdown passes.  Did I ever mention that I once shook Dan Marino's hand?  Bart Starr's and Reggie White's, too, but it was with Dan that I set my own personal record for biggest sports fan dork moment.  It's a record that won't likely be broken.  Heh.  ; )  My Fantasy Football matchup is spectacular this weekend, too -- the closest game I've ever had, I think -- so that should be fun!  Y'all have a great weekend!

Yesssss! I've been waiting for the food fight photo!! It's fabulous. Maddie (of course) look so very sweet and spicy! I'll be sheering with you this weekend (closet Packer fan) even tho Bret is likely to set the "most interception" record as well. I guess it's the 'sunshine with rain' with kind of thing. Have a terrific weekend!

What a BUNCH of hotties! Funny that the girl's tee shirt in the front says Les Mis, and before I even noticed that, I thought, "This looks like the cast of a Broadway show."

Good clean fun -- worth the money, as you say. Have a great day. I've been working my tail off doing all things I love to do. It (almost) doesn't get better than that. To love one's work (finally) is such a treat.

Looks like they had some good holesome fun. ;) Oh the things that they can think up when minds are clear of drugs and alcohol. What a hoot.

how many points do you think they're wearing? have a great weekend Vicki!

We could all take a lesson from those kids! IN fact, I think I may need to send my husband to the grocery store.....

I am going to confess something, I don't really do football. I used to watch my local team with my dad as a kid but never really became a fan. Well, I have a new boyfriend and he seems to watch quite a bit of it (even without a stake in the game) and so I sit and knit and remark on what seem to be good plays (like I would know). Regardless of the game, and who is playing, all the announcers seem to be able to talk about is your Packer's Brett Favre. It is amazing how often his name comes up in a game he isn't even playing. (and let me tell you how I am waiting for hockey to start next week so I can pull a little sway and at least we can watch a game that I understand).

okay, so inquiring minds want to know - what was the embarassing sports fan dork moment with the big D?

btw - the kids look great - was a fun game that must have been.

Brett broke that record yesterday!!! Go Packers! I'm so anxious and excited to see how they weather the entire season.

I love reading about your Packer love. I'm getting married in 3.5 weeks in Mexico and my fiancee is from Madison but my family are all from Mississippi and close friends of the Favre's. I got him a signed Brett Favre football for his wedding gift. Now I'm superstitious about that ball and how it may have had something to do with starting off the season so well. How ridiculous is that?

I love that you say it wasn't drug or alcohol induced! HAA! Silly kids.