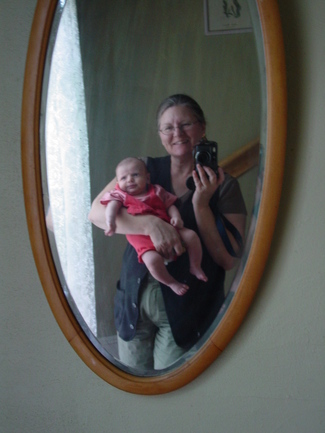 Holy smokes!  Watching this little armful is tiring work!!!  It's been a while since I've had to sustain that "always-on" state for any length of time.  It must not have been too bad, though, because I look pretty happy in that pic!

I made a quick trip to Madison after work on Tuesday to watch the wee one while my sister went in for a day at work yesterday.

Addison is 6 weeks old and he's so darn cute!  He's starting to interact a little bit, showing some personality, responding with an occasional smile.

Yeah, and the cuteness quotient borders on overload when Mack's in the picture, playing his "guitar" (a ukelele given to him by a neighbor) -- and he's talking so much, it's hard to keep up with the -isms.  As he was leaving yesterday, he said to me, "I'll see you after soon!"  He calls the pacifier "Knut" (instead of Nuk), or as my BIL prefers to think, "newt."  Heh, who knows -- it's cute as hell either way!

I had the chance to zip over to Lakeside Fibers with Katie for a late lunch and... to look at some yarn! 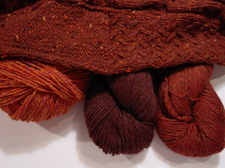 Across the top in the photo at left is the Hand-to-Hand Aran -- I'm almost to the last hand, only a few more decreases to go.  It's clear that I'm not going to have enough of his yarn -- and not only has it been discontinued, but his particular color and lot are of long-buried vintage, left-over inventory from my LYS's previous owner.

I stopped at my LYS before leaving town on Tuesday, thinking that I could find coordinating yarn to work in somehow, and I came out with the Harris Tweed pictured at left.  While searching for likely suspects at Lakeside yesterday, it suddenly occurred to me to do the entire body in a different yarn, rather than just part of it -- which may (very likely) just end up looking like I didn't have enough yarn and/or just plain stupid.  So in the middle is a fantastic color of Cascade's The Heathers, #9408-Cordovan, and on the right is Berocco's Ultra Alpaca.  I've got some swatching to do.

I also made a stop in Beaver Dam on the way home to meet, chat, and knit with Kathy!  That's a stop I'll definitely make again!!

Let the games begin!  We're gearing up for the first baby shower game at Cara's baby shower blog -- we're going to be partying over there for months, and it's never too late to join in.  Let me know if you want the log-in info or wish to be a guest author.

There are games?!? SO NOT FAIR! I want to play!

Addison is so freaking cute I can almost stand the puking. Thank you! Now you'll be an absolute pro at Rhinebeck 2008. I'm leaving the baby with you!

I like the way the Cascade coordinates a lot. Addison is a cutie!

What a cute bundle!

Cute baby alert! I really love the color of your sweater. I hope you can finish it!

I'm serious--during one of your trips to Madison we'll have to get together! I may have to drag my two kids along, but it'd be fun! Addison is soooooo cute. Hey, i'd love to participate in Cara's virtual baby shower--please send me the login info. Thanks!

Thanks for the cuteness injection! As far as yarn goes, I'm really digging the middle colour. And regarding the baby shower blog, can I play too?

If you are looking for a close match I would go with the one on the right.

That wee one is so darn cute.

I'd love to have the log-in for Cara's shower. What a fun idea. That's a cute little bundle your'e holding there yourself.

Oh Vicki - he is adorable! I'm so jealous that you have a chnace to play with a baby AND Mack - at the same time.

Ouch! I'm so sorry about the yarn shortage... but this contrast-color idea is intriguing. Very curious to see how this pans out...

It was so great meeting with you and doing the chat/knit thing. As a solitary practioner of the fiber arts, it's great to get together with someone else once in a while.

And you rock! I had such a great time.

Addison is adorable! Babies everywhere! So exciting! And games, that's perfect!! What's a bloggy baby shower without games! Oh, and here's a game for you! You've been tagged for 8 Things About Me! Here's the link http://kellyjo32.blogspot.com/2007/09/tagyoure-it.html

Oh, Addison is so adorable! I would love to attend Cara's baby shower too.

OMG! Addison is getting so big! They change so quickly in these days. Amazing how little ones can bring so much pleasure, yet wear us out. This is why we have biological clocks! ;) Time to hit the shower!

Great photo. It's a good thing babies look cute so much of the time since catching a particular instance of cuteness can be so hard. Can I get an invite to the shower, too, please.

Would you have enough of the old yarn to do a two-color hat or scarf to go with the sweater and make the bi-tone look even more intentional? Do you wear hats or scarves? There is that interesting beret in the latest knitty.

That baby is so CUTE! Look at thos pinchable cheeks!!

That is such a great photo of you and Addison! I think I see a similarity in the mirror with the auntie!

What a great photo. Those little ones do take a little out of you, but what fun they are. Enjoy!!! I'm looking forward to seeing how you resolve the "out of yarn". I'm afraid I'm going to run into the same problem with John's Aran. I'm up to decreasing on my first sleeve at the armhole. I have one more sleeve, the button bands, and the trim on the pockets to go and I have 3 1/2 skeins left. I did buy some more of the yarn, but it isn't the same dye lot and I can tell a slight difference. My thinking is that if I don't have enough, I'll use the back-up yarn and dye the whole thing another color if it doesn't match to my liking. How's that for a plan? ;)

Strangely enough, I'm always looking for someone to have a kid that I can actually knit for. So count me in, although I have a feeling Cara will end up with two dozen pairs of the learning baby socks from Cat Bordhi's new book.

Wow am I out of it! I missed the Cara Baby Shower News. Wow!!!