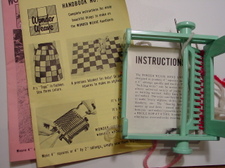 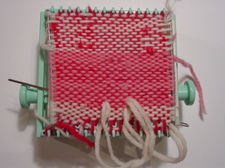 I'd say a little of both.  Some of it's a bit iffy, but that's all in the eye of the beholder. 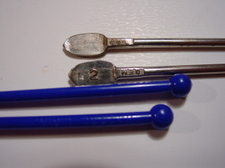 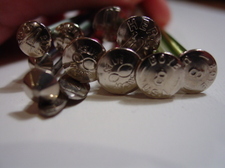 Truth be told, some of it's already made the trash heap. 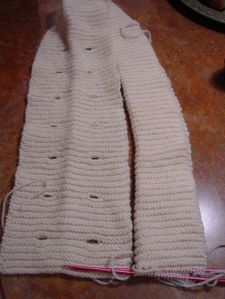 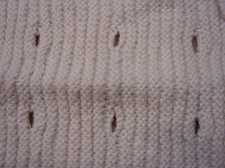 But some of it is just too curious.  What in the world is the intention of this knitted piece with all the "buttonholes"?  Any guesses?  It's still on the needles, but there's no yarn attached, and it didn't come with a pattern.

Those blue needles are short, plastic, and marked "Hasbro, Inc."  One of the smaller size metal needles has a serious hook at one end that almost seems on purpose, but I can't imagine why.

This is just a portion of my Saturday haul from just down the street.  There was an estate sale there at the end of July -- it was the day before I was to go up north for the weekend, but had to cancel because I'd wrenched my back.  It was kind of overwhelming then, plus I was hobbling and in pain and not in the mood for much, and I was mostly just curious about the house.  Of all the houses on my block, it's the only other one that I'd consider living in -- it's been "in the family" for 95 years and is relatively untouched.  That is both good and bad because it could have used the touch of a good handyman (one skilled in the repair of plaster) a long, long time ago.  I suspect (and recommend) that it will have to be gutted.  Oh, all that work, on the one hand, to consider with some very fine and unique features on the other -- beautiful, original lighting fixtures and sconces, french doors, leaded glass windows, beamed ceiling, hardwood floors, oak pillars and woodwork and stairway (and a back stairs -- I love that!), TWO oak doors with beveled oval windows, very old old old fixtures for curtains and doorway coverings.

Anyway, even after a well-publicized and successful estate sale, there was still plenty to pick from.  Besides the items above and what's already gone in the trash, I found a very cool bushel basket type thing, a very useful kitchen cart on wheels, several baskets, and two boxes of dishes and glassware.  I spent a whopping $7.50.

I hauled home a spindly, hand-made baby changing table ($5) from another sale that will work well to store yarn and/or books in "Vicki's Room."  And I found a large end table, ready-made for a mosaic project (reference two boxes of dishes, above, in addition to burgeoning stash) that I may eventually swap with the gorgeous, but small, Victorian one that I use as a chair-side worktable.

I love the little loom - they're very hot right now!

My guess is that the scarf with the buttonholes is meant to be attached to the buttons of the wearer's coat, to keep the ends out of the way. Or possibly, buttons are supposed to be added to the other end of the scarf and it buttons to itself.

My other guess is that the hook on th eend of the needle is fo rpicking up dropped stitches.

Ooh, ooh, I didn't think of that -- I think Jenny's right about the scarf.

My thought was that one could weave yarn or ribbon through the holes. But the coat thing makes more sense.

I agree with Jennu about the scarf.

As for the hook could it be for the cro-knit that has been out. There is also cro-tatting. I know that my LYS carries circs. with a crochet hook on one end and a knitting needle on the other.

I think the buttonholes are for weaving ribbon through. Perhaps if you draw it tight then it ruffles?

I am going with Jenny's second option. I never find anything of interest at estate sales. Maybe I am doing something wrong...or I am just going to the wrong sales...

I think it is the button/buttonhole band that needs to find the sweater it is supposed to be sewn to.

I was just about to post what pj said -- I think the Unidentified Knitted Object (UKO) is a double-faced button band, to be sewn on to a cardigan from which it has sadly become separated (or perhaps never knit; but most of us wouldn't knit the button band first!).

I guess the true way to know the value of your items is to post them on ebay. If there's a market out there for them, you're sure to get the going rate! I love old finds. Maybe the holes are to add lace?

Hey I'll buy the house! You always find the coolest stuff! I wonder if that's some sort of buttoned down scarf or are they for fringe? The hook things may be old crochet afghan hooks or an early form of a locker hook.

Hasbro is probably the second largest children's toy maker in the United States. It's corporate office is located in Pawtucket, R.I., and now most of the toys are manufactured in China. My guess is the reason the needles are short is because they were for children and part of a kit for to learn to knit, or perhaps to make something for a doll? Hasbro is famous for things like play-doh, Scrabble, Monopoly, Candy Land, Star War figures, Mr. Potato and many more toys and games.

The knitting crochet hook thingy is probably an afghan hook. There's a picture on this site:
http://www.skacelknitting.com/products/index.php?main_page=index&cPath=2_36
My mother used to use them back in the '70's but I haven't really heard anything about them since then.

is it possibly a knitted sampler - someone trying out different buttonhole constructions?

how in the hell did I manage to miss that last post of yours?? holy cow Vicki - an escaped prisoner? but wait, no it's just the local sex predator?

I would have had a complete meltdown!

Hmm, I think the knitted buttonholes are just fine as a scarf with some interesting elements! Great finds!