I have fallen off the saucer.  When did that happen?  It must have been a long time ago, but I've only just noticed.  I did have a few early triumphs, and I don't think I've added TOO much to the UFO pile this year (that's not sayin' that the project list/queue hasn't grown) (shall I thank Ravelry in every post, tongue-in-cheek or not?).  I'll have to climb back aboard and see if I can't resurrect my resolve for the resurrection through the end of the year. 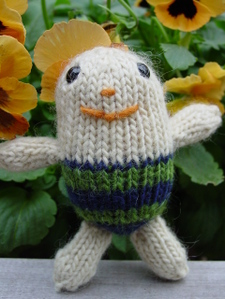 Can you feel it?  That end-of-year, new year's a comin' feeling?  The holiday hoopla will soon start.  The weather has thrown me off -- it's been so mild, it's almost surreal -- and I wonder if it'll ever get cold enough to snow.

The light was not great last night -- it is not my favorite place to meet, but the company more than made up for that.  I managed to sew down all the ends on the shawl -- thankfully, that particular ribbon yarn is  somewhat forgiving even if I wasn't exactly a neat-freak in the doing.

I finished Oddfellow!  Alison has dubbed him "Bean."  This is for her friend, Ben, and I like it:  Ben & Bean, Bean & Ben, Ben's Bean, Bean's Ben, two beans in a pod.  Ben has always loved Oswald (Ali's Oddfellow), and has told/asked/begged me, sweetly, a hundred billion times how much he'd love one of his own.  I discovered a few weeks ago that Ben & I share a birthday -- and that tipped the knitting needles in his favor.  I have one more to make, yet-unnamed (YU), for a girlfriend of Al's who has also been sweeter than sweet (my kids have really lucked out in the friend department), and after the group photo shot (Ali's request -- in fact, Bean is forbidden to leave 'til then), Bean & YU will be on their way.

Being a newbie to the central CA coast, I'm finding that I'm having a hard time getting into the holiday knitting spirit, too. After all it's 60 outside still! So when you do get some snow, share pictures? :)

Bean is 100% adorable. I love his little orange mouth and stripey suit!!!

Bean is so frickin' cute!

That little guy gives me a major chuckle. You should make a family of beans. A baby with a diaper....hee.

I fell off that UFO resurection saucer a lo-o-o-ng time ago. But I haven't done much adding to the UFO pile. I've become more focused on finishing one project at a time.

And as for Bean, Bueno!

I think my Jon shares your birthday too! Does that mean he gets a bean!

I've fallen off the saucer a couple times. I think I made up for it by frogging/resurrecting three things in one month. (that's my story anyway. ;)) actually, if I do something today and balance things out with the month of plenty, I'll be back on track. off to find a UFO...

I called Little Sir "Bean" when he was "in the oven," so I am predisposed to like anything called Bean! Very cute!!

I love Bean. Dang. Everytime I read your blog I find one more thing to add to my queue.

Bean is so adorable. I can't believe that Christmas is so close. It just doesn't seem possible.

Bean is so sweet. I notice the beautiful ORANGE pansies in the backround. I too am light conscious as the time is changing this weekend . You KNOW what I'll do with myextra hour: knit