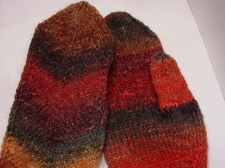 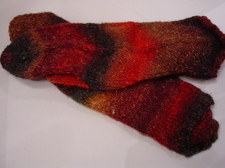 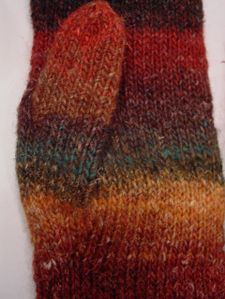 I'm calling these my Rhinebeck Mittens.  I cast on quickly on Wednesday night and knit a few rows of ribbing so that I wasn't caught boarding a plane with bare naked needles.  I know that the sticks don't raise many flags these days, but I figured five double-pointy sticks would be questioned even less if they were actually being put to use.

So.  I knit in the airport in Green Bay, since my flight was delayed by an hour (but I wasn't informed 'til I was half-way there), and on the plane to Atlanta.  I did not knit in Atlanta, though, because I was too busy running and making up time (WHEW, I made the connection).  I caught my breath, then knit during the flight to NYC.  I knit at night with Cara and Ann.  I knit on the way to La Isla Poughkeepsie while also playing the license plate game.  I knit in Poughkeepsie.

Then I did it all in reverse -- including the delay on the first leg of the return flight home and the sprint in Atlanta to successfully make the connection (owie, owie, owie, dragging my right foot the final 100 yards, shin splints, anyone? oh, how that hurts).  I finished the thumb on the way to Green Bay -- everything except weaving in the end, because I didn't have a needle -- and started the first of two Oddfellows.

The Rhinebeck Mittens are an adaptation of EZ's Mitered Mittens, one of the May projects in Knitter's Almanac.  Having tried short rows to alleviate pulling on the palm-side, with some measure of success, on the first pair, I had an idea to knit the palm side straight and try a gusset with this pair.  There is also some measure of success here and they are perfectly wearable, but still not PERFECT.  I think I may, one day, try again -- omitting the increases on the mitered side while doing the gusset increases to eliminate excess fabric 'round the wrist.  I haven't blocked either of these pairs yet, and some of these issues may even end up disappearing.  Wouldn't that be nice?

It's official.  They're going to "total" my car.  I'll get all the detail$ tomorrow.  It's a 2000 Saturn wagon -- which is 7 years old, though in car-years, that's more like 8 or even 9 -- with 132+K miles on it, and there have been some issues and not a little angst, and I fell out of love a little over a year ago (mostly due to the stupid "service" department at the dealership), but it's gotten me where I've wanted to go (except once, though I'd have driven straight into a huge snowstorm, so it's serendipity or something).  I'm not sure what's going to happen.  I am thankful beyond belief that there were absolutely NO injuries to any person involved -- oh, don't I know how lucky we were.  And in the big picture, my car is a very, very, very small sacrifice.  Thank you all for your kind words and wishes.  It's been a tough couple of days and they really do help.

they flew you to Atlanta to get to New York? I love crazy airline schedules! *rolls eyes*

the mittens look lovely. love the colors! I'm going to have to summon EZ from the library again...

love those mittens! I hope you are writing down all the modifications you made.

ps. you know, a little less knitting and more looking might have given you a better chance at the license plate game!

I'm sorry to hear about your accident, but glad that you're okay. I hope you're going to get checked out by a chiropractor if you haven't already - we were in a very similar accident (stopped at a red light, rear-ended & pushed into the truck in front of us) and I believe it was at least partially responsible for the lovely off-kilter pelvis and headaches I have been dealing with for the past 5 years. Even if you feel fine something may be out of whack.

Wonderful mittens, and such provenance! Great story and lovely yarn!
Glad you are indeed ok, and sounds like it won't be hard to say goodbye to the car (that's a respectable amount of miles). Doesn't take much to total an old car, eh? Saves you the ongoing decision-making about "Is it worth it to fix this? How much is it going to cost? When is the next thing going to go? When am I better off getting rid of it and getting a more reliable car?" Plus, my little Saturn SL2 is not the best in Wisconsin winters; maybe yours is (WAS!) better, but I think this model is better suited to down South!

I really like those mittens, Vicki. I am envious of people who can finish projects to quickly too. It's like a double whammy, a trip and a finished project!

The mittens are so lovely.

Sorry to hear that they are totaling the car. Can you get a salvage title and fix the damage with the insurance $? We have done that before, but I don't know your local laws.

The mittens are awesome, I love the colors. I guess that's good news about the car, right? You can pick out something you love now.

The mittens are fabulous in that yarn and I'd rather knit than play the license plate game any day;-)
Good thing you didn't love the car. Enjoy looking for the car you do love!

I loved watching you knit those mittens. Ann's right though - a little less knitting and we could've beat her bad.

I'm sorry/glad about the car. But mostly I'm just happy you're okay!

love those mitts. hope it works out well with the car detail$

I twitch whenever I think of Saturns. We didn't have a good experience with our 2000 sedan. It didn't last 65k miles(5k and 8 weeks out of waranty you know). Although, as much as *they* told me it didn't matter, I can't help thinking that hitting a 200 lb 10 point buck at 65 mph didn't help bring on it's ultimate sudden demise.

Lovely mittens - you might need them come next week from what I hear!!

Such great mittens! I love the colorway! I'm so glad you are okay...sorry about the car though.

Uuuuuugh about the car. But those are pretty fantastic mittens. The colors remind me of fall in New England.

OMG, I missed the post. I'm so very glad you're OK. You know I love the mitts and the yarn, but when I get these little jolts, I can't help but feel only relief.

I'm convinced you can't go anywhere in the U.S. without going through Atlanta first.

I love the mittens and the colors are great.

Glad you got resolution with the car. Good luck replacing it.

Silly me! I thought those were socks! Great mittens.