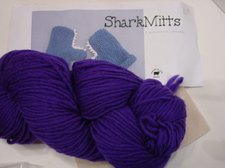 The Morehouse Farm's Shark Mitts, my other "big" Rhinebeck purchase, will be made this Christmas for Mack.  I'm not sure I'll do these entirely in seed stitch, as that's a wrist-killer for me, but they're small... they'll get done.  The yarn is super soft and squishy -- this will be a fun project.

I'd planned to run up to Loops and Links in DePere on Tuesday after work because I had an email that they received their Opal order, including the Hundertwasser!  (Had I checked my email, DH & I could have stopped to pick it up on our way home from the airport on Monday.)  Anyway, I've had Hundertwasser-on-the-brain and Ali was looking for some Tuesday night distraction, as was I, so she drove.  While we were there (surprise, surprise), she found some yarn for herself!  She chose some Lumpy Bumpy Yarn in the "Indian Corn" colorway and I found this great Worm Scarf pattern (thank you, Ravelry) (which I like more than Ali, but it's a start), and she is looking forward to doing some knitting during breaks at work.  She likes to knit, but has chosen some tedious projects in the past, plus she's impulsive and impatient and likes to see quick results, so they've all been pretty much doomed from the start.  Despite the flushed excitement with which she'd start these projects, they've all been abandoned.  I love being part of my girls' A-ha knitting moment(s) and I hope the Lumpy does it for Al.

I wound up the Lumpy Bumpy, the Morehouse, and the Autumn Hill and even started that AH Shawl last night.  This week has taken it's toll, though, so I've already had a substantial rip.

I am so very happy that it's nearly the weekend.  I plan on taking it easy, though the urge to neaten & cozy up my den has come on strong all of a sudden, and also hope to (must) catch up on some homework.  It'll be a good weekend for that.  I had to write a little blurb a couple of weeks ago for the class that I've had ups-and-downs about, not to mention serious doubts, and I got the paper back last night.  A+.  "A pleasure to read."  I have to say, no matter the circumstances, that feels good -- fills my tank for the weekend's work.

Congrats on that A+! Ride the wave!

I've been cleaning like a crazy person lately - it must be the change in weather. Congrats on the A+!

Yeah, Vicki! A+ That's fantastic! Sounds like you are not having any problem at all with that class. Good for you!!!!!

So funny - I sat looking at those shark mitts and the alligator scarves on Morehouse's site last night, trying to think of who I could knit them for, because they are SO CUTE!!
PS - I love your mitered mittens!

A+!!! You know, we've said it so many times before: Education is wasted on the young, and we oldsters are really the ones who know how to do it. :)

I'm just catching up on the car drama! I'm so glad no one was hurt. The car, as you said, is a small sacrifice. You got a new one yet?