Hahaha, I found this at Norma's today.  It may explain a few things, like why I've been in such a funk and why I've been doing everything EXCEPT what I should be doing (homework, housework, yardwork -- looks like anything to do with work!).

In another week and a half or so, though, I'll be nearly at my biorhythm zenith, almost a tri-bi-rhy-fecta!

Heh, looks like I'll have my cake and eat it, too, and then it's all downhill from there!

Look at what I made. 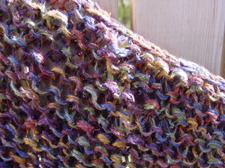 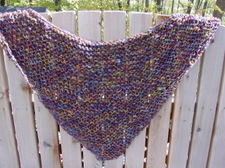 Autumn House Farm's "Garden Shawl," designed by Mary Jo Walters, using AHF's Shantung Silk, one hank (150 yds) in a color called "agate."  The colors are gorgeous.  The pattern called for 19US needles, which I didn't have (not even straights!) and did not want to purchase just for this, so I used 17s and it's just fine.  As I wrote yesterday, I started this on Thursday night and had already suffered a substantial rip by bedtime.  Apparently, switching from doing something on every other row to doing the same thing on EVERY row was too taxing on my brain.  Last night, I decided that I just could not recover, so I breathed deeply a few times and ripped the whole thing out.  As I rewound the yarn, I had time to contemplate and focus on just what was being asked and cast on the second time with confidence, casting off just before the end of the late news.  There's an event that I can wear it to tonight!  I wish it was just a tiny bit less pointy, but at this rate, I can rip and redo someday if it really bothers me.

Your Garden Shawl looks great. I love those colors. :-)

Be sure to make all important decisions next week! Buy stock! Buy a lottery ticket! Get a tattoo! Buy boots! Get new jeans! Hee.

Can't trust those biorythms. Mine are apparently peaking and nothing is going right!
I love the colour of the garden shawl, and the mittens below ( catching up) and it's all for the best with the car, right? Time for a new one.
You know the first time I used the hazard lights on my Saturn, the button stuck into the dash? I can still turn it on and off but it looks half in sideways.