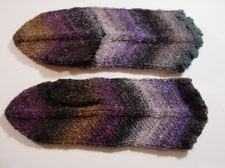 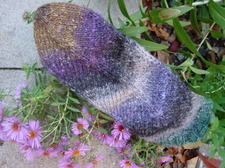 Look at that!  Through the magic of photography, I was able to make one mitten look bigger than the other.  Heh.  Yeah, right.  There may be a slight difference in length between the two, but nothing like that. 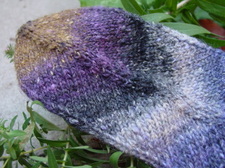 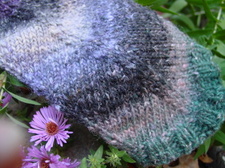 Mitered Mittens, a May project in Elizabeth Zimmermann's Knitter's Almanac.  I used one skein of Noro Silk Garden for each mitten and had some left-over.  These are nice and long, too.  I'll have to take a picture of them on -- the cuffs go well past the wrist and venture into forearm territory.

The picture at top left was taken of the finished pair this morning in crappy, first of October, early morning, indoor light -- if you click-for-big, you might be able to make out the after-thought thumbs (my first after-thought anything!).  The other three photos were taken outside on Friday -- that's the first mitten, sans thumb -- and are a little more true to color.

A quick, quick, quick project, and very satisfying.  I have a third skein in the same colorway and along with the left-overs of the other two and some black Cascade 220, I've started a wrist-killing variation of a narrow Noro striped ribbed scarf, inspired in no small part by Jared's.  This part of the project will likely last long enough to do some traveling.  The mittens and the scarf will make a set, and the set will be a Christmas gift for my sister-in-law!

The games are underway at Cara's baby shower blog -- Who's Gonna Be "The Boss" Now?

Now, if it were me, I would rather say that this was the first PLANNED afterthought thing I'd ever done! *Unanticipated* afterthoughts are not uncommon for me and often result in frogging and muttering.

What a difference the lighting makes with that yarn in particular. Great choice for the project! Hmmmm.... (goes off to rummage in stash....)

LOVE them. I have yarn all picked out to start my own pair. They are just too cute and I love the length. Nice work.

Wow - the Noro really livens up that pattern! Love them - and that's one of my all-time favorite Noro colorways.

Those mittens are gorgeous! Noro knit into mittens, what's better?

Those are some fantastic looking mittens. Mazel tov on BF's record yesterday.

Lovely mittens! Weren't you proud of how nicely we treated Brett yesterday? He's so awesome!!!

Love those mittens! It's so nice to have a project that you can't wait to pick up!

The mittens are really cool - - something you'll need no doubt since obviously Bret will be taking you to another Super Bowl.

Thank you for not gloating...

Gorgeous!!!! I love your mittens!

I sure did miss a lot of great knitting! Nice mittens!

Wow I love those mittens! I guess I should dig out my copy of the Knitter's Almanac. You know it was the first knitting book I ever bought (after the learn to knit one) and yet I've never made anything from it!

The mittens look great. Is it bad that you enjoyed them? ;)

I Love those mittens. Color is beautiful.

Love the Noro colors for these mittens.

I love those! Must not start more projects.... Oh alright just one more:)

What a great idea using Noro for mitered mittens - I may copy you!

Great mittens! And that Noro scarf is addicting. Witness:
http://kmkat.typepad.com/kmkat_and_her_kneedles/2007/09/addicted.html

Oh wow, those are cool mittens! Now I *really* need to find my copy of that book.

Great mitts! I have bookedmarked these! And I love NORO!

Mitten looks beautiful. But did you find that the thumb went in at a strange angle because of the mitre? I knit one mitt in Kureyon and ripped it out because of the feel of the thumb.