The truth about my obsession

Yeah, so between typing "Obsession" as the title to the last post and hitting "publish," I went in a completely different direction.  Not that I haven't obsessed about those things -- do obsess from time-to-time, will undoubtedly obsess in the future -- they just weren't the consuming obsession on my mind at the time.

The obsession about which I intended to write, but didn't because the story must have been getting long or time was running short, is the knitting.  Always very high on the list of interests, the obsession does sometimes show, such as on Thursday morning, preparing my departure for the airport to pick up my husband after a two-month absence, when it suddenly occurred to me that, with careful planning and a little hurry-up, I could fit in an opportunity for some fiber fun on the way!  I've been recently fixated, for various reasons, on Opal's Hundertwasser sock yarn -- the whole concept of it just fascinates me -- the mere thought was like fuel on a fire, so I checked the PT Yarn's Shop Lists and came up with a likely Opal retailer.  Loops & Links in DePere isn't exactly "on the way" to the airport, but it wasn't too far out of the way, either.  I'd never been there before, I could check out the just-opened, brand-new bridge and its shiny double-roundabout, there was a chance of yarn, and there's even a case for helping the environment by making it part of an already-planned trip -- all good reasons to give in to the obsession.  ; ) 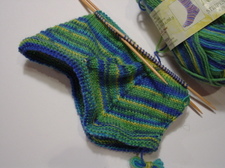 Alas, they had the Opal but not the Hundertwasser.  I indicated which colorways I was interested in, though, and they were going to check availability and let me know.  I didn't really have time to check out the shop completely, but first impressions were very favorable -- I loved the location, the storefront, and the interior space -- and now that I know my way... I'll definitely go back.

Meanwhile, I was involved in a three-way perusal of the results of searching "baby hat" and "baby cap" patterns on Ravelry the other day and, while someone wasn't as enamored with the Sweet Baby Cap as much as I, and the other is directly responsible for the possibility of my two little nephews soon sprouting horns, my love for the Sweet was renewed (it was already in my queue) and the next thing on my needles turned out to be a little cap!  I had a 50g ball of Kroy Sock Krazy Stripes and, really, what better use for it?  As of last night, it is finished -- complete with a 12-inch I-cord tie on each side!  The best part is -- the little one for whom it is intended will be in the house tonight!  Woot!

The obsession is working overtime this week as I prepare for a Thursday morning departure to NY and my third visit in as many years (which makes it an official tradition, I'm told) to Rhinebeck.  What to pack?  What to bring?  What to wear?  Like Norma, I will not have a Rhinebeck sweater -- the Hand-to-Hand Aran will make the trip, but merely for purposes of comiseration and consultation.  St. Brigid again?  It might be fun to compare with Jody's stunner, if she wouldn't mind -- half-sister sweaters.  Fib?  Williamsro?  Williamsro has never made the trip.  Heh.  Mostly, though, by the way things look, I'll be wearing a moisture-proof jacket with a scarf or shawl and mittens and maybe a hat.  I hate hats, but I think I've got a Calorimetry around here somewhere.

Well, not having traveled to a big knitting/fiber event, I haven't dealt with which hand-knits to wear -- just which knitting projects to pack, a question worthy of very serious consideration. (Yes, projects with an 's', of course, you understand! My husband doesn't....)
Clearly choosing the handknits to wear is also an important issue. And the sweaters need to see Rhinebeck, too.

And of course you would have to check out the LYS in the vicinity of/kind of on the way to the airport if there were time! How not?

What an absolutely adorable hat!

Is it supposed to rain? I vote for Williamsro, I'd really like to see that one in person.

Sigh...a little envy slips in as I read the end of your post. It looks like a wet Rhinebeck from what I can tell. Cara is determined to put the kibosh on ANYTHING fun we want to knit;-)

Ha, This will be my first trek to Rhineback after living in NY for three years. Finally!
I'm uber bummed about the weather. Its going to be 70 later this week, but not the weekend.. and certainly not sunny :( Mental note: Pack rain poncho and boots, with waterproof bags to carry Rhinebeck haul.

I will look for you this weekend, Vicki. I will be excited to see you not matter what you are wearing!

oooooooo ---- it's getting closer! how seriously are we sticking to WW this weekend?

Vicki that hat is adorable. I don't care what Cara says. :)

And maybe the first time I'll actually meet you will not be in Wisconsin, but in NY! We're moving to Boston in summer 2008, so definitely, by contract of moving I will be going to Rhinebeck next year.

Vicki, thanks for the tip on Someone's taste in baby hats. Even though I don't have my act together to post stash and FOs over there yet, I should still take advantage of my membership to search out stuff.

I bet everyone will have a good time this weekend even if the weather doesn't help. Maybe Denny will show up and organize yarn games like the ones Stephanie showed on her blog this morning. Though I'm sure those work better in a cozy conference room than in a soggy paddock.

I hope you have a fantastic time at Rhinebeck! I would love to make it there someday.

I've been obsessed with that little hat and made it not once but 4 times in the month of September. I KNOW! Insane.

I posted a pattern clarification for it on Ravelry and on my blog. I noticed that the increase/decrease round is done a total of 8 times... er... it's too hard to 'splain here. I'm Stephvw on Ravelry if you want to check it out there.

I love that shape of baby hat, so cute. Have a fabulous time at Rhinebeck.

I love those hats! Ah, once again, everyone's going but me. It's going to be a lonely weekend.

Hi. You can find out LYS stores that carry Opal at the new distributors site:
http://opalsockyarn.com/Stockists.html

Have a great time, Vicki! By the way, my husband and I will be near your neck of the woods this weekend and I’m going to visit one of your favorite yarn stores, Iris Fine Yarns. Yay!

I love the sweet cap and the new moms love the naturally made ear flaps.... Recently I knit one in light green and dark green striped and added bug pop out and antenna. It looked like a fabulous bug!

Okay I have to make this cap. SOOOOOO darling. I adore it and the precious face it swaddles!