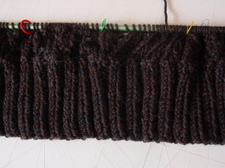 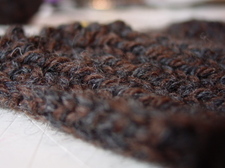 For all the knitting I've done, I should be just about finished with the back of Oblique!  But no.  Here you see an up-to-the-minute progress shot -- about four inches of knitting.  I'm just about to begin a gentle decrease to the waist.

First I was having problems with the left-leaning lace part, then a little bit with the right -- okay, a lot.  For various reasons, I ripped and re-knit that section countless times.  When I'm challenged by the knitting, reading, understanding and following the pattern, I always think what good exercise it is for my brain -- a little Alzheimer's prevention (though what it does for overall sanity is still in question).

I was finally humming along last night, in the groove -- YEAH, this is GOOD! -- and at about six inches, I checked the pattern and discovered that decreases should have started at four.  I practiced deep breathing while I held in it my lap for a bit, contemplating the difference that two inches would make in an already long sweater.  If my legs were longer... maybe.  If I wanted a sweater-coat... maybe.  And the yarn.  Would the yarn hold out?  I've already created a problem for myself regarding the yarn.

In November, I read Stephanie's post entitled Three Things and I haven't been able to get Thing Three off my mind.  I've been fascinated by Cornelia Tuttle Hamilton and the way she prepared -- or didn't prepare -- and held her yarn while knitting. I'd made a comment on that post:

... I can't decide whether it's refined -- because she, herself, seems so very -- or more primitive in nature. I am almost tempted to try it and see how I feel.

Yeah, I decided to try it.  Starting with a patterned cardigan just before Christmas maybe wasn't so wise in a house with three kids, three cats and one dog -- in any combination, at any given time -- all wanting, at any given time, to be let in or out or be fed.  Perhaps I should have started with a small project -- a hat or mittens.  Ripping and re-doing with the occasional jumping up to answer the phone or the door added even more interest.  I ended up with a bit of a mess, which I've untangled as well as I could before cutting off a tangled wad of unknown length of probably going to be needed at some point (I'll worry about that later) yarn.

How did I feel?  I did feel rather refined, but not very relaxed.  You know what, though?  I'm going to try again.  I know to be more mindful.  Holding the yarn that way rather epitomizes the way I want to feel when I knit -- I want to feel loose and relaxed, unrushed and (hopefully) untangled.  I like it, and I like that I have to think about it.

Back to Oblique... I also discovered that I'd made a big flub in the middle lace section, and ended up ripping out the whole thing to the ribbing and starting over.  I think I'm on track now.  Argh!  The lace is kicking this cable girl's butt! 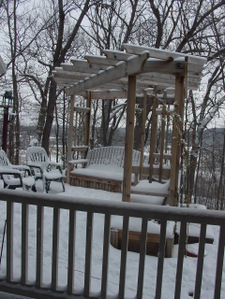 It snowed for much of the day yesterday.  This is the view out the kitchen window this morning.  We still need to shovel.  There wasn't a lot of wind with this storm, for a change, so the snow stuck nicely to the branches and trees.  It is so very fluffy, white and bright -- it would be blinding if the sun were shining.

Thanks for all the good wishes for our health.  That was one amazing little bug.  It was almost like being possessed for a day, it came and went so quickly, and with hardly a trace left behind!  My theory is that it all began with Mack and a play-date he had just before Christmas, but that little Addison was the carrier.  It seems that the people who smooched on him the most -- or who smooched on those who smooched -- were the ones who got sick.

Thank goodness for the weekend!!  I have to work on Monday, but then I have off on New Year's Day and then my "regular" day off on Wednesday.  I'm amused by thinking of it as a one-day work week.  Hm, why yes, I am easily amused.

I kept messing up Oblique's back as well - but it's all good now! And I deliberately made mine longer. The fronts are going quickly - much quicker if I wasn't suddenly possessed with shopping! ;-)

I love your yarn - what are you using again?

I love the yarn you are using. The close-up really shows the lovely colors. Patterns are funny little brain teasers. I *think* (hope) I have Williamsro's pattern down for the sleeves now after a number of "re-do's."

That's a good way to think of it -- Alzheimer's prevention! :)

I rather enjoy untangling yarn. (Yes, I'm strange. I'm okay with that.) You can send it to me for untangling if you need it.

Oy --- it's usually my husband who says to me "NO, don't cut it. Here let me try." Merry Christmas, Vicki and many blessings for a glorious New Year.

thanks for the heads up on Oblique... it's on my hopeful 'to do' list - such a lovely sweater, and totally worth re-knitting.
Sounds like there has been lots of brain exercising going on at your house (grin)
May you have a joyous new year ahead!

Good grief. i have a hard time with yarn already IN a ball/cake for cripe sake. While it is incredibly tempting to just unfurl the hank and knit from it...I know mysef too well...and I'd be tangled up in it in about 2.3 seconds flat!

Knitting does keep us on our toes and it can be a real adventure when we try something new. Good for you, grrl!

There's something theraputic about winding the yarn into a ball. You get to touch it and get the feel of it before you work with it. I could NEVER do that skein thing. N.E.V.E.R.

Glad you're feeling better after the short but miserable virus!
There's a picture on one of my posts today just for you, Vicki -- thought it might cheer you up! (Halfway down the long post; you'll figure out which one as soon as you see it.)

Sharing your concentration lapses ........must be more mindful while knitting. Thanks for letting me know even YOU have these times.

It's been snowing everyday here which is just perfect for my little California nieces - and so pretty. Not giving me much time to knit however!! Have a Happy New Year dear one - and all those kids and animals too!!

Here's hoping that you are right on track and there will be no more ripping.

send some snow our way. It just keeps teasing us and only leaving a dusting. If all the rain we have been getting would have been show we would have many many feet, but sadly that is not the case.