It's the most willy-nilly time of the year

If one came here today expecting to see a finished Tudora -- because, you know, the way I left it on Friday, it was all but promised -- and instead found an unfinished pair of never-mentioned slipper socks, would one be very surprised? 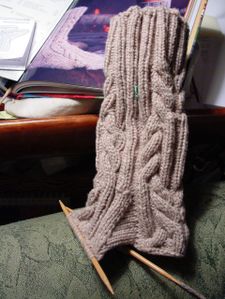 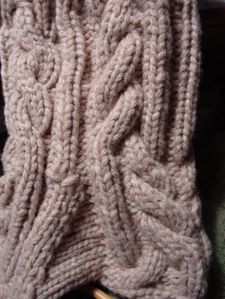 You see, I got out of work a little bit early Friday on account of the company Christmas party, and instead of using the full allotted time to primp and prepare -- because how much primping is really necessary when preparing to go bowling -- I used some of the time to stop at my LYS.  It was on the way.  Don't tell me you wouldn't do the same.

I browsed a bit while an order was checked, and came upon the inventory of suede soles for slipper socks.  I fondly recalled the fun I had making last year's Mackluks, as well as the pair for DH's birthday -- and my brother came to mind, his name still with an unchecked box on this year's gift list.  I'd been concentrating all my efforts on his wife -- the EZ Mitered Mittens & Noro Striped Scarf -- and really hadn't given him a thought... 'til now.  Mom suggested I knit a pair of socks, but no matter how much I love my brother, I am not going to knit a pair of size 13 socks, at least not at this late hour and with the hoopla of the holidays and a deadline.  Suede-sole slipper socks, on the other hand -- using BIG yarn and BIG needles -- could be knit in no time, even for BIG feet!

I was fully intending to knit them according to pattern, except knitting the leg in-the-round as I did on the other two pair, and chose a nice neutral shade of Cascade 220 to go with the dark brown suede of the sole.  I pondered variations on ribbing while I drove home.  Then I went bowling.

Bowling was fun, though I think there are muscles in one's body that are only ever used when bowling and they're still reminding me today that we haven't been acquainted in years.  I threw one strike and a few gutter balls (but not as many as you might think), never broke 100 (maybe not even 80 -- it was all in fun, I wasn't paying that much attention), and thank goodness we didn't bowl a third game.

On Saturday morning, I contemplated the slipper socks some more.  The 220 I bought was sure a nice color -- would make a nice Tudora, I thought.  So then I started thinking about the stash -- none of the other colors of 220 were good, nor the 128, but what about the Pastazza (Cascade being my go-to yarn these days, I guess)?  I'd used that two years ago for my stepdad's Log Cabin Socks, which he LOVES and my mother has mended a LOT.  Hey, what about modifying THAT pattern to attach to the soles?  And what about using Cork -- the yarn specified in the pattern for the Log Cabin Socks -- of which I have four balls in a completely uninspiring color from the gift kit that apparently didn't turn me on, either, for subscribing to the Rowan mag a few years ago.

It's a win-win!  My brother gets slipper socks in a quick-to-knit pattern, I use stinky stash, and I have yarn for a second Tudora... provided I finish the first... and first finish the socks. 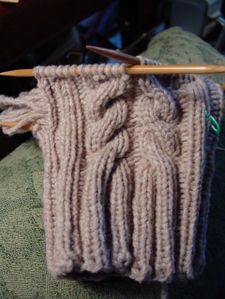 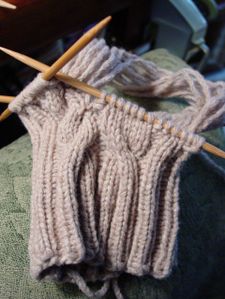 I told myself that I could knit on Tudora during the football game, but when I was at the point shown on the left, I discovered a misplaced cable that required ripping out and reknitting one entire section -- which I actually had to do twice because of a counting problem -- and that set me back a bit.  Grr.  Things went well after that, though, and now the gussets are finished and I'm ready to cruise straight down the insole to the toe.

Bloglines, bloglines why have you forsaken us! The slipper sock/Log Cabin is going to be perfect!!

I'm loving it! Makes me want to make a pair for me, and I've never considered it before.

Those look so cozy! Perfect for drinking eggnog around the yule tree!

I think your brother will love the slipper socks. And I'm loving the color!

Ah, the old knit, rip, knit. I am suffering that malady quite often myself lately.

I love your logic - you would have fun working at a LYS... I went right in and found yarn for my own Tudora Saturday thanks to your enabling (oops, meant to say inspiration)!

I agree with your other commenters, those will be great cozy brothermuks.

Your socks are coming out beautifully!

Ooooo those are going to be so nice. I bet he will love them.

Log cabin slipper socks are a great idea! I wish I had thought of that a few weeks ago. At this point I have to soldier on as planned, I think! And the stinky cork? Looks pretty yummy from here. I think there are a lot of people who would pay good money for stinky cork! (See how many google bites you get for that one!)

Hmmmm, wonderful socks. My feet are cold right now, and I don't have any heavy slipper socks. Looking at yours make my feet quite envious!!! We are having lots of heavy snow here in southern Wisconsin right now--Your socks are wonderful, absolutely wonderful!! What a lucky brother!!