Tied up with string 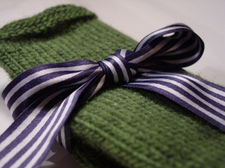 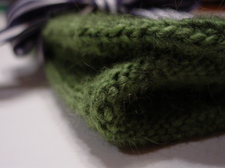 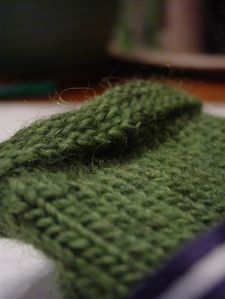 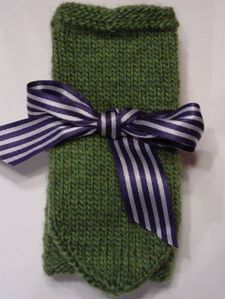 These are a few of my favorite things.

Mittens for the Soaring Eagles Project, based on this pattern -- it's the one I started with, anyway -- but without the snout.  In the end, it just didn't look right -- and it was green.  Nothin' wrong with green pigs, mind you, but my mind started wandering toward Miss Piggy and Kermit and, well, no. It just didn't feel right.  I'll try the piggie version another time.

That reminds me!  Someone at Knit Night on Tuesday said that Cookie Monster's first name was changed to Veggie Monster or something stupid like that.  Give me a break.  Oscar The Grouch had his name changed, too?  I am afraid to verify these rumors... afraid that they're probably true.  WTF?

I'm sorry for the digression.  Back to the mittens.  I cast on over two needles and knit the cuff rows, as specified, but P2tog'd the cast-on edge of the mitten with the stitch on the needle, securing that edge rather than just letting it roll (which, I'm sure, would have been fine), and I like how it turned out.  It's sturdy and a little more flat than round -- just a little different.  At the top, I just decreased every other row for a bit, then every row for a couple, then ran the yarn through and cinched it.  I'm thinking this is for a 4- or 5-year old -- dimensions weren't readily available, but that's my guess/intention. 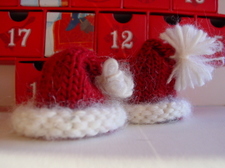 I forgot to mention that yesterday's Santa Hats were based on this ornament pattern by Susan B. Anderson, found at CraftSanity.  I used the same number of stitches, but a US6 needle -- and some LaGran Mohair along with the Lamb's Pride Worsted for a row or two more at the brim than called for, and I tried a couple of NOT-the-dreaded-bobble treatments for the tassle.  I tried, I really did, but then I got a frustration-induced hot flash and that was the end of that.  You haven't seen the last of these.

Jody has done it again.  She posted pictures the other day of a beautiful bias scarf that she'd just finished -- reminiscent of Clapotis, but completely different -- with a lovely, little-bit-lacy edging.  There was plenty of interest, and she's now posted the pattern (including charts!).  Thank you, Jody!

Speaking of Knitty, the new one is up and... wow.  What don't I like?  In no particular order, Ice Queen, Tudora, Justify, Laughing Carrots and Jeanie are at the top of the list -- and it's a TIE.  I think it's about time to sit back and regroup, examine the To-Do list and stash, and determine a plan of action... or listen and see what speaks to me loudest... or just cast on a bunch of stuff and come what may!  Something will start singing and there's bound to be an FO or two at some point!

I'm feeling a little more jingly today.  I got some cell phone and insurance business taken care of yesterday; my credit union's new online banking thing DID finally go live, and only a couple of hours late; and there are four packages ready to mail today.  I went to the "Cheer Party" at Ali's Starbucks last night and, basically, had my supper with all of the samples they handed out ("Here, have one of each!"); and St. Nicholas remembered to do his thing.

I still haven't decided what to do about a tree, but I bought some lights.  They'll either be used to brighten up dark areas on the big, fake tree that's in the basement (I've just been leaving the lights on), or to light a small, fresh tree that will be decorated with only the girls' ornaments.  I have heard some Christmas carols, but haven't played any yet, even though I've talked about it plenty (that will help -- a little Andy Williams, Johnny Mathis, James Taylor...).  Catching up with the season opener of The Closer helped, too.

The mittens are sweet. And damn you for linking to all those patterns!

Oh I have been to the new knitty and there are some great things this time.

From what I understand is that they were trying to change the names sometime in 2004/05. There was a big uproar about it so they decided to keep the original names. All the PBS and Seasame Street sites still call Cookie Monster and Oscar just that.

Snopes says the Cookie Monster name change is false, and the rumour was started by some comment somewhere else.

And you didn't even mention the "whale-tail" socks in the new knitty!

Did I miss the The Closer season premiere? Garbage. I will have to troll around TNT till the replay it. I am glad you are feeling a bit more jingly.

Your mittens are great: thanks for all the links as well.

Love those mittens- though sort of sad they aren't "frig" progeny!
Isn't knitty wonderful this time? I really heart ice queen- gotta do that one, and I'm excited, as it will be my first lace with actual lace weight. Exciting.

Whew! I'm glad to hear that Cookie Monster remains and that Oscar the Grouch is allowed to be one.

Love the mittens, and the photos of them are gorgeous.

As the mother of a 3yo who has to watch Sesame Street every day - I can say that Cookie Monster and Oscar are the same as when I was a kid, though Cookie has branched out and now eats veggies, letters, rocks, etc as well as cookies. Oscar even has some grouchy "friends" now.