Neighborly
I is for... 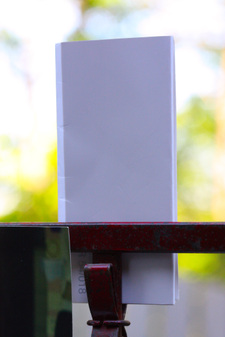 I had such a great day yesterday.  I got some work done at home, caught up with a neighbor while walking the dog, took care of some banking business (I'm official), went out to lunch, did a little running around/shopping with Mom, fit in a little grocery shopping, and got a package polished off and shipped.

I've been spending a little time every day getting my new workroom ready for painting.  It's the room most recently vacated by Alison and previously occupied by Katie; though never inhabited by Maddy it was my (& DH's) first bedroom in this house; for many years it was known as The Studio Annex and was no one's bedroom at all.

A few years after we moved into our house, DH added on to and converted part of a huge wrap-around rear porch into a studio to do painting and framing; he outgrew it after a while and took over the downstairs bedroom after some reapportioning of the rest of the house, hence The Studio Annex, which we often shortened to simply The Annex. Katie thinks I should call it The Annex again; no doubt, the girls all have some great growing-up memories associated with that space.  The new color, shown above-right, is called "Disco Ball" and I'll admit that I chose that particular shade of gray because of the name.  She works hard for the money!  Painting should commence soon and conclude over the weekend.

I bought three things yesterday -- all three on impulse, all three very reasonably priced, all three like unexpected treats and making me very happy!

I've been wearing earrings again and found (1) a cute turquoise pair made by a local artist (the mother of Maddy's prom date) at the new florist's shop, which we checked out for the first time.

I found some curtains to use in The Annex, but they're dark and don't always need to be closed, so (2) the vintage glass tie-backs I found will be put to good use.

The thing I'm most tickled with, though, is (3) this old potato chip rack -- there are little clips on both sides and some of them on the top row are turned to hold things up.  Dang, I'm going to have a BLAST with this thing!

And there was knitting to round out a most excellent day.  I finished the ribbing at the bottom of Mack's birthday sweater and have started the body.  The time is fast approaching that I'll have to finalize the design and (ugh) do the math.

Love the color, love the rack and would love to see the earrings!

How great that you had such a good day! Love that potato chip rack, what an excellent idea!

Things sound so lovely in your neck of the woods. Can't wait to see The Annex when you're done.

I love the potato chip rack - but I'm just struggling with its function. Congrats on you "officialdom".

That does sound like a good day!
I love that you have an Annex, I know you'll put it to good use.

A great day INDEEEEEEED! It's nice that you appreciate the little things, too. That's what makes all the difference. XO