...for every time I've said, "Third time's the charm" as it relates to knitting and my getting it, well, maybe I'd be going to NYC in August and to Rhinebeck in October instead of only the former.

And I sure do hope that the third time is the charm! 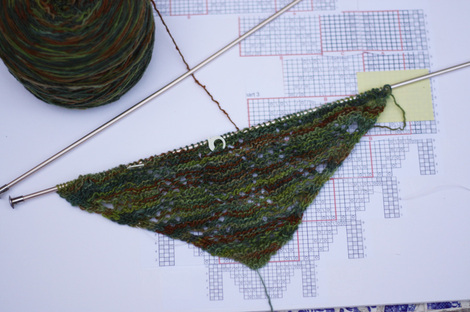 See this?  You've seen it before -- on Monday, actually.  Imagine it at least 20-30 rows longer, with another lifeline inserted along the way, and then completely frogged.  Now, imagine it again, though resting atop a complete cut-and-paste chart -- no second guessing about what happens in the gaping void on the left -- and in a stockinette version, as written and intended, rather than the abomination in garter I was concocting on my needles.  I am certainly lacking in all areas when it comes to working lace, I'm just not sure where I'm lacking most -- comprehension, focus, patience, practice.

In other news:  I weighed in yesterday and, after posting little or no gain in the previous two or three, marked a 1.8-pound loss in a week.  I still have not posted a gain since first stepping on the scale on June 15th and it's becoming a bit of an unintended challenge and motivator to keep building the record.  I'm a little lackadaisical about it in some respects so I'm not sure what my total loss is, but it must be very close to the magical first 10.  Then 10 more, and 10 more, and maybe a few more after that, and I'll be good.

Patience. It's just knitting and purling (I assume) - both of which you know how to do (I assume). It's just one stitch at a time which you can do(comprehension and focus). You seem to be patient with other aspects of life (weight loss) but just not with knitting lace then???

I'm glad I'm not the only one lace-impaired.

Congrats on the weight loss! To me that's a bigger accomplishment than knitting lace.

Patience is what I'm reading between the lines for both knitting and health. Thanks for the reminder. Congrats on your progress.

Whew. In my knitting community, I'm surrounded by lace overachievers. You know, the kind who whip up gorgeous lace shawls in two weeks, the kind who write patterns that become famous. It's demoralizing. Then I read about you having to frog, and frankly sweetheart...I am SO relieved!!! Now you must be a role model and keep going until you are successful, so I will be inspired to keep trying again too.

And jeez....weight loss too! I want to be you when I grow up.

I don't know what it is either but I HAVE IT TOO! I love lace and want to knit it so badly but so far, the results have not been good. I wish us both lots of luck!!!