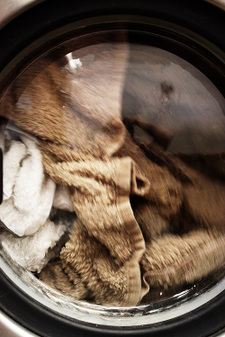 Yeah.  My day took a tumble down an unexpected path yesterday... with heavy wet towels... and underwear... and stuff.

It's quite possible that on Tuesday I was foreshadowing the dark days that descend when one's washing machine dies.  Maybe I had a premonition or something.

By the time I discovered that there was a major problem yesterday, Maddy had already thrown one sopping wet load into the dryer and started another in the washer.  I had to let it go, then experienced a little deja vu as I tried and tried and tried to get the damned thing to spin.  Nothing doing.

I looked up the previous service bill (April '07), opened the phone book to appliance repair, then decided that I was just not going to go down that road again.  I sure as hell wasn't going to pay $500 for another circuit board; further, I was not going to pay someone to tell me it's time for a bullet.  I'll call that myself!

I am finished with the Maytag Neptune!

The Maytag Neptune is done! 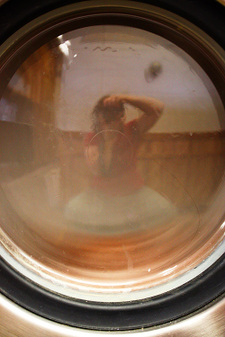 I'm hoping I'll feel the higher love for my new washer, but I won't know for a week!  It's not like I do laundry every single day anymore, but knowing that I can't... !  I feel like I should ration underwear.

I finally made it to the laundromat at about 3:00 and had to run entire cycles, of course.  The clothes were clean, so I didn't really need soap, but it's weird to throw in a load and not add detergent.  Plus, the place is disgusting.  It's been years since I've been there; the previous owner was on-site most of the time, but the new owner obviously doesn't care.  I didn't make myself comfortable and didn't look around too much.  This was an in-and-out mission and I'll have to do some recon before the next.  Anyway, I was going to buy one box of soap and split it between the two washers, but couldn't figure out how to get coins into the slots of the vending machine!  There was another lady there and I told her that I felt like a complete idiot, but she came over and couldn't figure it out, either.  So, WHEW!  (Or then there were two.)  The front-loader had a window (my new one will, too) and I could see soap bubbles -- so what we ended up with were clothes that were washed once and rinsed and spun a bunch of times.  I have to say, they smelled VERY fresh and clean.

Surprisingly, I did manage to get a few other BIG things done yesterday, just not quite as many as I'd planned.  And absolutely no knitting.  I'd brought it to the laundromat, but I didn't want to sit down.

Ick. Good call on it all. I remember the last time you went through the washer woes. Here's to a renewed feeling from a new washer.

gah --- reading your story is reminding me of last year's dryer debacle in this house when D#1 put an entire sopping load into the poor machine and snapped the belt. I am somewhat glad to hear that you don't also need a new dryer after all of this!

Oy! That is no fun. I hate it when the washing of clothes appliances bite the dust! Good call on the not sitting down thing. Our nearst laundromat is like that too. blech!

Plastic parts.
That's the two evil words that I have been told cause all the appliance woes these days. They just don't make 'um like they used to.

Ahhh - the laundry mat. I remember, as a kid, hauling all our laundry to town because the septic system was on it's last legs. It was always hot, but thankfully never dirty.

Razzafratzzin' washing machine! Having been through it not that long ago myself, I know of what you speak. Not fun.

RIP Maytag Neptune. Um, exactly what are you wearing in that reflection we can all see in that picture 'cuz it looks like a green tutu?

What kind of washer will you get next? As the proud owner, sorta, of a first generation Neptune, I am curious about Where We Go Next.

Oh no! Laundromat. Too bad the new owner is a slob. Best wishes with the new washer!

Crikey,
I hate when that happens. I want my 'premonitions' to be of good things and money and unexpected joys. Except lately a lot of joys seem unexpected when it relates to money. Hope you have fun picking out a new washer. Did you get something in a lovely color? It is kind of fun now that washing machines are not just plain white.

Love reading your blog - thanks for sharing

Ohhhhh shite. How old is this machine? I'm worried that I'm on borrowed time with mine (though it's not a Maytag Neptune..and you say those words "circuit board," which sounds NEW to me, like a computerized washer, which mine is most definitely NOT.)

i hate laundrymats... and while everyone makes fun of my 20 and 25 year (respectively) washer and dryer ($100 on craigslist, delivered), they have been very reliable. And when they are not, Dan's been able to fix them pretty quickly. My mom's telling me to hold onto them for dear life..... now I know why.

Only that it hurts to drive has kept me from going out to the local appliance guy to get a new washer. We're pretty desperate... it's a top load whirlpool, maybe 15-18 years old. Gave up felting things a couple years ago, and gave up spinning on the regular cycle a month or two ago. So I have to reset it to spin out on the perm press cycle... and the clothes aren't always especially spun. SO... Any recommends? I'm thinking a front load energy efficient machine. I want to use half as much water (which would cut the sewer bill in half as well).

Oh yeah, and it sounds like a jackhammer when it runs too...

I have a Maytag fridge that has caused me no end of grief (and before that, a Maytag dishwasher...fool me once, shame on you, fool me twice, shame on me)...and I now call Maytag...Maygag....