Friday This 'n That, and What do you think?
Welcome Spring

I just called my brother to tell him how happy I am that he's here. 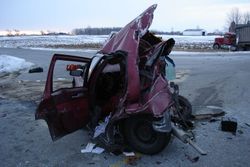 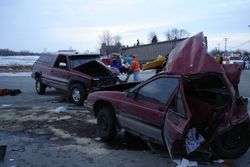 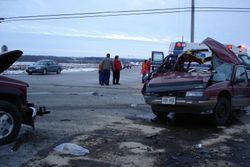 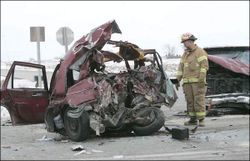 He's over 6 feet tall and was driving that "car," so you can see why we're happy that he's here.  Three years ago today, he was rear-ended by a semi-truck (visible in the background of the top two photos) while waiting to make a left-hand turn on his way to work; the semi pushed him into the path of an oncoming pickup truck.  He was conscious when they pulled him from the wreck for the helicopter ride to the hospital.  Emergency brain surgery soon followed, though, and it was quite a rollercoaster ride over the next several weeks for all of us!  I've never posted these pictures before -- the first three were taken by the helicopter pilot, I think, the fourth nabbed from the local paper.  (I should be flogged, but tell me you wouldn't have.)  I saw the helicopter on its way to the scene on my way to work that morning -- I always noticed them because my uncle was a flight nurse at the time (thankfully, on vacation that day).  I blogged many of the ups and downs over the following weeks; click "Michael" under Categories in the sidebar for the rest of the story. 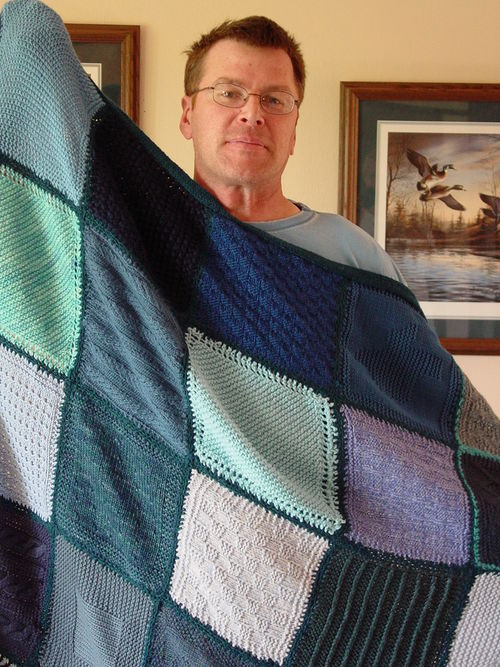 Forces rallied and the most awesome Christine gathered squares for blankets -- for both her brother and mine -- and sent it to me by Mother's Day that year.  Michael dubbed it the Knitblogger Blanket of Love, and it couldn't be more true -- every stitch infused with special healing powers to keep him warm and remind him how much he is loved.

And they all lived happily ever after.

I'm glad you still have your handsome brother in your life.

Holy Sh1t!!! (this is what I was thinking after seeing the pics and the post title). Yowza, yes, glad he's still here! YIKES.

I didn't discover you until well after the Michael crash so I didn't know the story. You are very, very lucky to have Michael. And I am very, very happy for both of you.

I am so happy your brother survived. xo

I remember that, 3 years ago! And I'm so glad to see the update--and the photo with that obviously well-loved blanket. Happy Michael Day, indeed!

Gosh.. I remember this one too.
I LOVE celebrate Michael day! It's about time we had some wonderful news in this world, and this is the kind that makes me melt into an absolute puddle of joy..
yipppeeee
happy day Michael. Happy day Vicki

Yay! I especially like the ending- the "happily ever after" bit. I remember that day, and wish your brother Michael the best year ever!

That was a horrible scary time for your family and I remember it well. I'm so happy that things turned out so much better than they could have. Love to you and Michael and your whole family, Vicki!

Seeing that "car" is stunning!! Oh my, it is a miracle and wonder that he is here. I see my square!!!

I started reading your blog around that time and remember how difficult it was not knowing how he was going to come through this. I am so happy that you still have your brother in your life.

Yikes - what a scary event. It's a wonder he made it through. I'm so glad he did. Love the blanket. Knitters are truly the best.

Happy Michael Day! I know you are glad to have him in your life--especially after seeing those photos. The blanket is beautiful.

Wow, was it really three years ago? That time seemed to go by in slooooooowwwww motion for us -- and I'm sure exponentially more for you who were actually living through it. I'm so glad everyone lived happily ever after.

That's incredibly scary. It must be hard for you to look at those pictures even now, this far on the safe side of all that tension and anxiety.

How well I remember that day! Happy Michael Day to you - and to Michael!!

I'm a little late commenting for Michael Day but I was thinking about him and you all weekend! I remember so clearly when it happened. It's so wonderful how well he's made it through.