There are so many things I love about this picture, not the least of which is my butt.  It won't ever look quite like that again -- the best it ever did -- but I am inspired nonetheless.  This photo was taken in September 1990.  I was pregnant with Maddy -- though may not have realized it yet.  It's "the old neighborhood."  I kind of laugh when I talk that way. I can't believe we've lived here for nearly 22 years. There have been so many changes!

Ali (carrying the balloon) and I are walking Katie to school on her first day of kindergarten.  Aw, little Ali wanted to go to school so badly, too!  Their grade school was only a five-block walk.  Loved that. They used to wear matching dresses a lot -- this one was a particular favorite.

The ginormous tree at the top left was a catalpa tree two doors down. My brother's kindergarten teacher (from another district and a long time before) lived there.  Her name was Helen.  She was in her 80s and had freckles and long (dyed) red hair that she put into braids and wound around her head, Swedish style -- she never wore it any other way.  Every once in a while, when I walked past her house in the summer, she'd be at her bedroom window upstairs, brushing out her hair, and we'd have a conversation.

Anyway, the driveway we're approaching was my next-door neighbors'. Actually, at the time, Marie lived next door -- and had for 80-some years (since she was 6).  A few years later, though, the people who bought it from her wanted to build a larger garage on the other side of the house and move the driveway.  They had three-going-on-four kids when they moved in and the house had a tiny one-car garage that was so small, the doors could only be open on one side of the car when it was inside.  Well, the catalpa tree was in the way.  After some negotiation, Helen agreed to let them take down the tree.  I never knew how much that old tree shaded my house 'til it was gone!  There are a few others in the neighborhood -- including some volunteers in my own yard -- but I still kind of miss it. 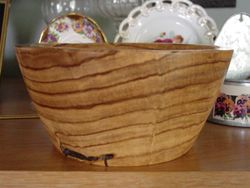 My neighbor knew that my dad turned wood, so gave me a chunk of the tree and asked if he'd make something for Helen.  The nature of that business is that the wood has to dry for quite some time before it can be worked and, unfortunately, Helen died before it was finished.

I have that catalpa-wood bowl and it's one of my true treasures.

So, the old photo is providing some inspiration and the impetus to get back to Springing Into Summer.  Having lost a little of my "spring" with the back strain, I'm back to about 99.9%.  I've not been so good at keeping up with the food journal, but it's always on my mind and... in fact, I'm going to start again RIGHT NOW!  I had a Koka Moka Pro Bar for breakfast -- Ali's carrying them at the coffee shop now and I am very happy about that. I also found PocketMod and it's SO EASY to make your own small journal -- for anything!  I have been good about keeping track of my weight (!) -- even during the back crisis when my weight SHOT UP as my body went into crisis mode and was holding on to every speck and every drop.  It's finally stabilizing now.  On Saturday, I'm heading back to Zumba!

Thank you for sharing the picture and all the stories associated with it. The bowl may not have been put into Helen's hands but I'll bet you still call it Helen's bowl.

What a fabulous picture (and bootylicious too!). I love the stories you tell about your special treasures.

I love when you write posts like this, Vicki.

Ditto what Carole said. But I noticed right away that you DID NOT have smoke in your hand as you walked to school!

Wonderful stories--thank you for sharing them with us.

Nice butt! Love the bowl, too.

Awww - I love that you have that picture.

I love that glimpse back in time with you and your kids. And I love that bowl and the story behind it!

The photo is just so wonderful; there is an easiness to the movement - it's beautiful. I love the bowl Vicki - the whorls and the colours are just stunning.

Oh what a sad story about the tree. Big trees are THE BEST thing about old neighborhoods. They just give such a sense of peace. I'm glad you have a piece of it left!