I've knit two very successful projects (IMHO -- I love them, anyway) in the Opal Hundertwasser sock yarn with which I am so enamored, but I believe I may have met my match.  I have tried a few different projects with the current color, Wartende Hauser ("Waiting Houses) -- what's not to love? there's a ton of orange and the "a" in Hauser is supposed to have an umlaut.  But oh!  NO!  I don't think this too often, but the phrase "clown barf" keeps coming to mind -- not a good thing when knitting ANYTHING!

So, time out for that project.

After a bit of a search, I finally relocated the instructions and charts for Addison's Christmas stocking, but there was neither yarn nor needles in the vicinity.  I've had at least two unsuccessful starts on that project already (a year ago) and thought I stuffed it all as a unit someplace to chill -- the name looking like complete crap because of my being challenged in the colorwork department.  Anyway, I couldn't find a project bag or even the correct colors in the box containing the Lamb's Pride stash (a very vague memory of using it for something else), and the LYS didn't have the right shades on the shelf, either, so I bought Cascade 220 instead -- his won't match Mack's stocking exactly.  But that's OK!  I say so.

I wound the yarn on Saturday, did some quick calculating last night, cast on at the start of (dvr'd) Grey's, and have nearly finished the name section.  Oh my.  Do I love Cascade 220, or what?  I like Lamb's Pride a lot, too, but even with my deficiencies in technique it's looking pretty darn great!!  I'm really glad to have this project underway.

Even though I knew the floor in Katie's apartment was going to be done yesterday, I was SHOCKED when I stopped by last night on my way home.  The entire floor is a lovely, light-colored terrazzo -- neglected for more than a decade, the worst part was a formerly carpeted room where the pad had been glued down.  How to remove the glue without ruining the floor?  I don't know what he ended up using -- it smelled a lot like Goo Gone -- not unpleasant, but... do they make that stuff in industrial strength?  Powerful!  The floor is absolutely GORGEOUS!!  It has a wonderful, warm sheen -- and she's started to pull furniture in off the porch.  The new cookware was all unpacked and on the kitchen counter.  So fun.

I stopped by the coffee shop last night, too.  Ali had a holiday "Tasting Event" -- new beverages and seasonal treats -- plus pre-ordering of gift baskets/boxes (yay, bunch of stuff crossed off my gift list!).  Mom was there with a group of friends -- some of them knitters -- and she was wearing her new Noro Entrelac Scarf. 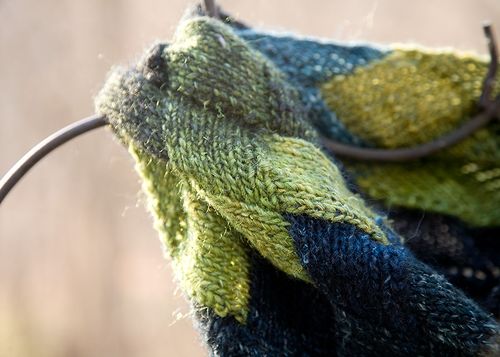 I'm sorry to show it again so soon -- I had no time for photos last night.  Everyone was amazed that there weren't any half-green/half-blue "squares" (or whatever).  Well, there are... and there aren't; the color changes are so very subtle (except when they're very abrubt)!!  I'd love to knit another of these, maybe in Silk Garden Lite.

I'm so glad it's Friday.  I had a hard time getting out of bed this morning.  DH is in Madison (MMoCA Holiday Art Fair at the Overture Center this weekend), so I had early morning dog-walking duty for the first time in a long time.  There was no country music serenade, nor cacaphony of barking -- we must have caught them all unawares.  Anyway, I'm looking forward to sleeping in a little bit tomorrow.  Happy Weekend!

That scarf is absolutely worth a second photo. Happy weekend to you, too!

I agree - beautiful colors in that scarf, for sure.

I love the green and blue together. Great colors.

That Noro is perfect for the Entrelac Scarf. Now I want to make one.

Your photographs are lovely.