Today's the day.  The short version (because I've got tons to do today!):  When we bought our house 22 years ago, it was split in two -- a lower unit with a bedroom (the old dining room) downstairs and a second bedroom at the top of the stairs, and a 2-bedroom upper unit.  We always knew that we'd one day open the door between the two (that's all there was to it!) and take over the whole house -- which we did about 17 years ago when we had three kids crammed into that bedroom at the top of the stairs.  We gained many rooms (including an upstairs kitchen) and have moved in and out, repainted and repurposed some of them many times over ever since.

Now, for various reasons -- like kids moving to their own apartments or going to college -- we are sort of splitting it in two again.  This time our "tenant" will be one of our own kids -- so I don't mind at all that they use my front door (we tore down the outside stairs long ago and put a shed in its place).

Here's where we're moving to -- DH's former studio, downstairs, on the south side of the house (part of the old wrap-around porch that we remodeled and enlarged shortly after moving here): 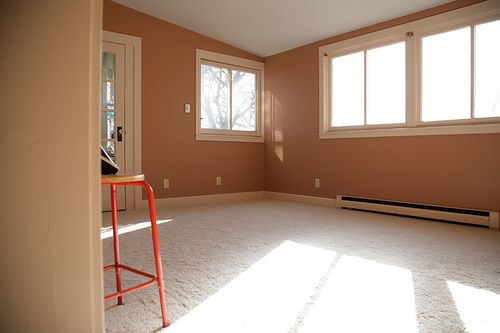 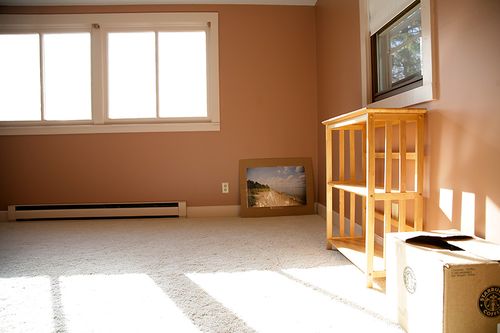 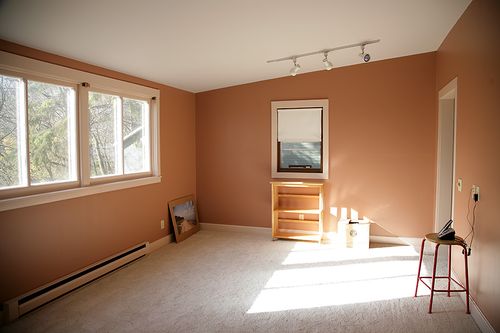 And with that, I guess I've decided...

I had considered NoBloPoMo (No Blog Posting Month -- just a play on "words," not an official movement that I'm aware of), but there's too much exciting stuff happening this month that I'm going to want to share.  Norma's right, I'd be lucky if I could last four days of not posting at all.

Give the Randomizer a spin now and then -- always interesting!!

There's a big game on TV this afternoon that I might want to watch, so I'd better get to work!!

So is that your new bedroom? I thought I was paying attention but I'll admit to being a bit confused now.

I'm confused, too. WHICH is the new bedroom? Old bedroom? I'm confuzzled.

BUT in shades of Vicki (but only JUST) I sort of cleaned my old office today -- the one I have not used in months and months -- maybe even years -- since I left the production of transcripts behind with my "new" career niche (which itself I think is now dying). It's pathetic that it's been in this state for so long, but I have had no use for the room. But now I need a quieter, more private place to study, and study HARD, for the next month, and I'm just not having any luck in any other part of the house. So I got the Christmas decorations out of the center of the floor (I kid you not -- it's almost time to dig them out again, IF I do) and vacuumed and dusted and organized somewhat, so that I can at least see myself think in here, and breathe in here without getting COPD or something (LOL). I actually quite like it. Who knew? Hahahaha.

oh, now I am inspired....perhaps a thorough clean out is JUST what my studio/office/guestroom needs!

So where are you booting the husband's art space?

Good luck with all the moving and adjusting! Not that I'm a big feng shui person but I wonder how all the changes will impact the energy of the house/family.