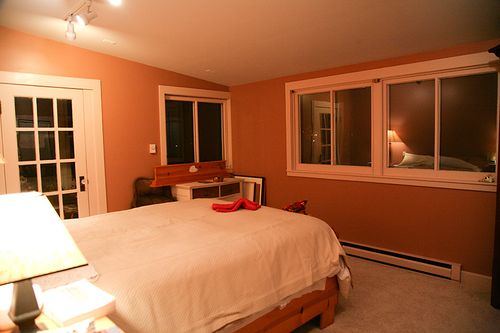 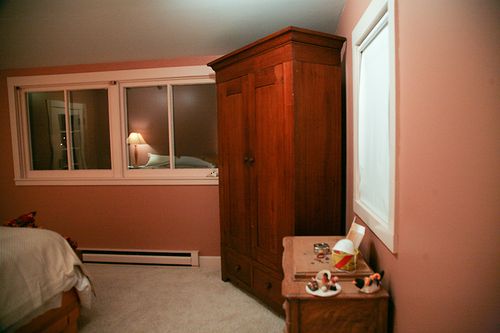 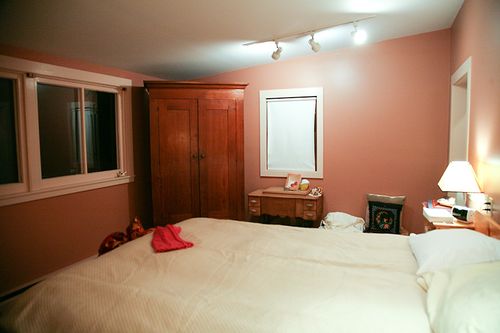 It was a lot of work.  There's still stuff in the old bedroom -- not really all that much, though -- and I have a few things to deal with.

The wardrobe went up a different way than it came down and it almost didn't survive, showing a few more scars now -- it was touch-and-go a couple times for Ali's BF, too!  Thank goodness for those two and all their help!

I've already determined that Grandma's sewing machine, which I've used as a nightstand for 17 years but is now too big, will need to go (somewhere else in my house, not "go" go) and my dresser will be moved over there.  We put the legs back on the bed (that DH and I made in May 1984, along with a pair of nightstands and a big bookcase), so it's too high to sit on to don socks (and that's not good for the mattress, anyway).  There's will be room for the chair.  This room is smaller and there's some funky stuff goin' on -- floor weirdness, door and window weirdness.  Makin' it work!

It's true, DH has been booted out of his "studio."  He has moved quite a bit of his workspace to an area in the front of the house that is part of the main living area, originally the parlor, offset and separate from the room known as "the living room."  He's also a member of a co-op gallery about 15 miles from home, where he has studio/gallery/storage/work space, and will likely be doing something art-wise in an area above the coffee shop.

Sorry for the confusion... there's been a lot of moving, painting, and rearranging going on in this family -- at home, at the coffee shop, at Katie's new apartment.  This is OUR new bedroom.  The old one (upstairs) underwent a documented While You Were Out transformation a few years ago -- and it will, once again, be part of the upstairs apartment.

Ch-ch-ch-changes.  Birdsong knows a little somethin' about changes and is having a contest to celebrate her birthday wherein she'd like to hear about yours -- the deadline has been extended to Friday, November 6th.  (A very big day.)

Oh man do I know about window and door weirdness in bedrooms (our dining room too)! Your new bedroom is looking fantastic though and I love the color!

So many, many changes in your life this year and it's wonderful to have you document and share them with us!

(catching up again on all your posts while the Mogrunt sleeps)