I was going to write about my weekend, as I do most Monday mornings, but if I don't write about Beth Kephart first, I'm afraid I won't ever -- in the flurry of amped-up springtime activity and vacation planning, it'll soon be old news.  Let me tell you, Beth Kephart is anything but old news.  I attended one of two intensive memoir-writing workshops she conducted last week during her quick visit to the Fox Valley for the 3rd annual Fox Cities Book Festival.  "Intensive" being the key word, it was a packed house and Beth squeezed more out of us during that hour-and-a-half than I'd ever have dreamed possible.  There was not one idle second.  It was absolutely fantastic, and also so much to take in and process.  I listened, I wrote, I read, I listened more, I tingled; when it was over, I was left only wanting more... and ruminating.  As with the intensive, day-long photography workshop I attended at the end of February, I end up ruminating long and hard over these things.

I've attended but a few of the many Book Festival events each year; I am so pleased with how it's grown and developed in only 3 years and continues to improve each year!  I can't wait to see what next April brings!

So, the weekend...  On Saturday I think I just did homebody stuff -- laundry on the line, computer backups, and that sort of thing.  Oh, yeah!  I did some dusting and even had The Princess out for some vacuumming.  There must have been something in the air, as the little neighbor girls (wearing veils and crowns!) were very busy in the playhouse, also doing some spring cleaning.  At one point, while one wielded the broom, sweeping down the interior, the rest all ran screaming out the front door, "It's a BEE!"  Heh.  I love that they like playing down there so much, and that "the little blue house" still gets used as intended.

Katie stopped by upon her return from a week-long business trip to Chicago, and it was fun to catch up with her.  She was able to get into the city a couple of times -- for blues and tapas (at different venues), and for museum-going (with added interest in the way of stalled car in rush-hour traffic!) (quickly resolved, thank goodness).  She stayed an extra day in order to visit Mies van der Roh's spectacular Farnsworth House, which she's written about here.

I did a bunch of different things on Sunday!  I went to an open house at Dawn Koehler Design with Kate -- found some fun, new earrings!  We found an open nursery and I bought a half-flat of pansies.  I needed to do something outdoors after that, so cleaned and replaced all the little plates that border the patio.  Dawn is coming over for a bit on Wednesday to take a look at our property and give me some ideas for gardening and landscaping, so I'm reluctant to do too much until we put our heads together.

I had more laundry on the line (fresh sheets!).  I wound yarn. 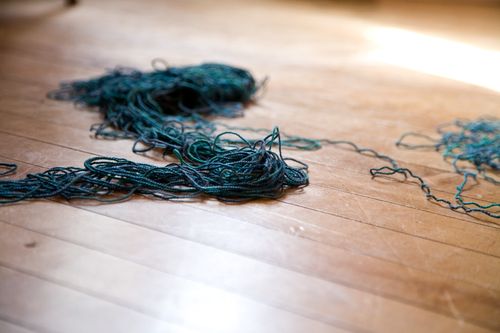 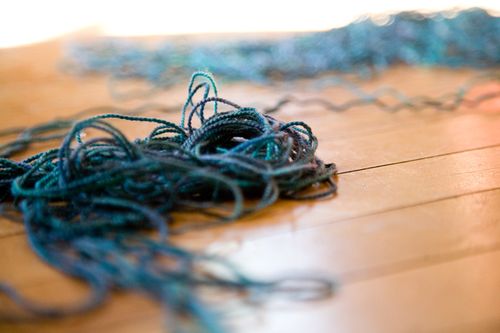 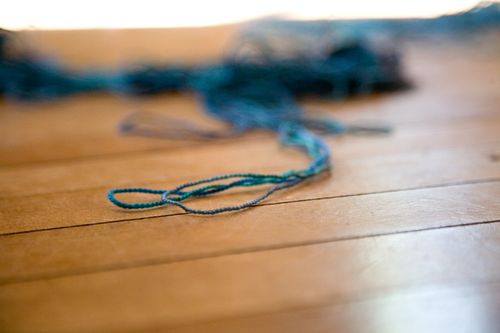 Ooops!  (I successfully detangled while catching up on recorded episodes of The Mentalist).

It turned out that all the kids were 'round the table last night to share the big pot of cioppino I made.  Oh, so yum.  We'll try to make that happen again next weekend, but with a few more people, to sing "Happy Birthday" and share some cake!

I think that's it!  I hope you had a great weekend, too.

Fresh sheets, cioppino, yarn (thank goodness it untangled eventually), and family around. You know how to live.
(I'm a little envious of Katie's blues and tapas trip to Chicago!)

Oh, what a divine weekend! I want to see the earrings. . .

It all sounds lovely!