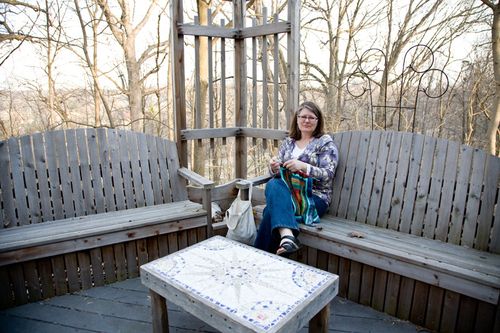 The weather was this nice yesterday -- this is after work, while the rice that we were having for dinner cooked on the stove.  Absolutely fantastic, record-breaking weather for April 1st -- and there's more of the same on tap for today.  Simply wonderful.

But I am not fooled.  Even while daffodils are blooming and willows are tinged green, I know that there's a very good chance we'll see April snow.

I'll take it, though.  I'm not complaining.  And, hey, come on over!  I look a little lonely.  There's room for a LOT more knitters!

I heard a Justin Bieber song on the radio for the first time this morning.  Apparently, he's got a #1 song on the radio.  I've seen him and heard OF him for months, but never actually HEARD him 'til now.  Took me right back to remembering my own little pre-teen crushes.  There was talk (on the radio) of Justin's appearance on some Chelsea show that I never heard of before, and I found THIS -- and now I must admit that I'm a little bit in like with them both!

My routine was interrupted this morning -- I don't even remember why -- but I took one look in the mirror at work this morning and realized that I never made it past mascara and into the blush.  Gah!

Things will be shutting down a bit early at work today and I'm going to take Mack to a movie!!  We're going to see How To Train Your Dragon.  (No G-rated movies at the theater during spring break???)