What's the meaning of this?
Wordless Wednesday

My plate runneth over.  How does that go... about a rolling stone gathering no moss?  My head is spinning a little, so this post is going to be part holiday weekend wrap-up (with knitting!), part looking ahead, part punch list, and part appointment calendar -- a skimmer's paradise!

It's been crazy-(mostly-fun)-busy here and things have been happening fast!  Well, some things -- one really big thing -- may appear to have happened fast -- and even felt like it happened fast -- but it's actually been bubbling and brewing for quite a long time.  And as much as I'd like to have avoided it F.O.R.E.V.E.R, there was no escaping that it just had to be done.

Bear with me... HERE'S WHAT'S BEEN HAPPENIN'

The Olds had good provenance and was, for the most part, a pretty good young person car.  It has been plagued for a while now by nuisance, intermittent, and potentially dangerous electrical problems -- the sort that are nearly impossible/expensive to trace/repair -- that have been making driving hazardous -- not just blinking dashboard lights, but complete loss of power and a tricky re-starting maneuver -- it was an accident and/or engine fire waiting to happen.

ENOUGH!!  I've been taking Sunday drives through car lots, hither and yon, for months.  On Tuesday, the stars aligned and I decided it was time to test drive the 2007 Nissan Altima that I've had my eye on.  It had good ZOOM-ZOOM!

Note:  Madeleine has requested that when I clean out the Saturn, I also remove the "I'd Rather Be Knitting" license plate holder because... get this... IT'S EMBARRASSING!!  Really??  Harumph. 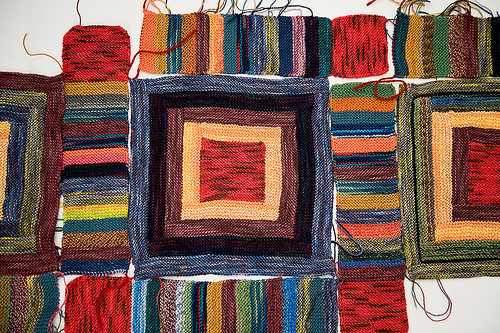 The strip knitting is going a lot faster than I thought it would -- it's so much fun!!  I'm needing to think about layout and how it's all going to come together now.  Still haven't woven in a single end; have been carrying Chibis full of needles with me, though, so I'll be ready when I feel the sudden urge.  Heh.

Props to Scheels on the shoes.  I have been needing new sandals for a long time.  I don't have a closet full of shoes -- never did and never will -- I have a pair of tennies, a pair of Birkies, a pair of thongs, a pair of Keen Mary Janes, some wool-lined Merrells for winter, an ancient pair of Eccos (also Mary Janes).  On average, I buy a new pair of shoes about once every 2-3 years.  So a few weeks ago, I stopped at the locally owned downtown shoe store that gets most of my business to find some sandals -- I had Keens on my mind, but I'd take anything that was reasonable (i.e., prolly not Finns) and comfortable.  It was the end of the day and my feet were a little swollen -- which they are/can be at pretty much any time these days (especially in summer), so it's sort of important to keep that in mind.  Most of what I tried was too tight and the salesman suggested that I come back when my feet were not swollen.

Hello????  A little or a lot, it's practically a permanent condition right now.

The saleswoman at Scheels didn't skip a beat, recommending a couple styles of Keens and a pair of Eccos.  The Eccos were cute -- and a neat convertible style -- but they made my ankles look like Great Aunt Verna's.  Not the look I'm after.  Yay KEENS, Venice style in Amaranth & Simply Taupe which goes surprisingly well with my carmine red bike.

Tomorrow, early, I'm heading south for two morning photo sessions -- also to drive the triathlon route (in the car) (later on the bike), then north again -- WAY north.  It works out that most of us will be able to break away for a few days at my uncle's cabin.  The new bike rack -- and the bike -- will get a good workout!  I can't wait!!  My rides have all been pretty residential and I'm anxious to hit the open road -- in the quiet and pine-y northwoods will be perfect.

On Sunday the 18th, I'm going on a field trip with Dawn Koehler and others to Conrad Art Glass & Gardens.  That is going to be utterly amazing.

On Thursday the 22nd, it'll be my first trip (hopefully, not the only trip) to the peninsula this year for the Door County Antique Show with Mom & Kate.

On Sunday the 25th, Katie and I will be riding in the 24th Annual Gourmet Bike Tour to benefit the Best Friends of Neenah-Menasha.  We'll be doing at least the 25-mile route, maybe longer.

Thankfully, other than a a couple of birthdays (Addison-3, Dad-75), August doesn't look too bad.  I'll continue to ride and train for the Waterloo Fit City Triathlon which takes place on Sunday, August 15th!  I'll be part of a relay TEAM with two other people, so need only worry about biking.

I continue to slowly and steadily pick up photography jobs -- which is great, because I still have a full-time job -- so I'll probably have a few more gigs between now and the Labor Day wedding that's on the books!  This is a hastily thrown together example featuring some of my favorite photos from my Las Vegas vacation, but an example of something new that I'll be offering to photography clients -- I'll be able to incorporate video, text, original music... it's so exciting!!

And thank you so much for reading.  The comment count is slowly climbing to the 16,000 mark... it's ALMOST there!  Prizes await!!

No wonder your feet are constantly swollen! You are on them all the time and at a pace that would make any of us tired as hell! There's so much in this post I could comment about 10 times (and maybe win prizes?!) lol
The blanket is wonderful! Wasn't "It Might Get Loud" marvelous?! A new car!...I'm envious and what's up with the license plate frame! It's not old fashioned to knit already, is it?
TGIF! Take time to put your feet up even if they are in darling new shoes!

Where do I start?! First, I love the knitting modules and the potential to knit a quilt... what great fun! I love the shoes too, and they certainly fit both your lifestyle and mine. I am envious about so many close-by places to bike to and from; something to be said for village life, with plenty of action. I think my 'village' is too hilly and suburban to ever qualify, and don't want to move to a really urbanized area, but miss that biking everywhere I used to do, back when I was pulling child #1 in a bike trailer, along with all the groceries. Sounds like you are having a wonderful summer.

Love the Keens. My whole family wears them. When a person is as busy as you are it's important to have good shoes for all that running.

Matching your shoes to your bike? Way to set fashion trends, ma'm!

Wow! You're a busy woman! :-) But busy with such wonderful things -- family, community, art, craft, fitness. Love the shoes; love the car; REALLY love the blanket; love that you're loving the bike. . . and . . . LOVE that video/photo collage. What a wonderful souvenir. Now. . . relax, will'ya?

Coming out of lurkdom to help you get to the magic number.

Ok...I am exhausted after reading that! Sounds like a fabulous week.

Wowsa, love the blanket! It's a good thing you wrote all this stuff down, how else can you keep it all straight?

My Keen sandals (Ormond) were in my blog post this week, too!

All I can say when I read your post is Wow, I thought I'd been busy!

Wow. (Seems to be a popular word upon reading this post.) Talk about busy AND productive!

I am loving the project....the colors and shapes are looking fantastic.

Off to work now, which suddenly doesn't look quite so crazy after reading about your last weekend and week....though I will be heading up to the Cities right after work, stopping to get her fitted for pointe shoes en route, and meeting daughter #2 off the bus from camp in the Twin Cities. Then a family reunion of sorts with eccentric great-aunts that I've essentially not met except at funerals.

But it's still not as busy as your last weekend!

Wow, you really have been crazy busy! Congrats on the new car. Love the Vegas slide show!

You go-girl! Can never have too many Keens. I stand in a kitchen all day in them. summer and winter.
Parsheesi is coming along nicely.

Yay Keen sandals! :) You've seen mine (ours); they are great for hiking (and biking and walking around). Congrats on signing up for one third of a triathlon! I really really really like the Hoover Dam sculpture photos, also those of the plants (flowers & cacti), and the old Vegas signs. Any plans on doing photography full-time?

Happy weekend! Hope it's cooling down a bit...

Love your knitting modules...great fun and portable for a gal on the go! You're the only other person I know who matches my crazy life ...fun and exhausting all at the same time! Can you ever imagine being b-o-r-e-d??!! Continue to squeeze every second out of life and enjoy the ride!

P.S. My computer has a near fatal virus and is out for major surgery...I'm temporarily using my husband's laptop...will write later!