I can't remember the last time I had a bike of my own!  (Does this helmet make my nose look big?  Heheheh.  Not my best angle!)  (And I'm gonna need to liven up that helmet... why did I not go red?)

I do remember my first bike.  It was a Raleigh -- blue -- and I walked around with a scab on my inside left ankle bone for as long as I had that bike because chain guard was too close to the pedal.  Sometimes I'd remember before there was bleeding, but I'd have to hold my foot in a funny (and unnatural) position on the pedal to avoid being nicked.  No fun.

I also remember taking a bad fall in loose gravel on that bike, and still have the scar on the first knuckle of my left-hand ring finger to show for it... that was back in 2nd grade!

At some point I got a big ol' Schwinn -- maybe a 3-speed, but I don't remember.  We were living in a new subdivision, in a fairly large area of new development, and I rode my bike the back way to a new friend's house two subs over.  I got stuck.  In mud.  I remember stopping to survey the situation and deciding that I'd be able to ride through; I was in the thick of it, of course, right in the middle, when I realized I couldn't.  Tires thick with mud, my shoes thick with mud, alone, scared, crying, muddy it might even have started to rain... did I mention the mud?  It was my first personal "Twilight Zone" episode.  I don't recall exactly how that story ended -- I'm willing to bet I powered and pushed my way through, determined not to die in a big mud puddle. 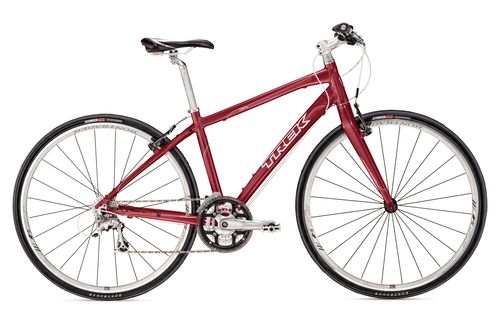 I picked up MY NEW BIKE after work yesterday.  I bought the Trek FX for a couple of reasons:

Maddy borrowed my car yesterday, so I had hers when I went to pick up MY NEW BIKE.  I realized on the way over that we paid more for my bike than we did for her car -- a fact that I mentioned to the young man helping me load it up.  He said, "Well, then you're just like most of the guys around here!  They all ride $6,000 bikes and drive $400 cars!"  Haha.  Yeah.  No.  I didn't pay anywhere even CLOSE to $6,000 for my bike.  GAWD!  I can't imagine spending $6,000 on a bike!!  I could buy a damn nice camera with that kind of money, though... and don't think I haven't already made the photog vs. cycling comparison!  I did buy the bike with photography in mind; while it's not a camera body or a lens, photography was a big motivator for buying the bike.

So, the maiden voyage was last night.  I rode 5.3 flat, paved, residential, non-photogenic miles.  My on-board computer reported that my top speed was 18mph, though I suspect that was a coasting downhill speed; I actually saw it hit 14 as I was actually pedalling.  I took my time and took it easy.  I feel it a little in my legs this morning, but in a most excellent way; however, my butt's going to want the padded bikewear moved right up to the top of the priority list!

My first bike was blue, too! AND I not only had regular scabs on my knees I took a bad fall in gravel and had to rub gravel out of my elbow for a week. Good luck with the new bike! It's fabulous. Oh, my boss paid $6,000 for his bike, but he rides up our canyons and competes, too.

I need to get out my bike. It needs a tuneup, but I should just DO it (and not wait for my husband to do it, which I have been doing for TWO years). It's a dark green Trek. Love it.

I love the red color you chose. Excellent choice!

My favorite bike I've ever owned was a Trek. I miss it terribly, but it was stolen almost immediately upon my arrival in CO :-( I hate the one I got to replace it and as such have only biked about 6 times in the ten years I've been here.

Enjoy your new companion and I look forward to the pictures that will result!

Yay, yay, yay!! Nothing like a nice lightweight bike to get you going. Yes, you need padded bike shorts. Once you start riding more than say 10 miles, you also may want chamois cream (I'm sure your daughter can fill you in, but if you want more info let me know - saddle sores aren't pretty). Got a late start this season with all the rain, but I'm up to 15 miles 3 times a week now. My Specialized is red too! You'll be glad you spent a little more and got a really comfortable bike.

Congratulations on your NEW BIKE! Have fun!!!!!

Vicki -
I have a red Trek, also. P-l-e-a-s-e run to your nearest shop and buy a padded bicycle seat (and padded riding shorts)! Your bottom will thank you forever! :)

My first date with my husband was a 25 mile bike ride along the Cape Cod coastline. I hadn't been on a bike for many, many years...I kissed the ground when we returned to the bike rental shop...and I didn't think my bottom would recover...ever!

Have fun and enjoy the ride! Happy fourth!

Regular riding will toughen up your butt :)

Congrats on the new bike! I'm laughing at kmkat's comment - but am thinking it's true and i should get on my own bike...

Congratulations! Ride it in good health! (And you have an on board computer on your bike?!? WOW!)

Have fun! I love your bike and I love your helmet, too (although I agree -- red is your color).

Congrats on the new bike. Red is a great choice. I think my first one may have been a Huffy with a banana seat. I can't remember the color (maybe orange) but I do know that I rode it everywhere.

Great bike! Congrats on lashing out and getting a good one :-)
I miss riding my bike - between chemo and the cold weather, I'm not up for even little rides to the shops now. But that should change later in the year.