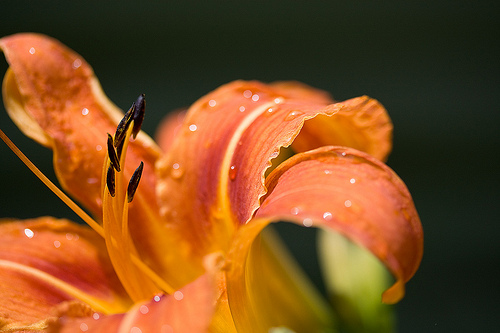 On Saturday afternoon, after Katie & Maddy finished work, we loaded our stuff into the car and attached three bikes on the back and hit the road to spend a few days up north.  DH had a class to teach at Peninsula School of Art in Door County, so couldn't join us, but Ali & Kevin were able to come up on Sunday night. 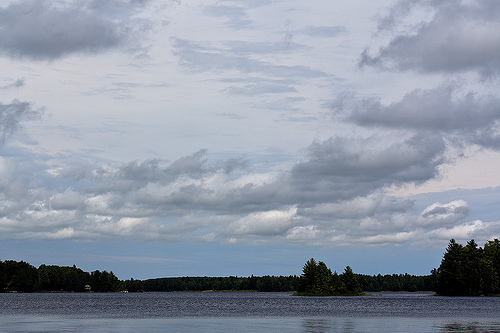 There were more than a few mosquitoes.  We arrived after dark and had to unload the bikes before unloading the trunk, which meant lots of in-and-out of the cabin, which led to letting in lots of mosquitoes, which led to lots of swatting all night long!  The first night was the worst; it got a lot better after that.

There was a little rain -- in fact, on Sunday morning, we didn't quite outrun an approaching storm and I was baptized on the bike, riding the last half-mile of a 15-mile ride in the rain! 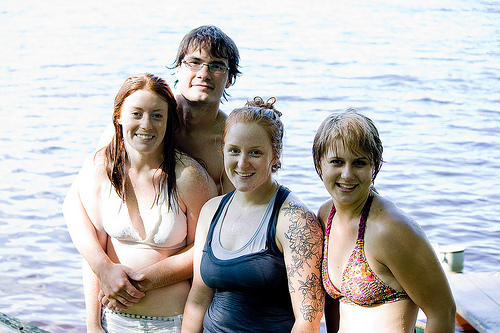 There was plenty of good weather, too; excellent for biking, canoeing, swimming, sleeping.  I had a most delightful nap on Sunday afternoon in front of the wide-open patio doors.  It's what we do when we're up north! 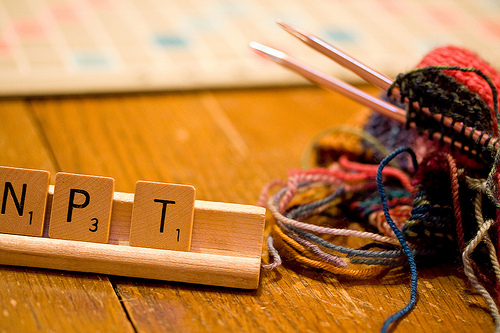 That... and this!  The kids asked, "Are you taking a picture because your letters spell 'YARN'?"  I was NOT, but I totally COULD HAVE!  I'm embarrassed to admit, on my own knitting blog, that it was there and I didn't even see it!  (What is wrong with me?)  Then, of course, I COULDN'T rearrange my letters to spell 'YARN' and take a photo because I'd give away four of the seven letters on my rack!

It's the Scrabble board from the big cabin -- the one that was always kept in the third drawer of the dresser in Grandma's room.  We all commented on the old, worn-soft paper bag that holds the letters -- with one big strip of masking tape where the seam had come apart... how many years... how many hands...

And cards -- the kids played various games of Solitaire, War, Crazy 8s, even Old Maid!  I didn't play cards.  I can knit and play a slow-paced game of Scrabble, but it's hard to knit while holding a hand of cards. 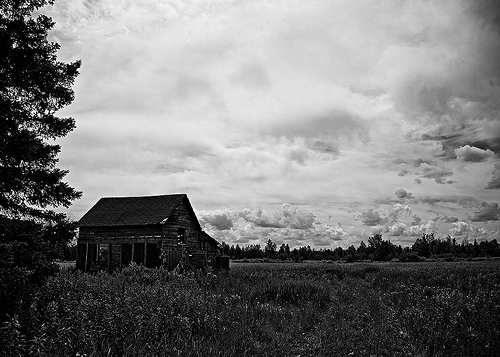 Always a big fan of ruin -- sentimental for what was, hopeful and optimistic for what could be again.  I aspire to, and am inspired by, some amazing local photographers who have this genre down pat: Dave Jackson's Simple + Dirty, El TiDY, Big City Al.  *sigh* 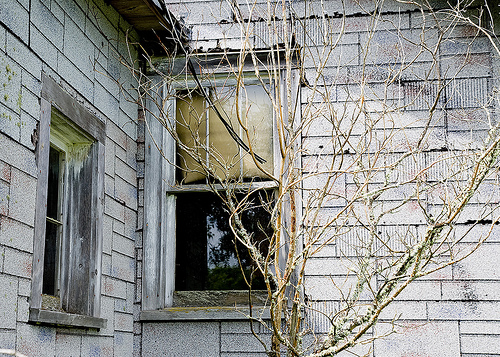 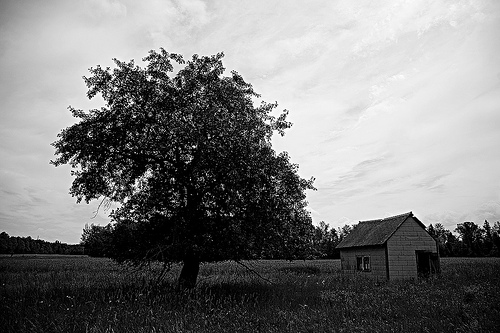 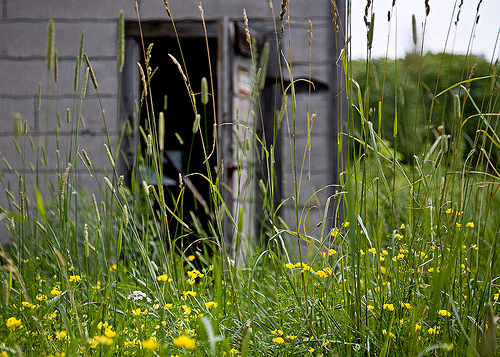 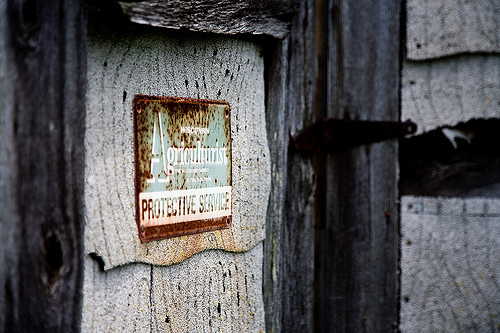 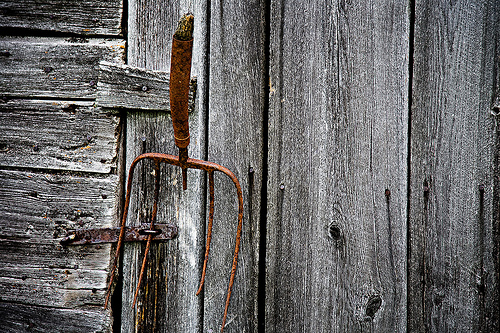 I love that it's necessary to use a broken pitchfork to secure the door of a shed with a caved-in roof.  I suppose the door was initially secured before the roof fell... but, with no prompting from me, even the kids were compelled to lock it up tight behind us. 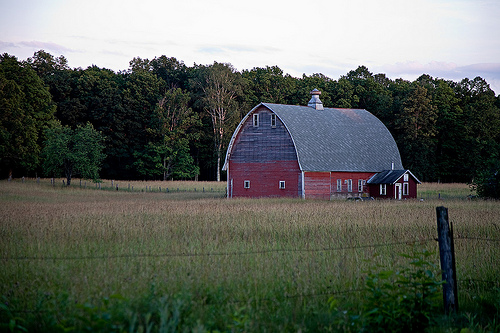 I hopped in the car on Monday as the light of the day faded to capture a favorite barn.  The sunset was nothing spectacular and the light was just sort of *meh* -- but it's still a favorite barn and there can hardly be a bad photo. 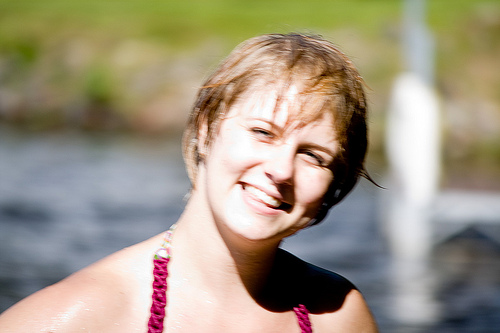 Speaking of bad photos... sometimes I take 'em... and sometimes the technical stuff just doesn't matter one bit!  It's the expression, emotion, feeling that speaks the loudest -- and such is the case with this photo of Maddy.  I just love it, but it's possible that that's only because I'm her mother!

Kate and I hauled the bikes to Butternut on Tuesday morning and rode 9.9 miles in that vicinity -- it was a little less hilly than Sunday's ride!  We packed everything back up on Tuesday afternoon and headed back home.  And it was back to work on Wednesday -- which totally messes up one's concept of a week.  This is the second of three-in-a-row 3-day work weeks for me; next week I'll have off the latter part and that might feel more "normal."  Heh.

We had RAIN!  There were flooded streets on the way home from work after late-day rain on Wednesday, something that I rarely see.  Alice Cooper's show in Oshkosh (which Ali & Kevin planned to see) was finally cancelled on Wednesday night and it's a good thing because boomers rolled through again around midnight.  Wow!  I much prefer day-time storms, thankyouverymuch!  I heard tell of a lot of flooded basements.  I saw water gushing from hard-working sump pumps on last night's bike ride.

Oh my gosh, can I talk about the bike for a sec?  It has occurred to me that this biking thing might seem to have come out of nowhere and... well, it pretty much has!  No one is more surprised than me that I've actually gone out, bought a bike, and am riding it.  A good bike is a substantial investment on it's own, but then the accoutrements take it to a whole 'nother level and I'm not even talking bells and whistles (just a figure of speech, a bell actually came standard) -- and all on a bit of a whim!  Inspired by my daughter's near-elation (I want some of that!) after some rides early this summer (after falling a bit out of love with it all, for various reasons, late LAST summer) and by my own falling in love a little with Wisconsin's Rustic Roads, it seemed like it might be a good marriage, if a bit polygamous, of travel + adventure + exploration + photography + fitness.  Lord knows, I've been unhappy and struggling with the fitness part of the equation for quite some time.

Less than half-way through my first "substantial" ride (nearly 15 miles) last week -- huffing and puffing, red-faced, sweating like a pig, barely able to a) keep up with Kate and b) catch my breath no matter how many times we stopped (I can't imagine if I still smoked!) -- I thought:

Well, the second half of the trip went MUCH better than the first!  I had to walk the bike up the last little hill to our house, but I hopped on and rode the last block home and felt such a sense of accomplishment -- 14.7 miles!

I've ridden about 80 miles in the past two weeks.  It's been... if not easier, then maybe less painful to spin those tires.  The second half of the ride is still way more fun than the first!  Katie wasn't up to riding last night, so I had my first 14-mile solo flight, which included some hills (about which I'd have said NO FRICKIN' WAY two weeks ago) and, other than stopping for a photo at my destination before turning back, the only stops were related to traffic.  It is absolutely fantastic and I'm so glad I jumped in feet-first -- and fast so I didn't have time to talk myself out of buying that bike (and accoutrements... most especially the padded shorts).

Whew!  Thanks for reading.  Happy Weekend!

It feels so good to find a fitness regime that works and how wonderful that you've found yours! It's even better (and maybe that's why it works) that you can marry it with your love of photography, travel, family and loads of other things you love. Go Vicki! (You know I love your pictures...each and every one.)

PS. Your photographs are as good or better than the links you supplied...just sayin'!!

That was a fabulous blog post! Oh those photos are wonderful. I love, love, love the one of the knitting and the Scrabble tiles. Two of my favorite things!! Any chance you could make some note cards up from it??? If you ever need a new member of your family...I'm volunteering!!

What a lovely weekend with your girls! And as always, I love your photos. My favorite is the brightly rusty pitchfork against the gray and weathered wood.

You had a fantastic weekish weekend, and I love your photos. I agree with kmkat: the pitchfork/door photo is my favorite. I think it deserves to be blown up, framed, and hung in your favorite, most comfortable room.

As to the biking: congratulations, and hang in there! Right now it's so hot to go on long bike rides, but wait for the first hint of autumn and riding the bike may become one of your favorite things to do. I don't want to sound pushy, so I'm going to switch from the 'you' to the 'I': I love to ride my bike, and I do it every day that it doesn't rain or snow (light rain won't keep me off my bike). I commute to work (40 min each way), bike on weekends, I even go on two-week bike vacations (through the NL, admittedly, where everyone rides bikes and, important when shlepping camping gear, it is completely flat). I'm glad to see that you're wearing a helmet; lots of drivers don't know how to behave safely near a bike and do crazy things, if they see us at all (I have a personal vendetta against young SUV drivers: based on day-to-day experience, some of them put bike riders in real serious danger). One thing I noted about your bike is the seat: are you comfortable on it? Trek FXs have stylish seats, but unless you are male or have a tiny bottom or have ridden for a long time or ride in races, there's no need not to upgrade to a more buttocks-friendly seat. I noticed a huge difference in bike comfort when switching to a less stylish but anatomically more appropriate seat. My bike riding experience also improved once I got a rear rack for bags and stuff and didn't have to carry everything in a backpack. A rack adds weight to the bike but, once again, unless you're into speed, you won't notice it much. Two glorious side-effects of biking: it shapes your legs nicely and keeps your lower back healthy. Yay biking!

Nuff said! I'm sorry for this lengthy comment. I look forward to many more photos taken on the road! :)

Wow, you have been busy! Your time up north sounds so idyllic.

I think the bike thing was in your plans all along. . . you just didn't quite know it! My theory is that sometimes our brains work things out for us while we're busy with other things. And when that happens, it's usually Really Right. Like your bike! :-)

(And that photo of Maddy? Wow! I think you must have totally captured her personality there. It's wonderful.)

hang in there with the bike - it is such a good thing that you are doing.
and your photos..... fabulous!
Looks like a perfect time with your girls !

The trip sounds great. The older my girls get the more I enjoy hanging out with them. I understand exactly what you mean about the bike. I haven't given up on mine yet. I'm postponing getting serious though. I decided to work out a bit on stationary bokes at the gym first to build my stamina (for those darn hills) and then I can really go for it.