One of the many reasons we ended up at a B&B in West Kilbride is because the village is believed to have been named after Saint Brigid. 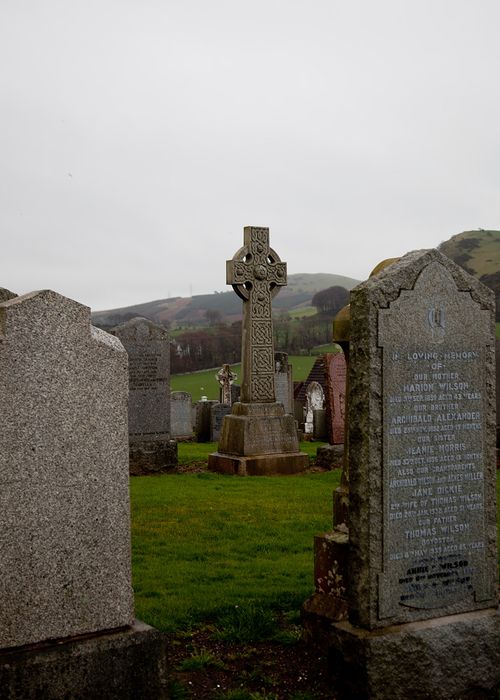 Alison bore witness to some of my last-minute packing, in particular the decision to pack my St. Brigid sweater, despite its bulk and the taking up of MUCH precious luggage space. (Have I mentioned that I've learned valuable, indelible lessons about packing for an overseas trip?) I justified it, in part, because it did provide some nice padding for the laptop in my carry-on bag. 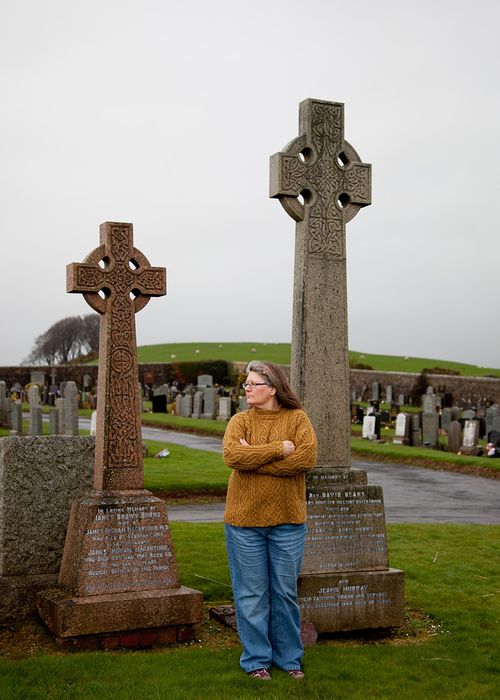 There was no way we were leaving town without a visit to the beautiful hillside cemetery in West Kilbride and a photo shoot. A far cry from what I pictured in my head (for one thing, I don't think I was wearing 7-day-old jeans in my head), it is what it is... me wearing my St. Brigid sweater and standing by a Celtic cross headstone in a Scottish cemetery in West Kilbride, Scotland! 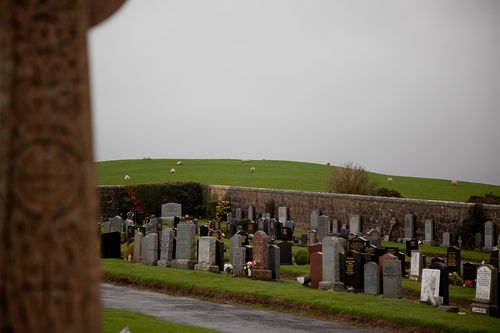 And, yep, sheep -- you can see them in the photos both above and below... little white specs! 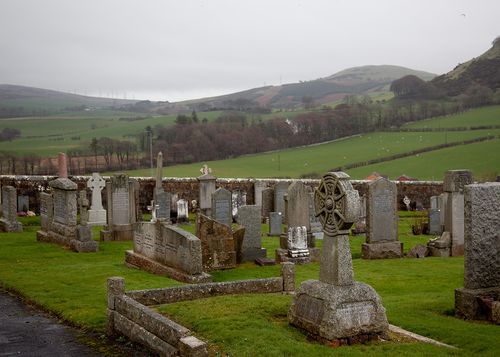 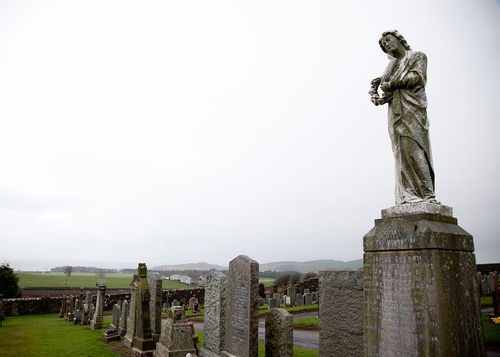 I will need to go back someday.

We left there on Friday morning after breakfast. We needed to drive down and pick up Maddy at the train station in Conwy, Wales, by 6:30 that evening. 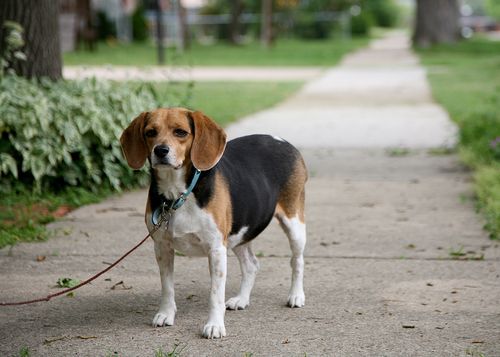 I'd had to tell Maddy the night before that her precious pup, Mickey, had died. Mickey had escaped the house a couple of days earlier, as sometimes happened in the 7 years she's been in our family, and, no doubt, she followed her nose, as beagles do... and she always did. We'd been much more diligent and this little trick was becoming rare. Usually she'd come back fat and happy; sometimes she'd have a little tummy ache; this time, she must have found something really, really bad. My heart aches for Maddy, and the house is just not the same without Mickey!

When Addy found out about Mickey, he said that she's with Remy, Bompa, and Sharon! Remy was Annie's dog that Addison never even met and Bompa was his grandpa who died when he wasn't even 18 months old! That sweet little boy with a wise old soul... he just feels things and tells it like it is!

RIP, Mickey. We miss you. XO

Of COURSE you had to bring your St. Brigid along -- the trip would have been a complete fail without it ;-) That photo should adorn the pattern!

Lovely post, Vickie. My sister's beagle was the same--bolted the door at every opportunity and ate like it was her last meal. So sorry about Mickey.

Fabulous photos and I am so glad you enjoyed your trip but am so sorry for the loss of Mickey :'(

So sorry about your pup-such a heartbreak when we lose our animal family members :(
The photos are lovely, 'tho

Breathtaking, Vicki! A perfect backdrop for your perfect St. Brigid. So glad you were able to fit it in.

I am so sorry about your dear Mickey.

So sorry to hear about Mickey. It's always so hard to say goodbye.

I am loving your pictures and following along vicariously on your trip ... and of course you brought St. Brigid!

Stunning sweater, even more so in that setting. All the pictures of your trip have been wonderful; so glad it was a good trip! But sorry to hear about your dog. The bitter and the sweet are always closely linked.

You. In Scotland. In St. Brigid. Nothing but fabulous.
RIP Mickey. It will be tough for Maddy to come home and not find him there. Big Hugs to you all.

So glad you packed St. Brigid so you could share that amazing picture! All of your photos are wonderful, and that one is really special, 7-day-old jeans or not!

Am enjoying your pics immensely...Your sweater is beautiful.

Its ther perfect photo shoot! Maybe it will even be a twice-in-a-lifetime one. Sad news about your pup, though.