Ten on Tuesday Thursday! I am no authority, but even I know that it is a big day for Harry Potter fans! I can't let this one pass because, while I've been reading all sorts of lists of awesome things, I can't believe no one (that I've seen) has mentioned Weasley Sweaters or booger-flavored jelly beans. I've never actually read an HP book, and have only seen maybe two of the movies, so maybe my interpretation of...

10 Awesome Things About the Harry Potter Books. Or movies.

...is less literal than some, and more influenced by cultural/commercial interpretations. Heh. No less valid, from my seat. In no particular order:

1. Weasley Sweaters! The Original Harry Potter Sweater! I sent away for The Original kit and knit this modification ("M" for Mack) when he was wee. One of his big brothers was a HUGE fan of Harry Potter, and now Mack is, too! 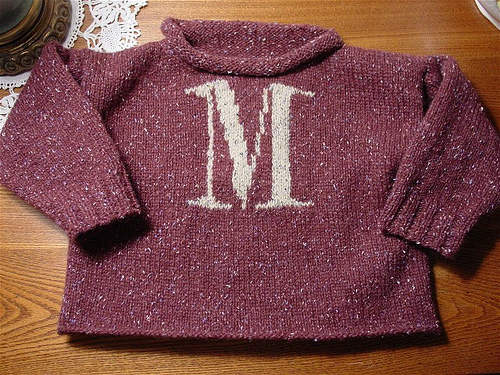 2. Jelly Belly Bertie Bott's Every Flavour Beans. These have been in nearly every Christmas stocking and Easter basket I've had to fill since they were invented because they tickle my funny bone.

3. Reading. I can't believe how many times my kids have read some of these books... and how often they had to be at the book store at midnight!

5. The Invisibility Cloak and Many Other Magic Things.

Haha. I'm going to have to read at least one, aren't I? At least two of my kids are going to be at the theater tonight for the midnight show!

heh. i'm taking my students to the midnight show. :o)

I did mention the sweet shop, although I didn't mention the jelly beans specifically. And yes, on the sweaters!

Oh yes, the Weasley sweaters! I read all but the last book, but we hope to catch up with the movies on DVD over the next month or so.

I have read all 7 books at least 3 times each, and a couple of them more than that. They are total escapist reading, perfect for vacation, or on a plane; they really suck you right in.
I say start reading!

I did think sweaters. . . but it just didn't make my list (for some reason). I only wish there was a pattern for a (fully functional) Invisibility Cloak! :-)

I've read them all, and they are definitely worth a spin...I've got two heading to the theater as well.

A wonderful way to "read" the books is to listen to the Jim Dale recorded books. And you can knit while you read! Or drive, or lie on the beach, or any number of things. Try it, you'll like it! P.s. to Carole--I can't believe no one has mentioned this yet, or am I the only one who enjoys what feels like a guilty pleasure? (Isuspect my mother did not read enough to me when I was a wee thing.)

That sweater looks more like that movie sweaters than the pattern that I have, the recalled Rowan pattern. My little one wore his until it was way too small for him and has requested a new one, though he wants me to change the letter on the front.

I agree with your comments about the casting choices. I think they did a wonderful job and I've been so happy to see so many of my favorite actors showing up in the series.

I do think you should read the first one, at least! :D I've read them all, listened to the first 4 or 5, and seen the first few movies. I guess I've fallen down on the additional media. heh. I love your sweater for Mack.

I could use an Invisibility Cloak...for many reasons.

I'm going tonight for a 12:30 show to take my 16 yo and her best friend. Crazy I know, but I read the books before the kiddo.

Please, read one. The writing, while not always technically perfect is rich and evocative. Start with the first book - the smallest. Then, when you are hooked you can read the rest in order.

What do you mean you haven't read even one???
I still want a Weasley sweater for myself. Am I too old for one?