Ten on Friday: Ten To Do
Ten on Tuesday: Consumerism

I loaded up my bike on Saturday and drove down to participate in "The Amazing Race" during Waterloo's Wiener & Kraut Festival.

I was having a little trouble with the front wheel of my bike. If it's just me, I usually try to wiggle the bike in the trunk of my car with the back seats down (I really miss having a wagon) -- it's tricky, but with patience it'll fit in one piece. My BIL was helping me after the triathlon last month and the next thing you know, I was taking off the front wheel -- which is easy-peasy, and it fits so much better, but I've just never done it. When I went to put it back on, it was loose. The "Clix" mechanism wasn't clicking. I stopped by the bike shop on Friday and they showed me what to do -- also easy-peasy but not working for me.

Luckily, Waterloo is TREK HQ! Also, in addition to all the wiener activities, it's also city-wide rummage sale day and there are people everywhere! I struggled for about 3 minutes and then someone who works at Trek stopped by and... voila! Back in business. 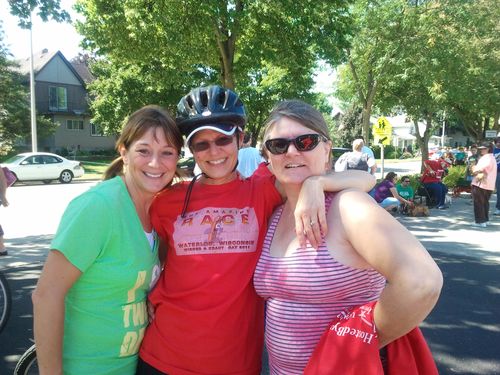 Our team (called "N/A" this year because Annie forgot to fill in that line on the registration form): Ann in the middle and me on the right; Carrie, left, was on a competing team but used to watch Addison when he was little(r) so she's okay. Heheheh. This year, the racers brought up the rear of the "Wieners On Parade" procession before collecting maps and "passports" and taking off! 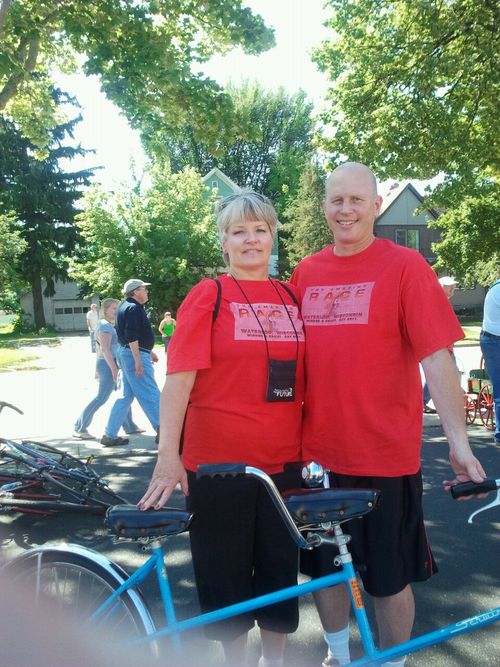 Karen and her husband were the only team on a tandem bike! They came in 6th place, Annie and I in 8th. It was a fun race -- no swimming this year, thankfully, and more bar games than last year! Also new this year: riding my bike through a few cow barns (they gave us curious looks but didn't seem ruffled), shopping at the Piggly Wiggly, manning a fire hose (SO FUN!), and injury. I can't even tell you when or how it happened, but it looks like my pedal met my shin... hard!

On Sunday, I drove over to Jefferson and met my cousin Rae and her husband at the Wisconsin Sheep & Wool Festival. Thankfully, I arrived a little bit before them and took advantage by rolling down my windows and napping a bit while listening to a nearby small flock of sheep. 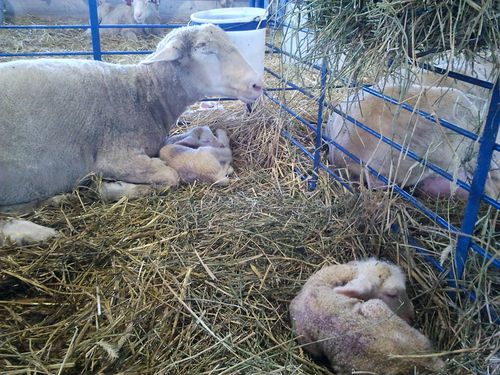 I went in a different direction and saw different things than last year... like lambs. There were 6 or 8 very tiny newborns -- one pair only a day old. We looked at some of the judged articles and fleeces, a quilt and rug hooking display, sampled some delicious cheese, and then finally made it to the vendor barns. I made it all the way through the first barn, but only half-way through the second before the whistle blew. Thankfully, Yellow Dog's Dixie spotted me and called out just as everyone started packing up in earnest. I haven't seen her in so long. It was good to hug her and we had a nice chat.

And, because of Dixie's sample, I cast on the third striped shawl but it has Different Lines!

Look at that! I believe this is the first video I've ever uploaded!

What a perfect weekend! (Hope your shin is okay. Ouch.)

You had a busy weekend! All fun, though!

Sounds like a VERY fun time was had by all. And now you need a little time off from the weekend. :)

Well done all around!! You know how to pack in the fun on a weekend. No wonder you need a rest!

Some year I will actually make it to WI Sheep & Wool. Just not this year.