I had such a great and productive weekend and, for that, I believe I can thank everything about the previous weekend!

First though, I have to tell you about this shawl. The first real lace project I've finished in a long, long time, I was spurred and encouraged by Kirsten's Through The Loops Summer Shawl KAL on Ravelry. Cerasifera turned out to be the perfect project for some Sundara sock yarn that had been marinating in the stash. It was a very enjoyable knit -- a bit challenging but not at all frustrating -- and fairly quick! I've had occasion to wrap it 'round my neck a few times so far this fall and, I do believe, this shawl is soon going to reach most-complimented-on-the-street status. I wear knits a lot and I am often complimented and/or asked about them -- by other knitters. This shawl is getting all the attention from people on the street (at the store, farmers' market)! It's pretty cool. Frosting on the cake: I won a prize in the KAL! My lovely hank of Good Girl "Crush" arrived from Stacy at Tempted Yarns yesterday, and it's quite lovely.

This has nothing to do with the weekend, either, but I love it so! Not really much of a pink person, this color ("Virginia" after my grandmother) just sort of grabbed me. I sort of did my usual careful mixing and measuring when dyeing the original (seen here knit up in Different Lines), and then also did my usual "let's see what happens when I..." add a dash of this and a few more dashes of that! 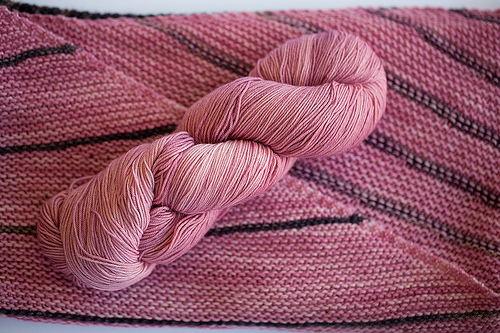 I wanted to see if I could replicate it and found a little time just before leaving for Utah. While I've used a different base for the new batch, I think I've done it -- or slightly improved on it. What do you think? I think it would look FANTASTIC with my winter coat!

There was roasting (and freezing) of pie pumpkin, pumpkin seeds, and spaghetti squash. The kids were all available, so I had them over for spaghetti and spaghetti squash (with roasted tomato sauce, of course) on Saturday night. I also had green tomatoes from the CSA, so I fried some up for the first time ever! They were pretty good, though I think the use of bacon grease rather than regular vegetable oil would probably make them better; they sure couldn't be any easier to make. 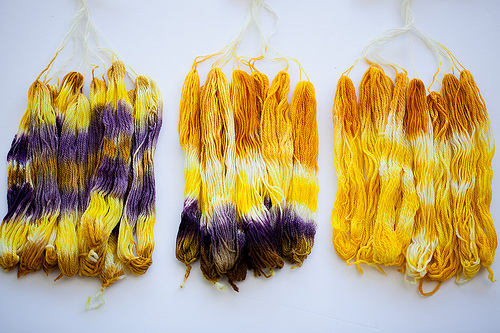 I also fired up the dye pot on Saturday afternoon -- catching up on my September:Yellow. I was feeling rather Mellow Yellow in the morning, but there is really nothing much mellow about this.

This was my first try and I like it the least. It's mostly knitted up into squares already for my PS Square Project and I might like it slightly better... but it may take another dip.

This is the second try and I like it a bit better, but I don't love it.

This was the third and last try. I sort of had a vision, but it was neither very clear nor thought-out when I began... I wasn't really going for Sunshine & Happiness, but here it is and... how can you not like Sunshine & Happiness??? This sort of even makes my liver smile.

I'd finished the knitting on the little Monster Bum pants that I've been working on (not yet photographed at any stage!), so I wove in all the ends on Saturday night while watching the Wisconsin Badgers march to victory. (What a fun game!)

On Sunday, sort of on a whim, I decided to go out and harvest some black walnuts from the back yard. I'm pretty sure that you'd find mention of harvesting black walnuts in a September/October post every year that I've been blogging -- if you know me in person, I've probably also talked about it every one of the 24 years we've lived in this house -- and I may have even gathered a bucketful once or twice; in reality, I've never actually harvested or done anything at all with the black walnuts.

I picked up enough walnuts to fill a 5-gallon bucket (the backs of my thighs still remind me) and then proceeded to hull about half of them. That is not fun work.  Sometimes surprises in the form of infestation of itty-bitty worms are found, and I recall that being grounds for abandonment of a previous effort... some years ago. I spread most of the hulls and all of the nuts to dry on a screen in the basement.

I took some of the fresh hulls and brewed up a pot o' dye. Dyeing with walnuts is actually no small task. After the pot is brought to a simmer, it brews for an hour, simmers for an hour, and then it's strained. After the wool is added, it simmers for at least another hour and then cools down (time varies) (I had a big pot and lots o' brew, so it took a few hours). Thankfully, it's one of those background processes. 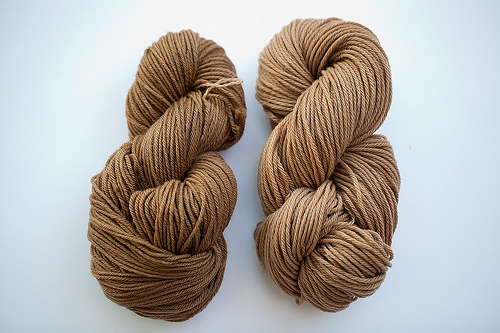 That's BFL Superwash on the left, 100% Merino on the right; both were added to and lifted from the pot at the same time.

A cowl in either will also look fantastic with my winter coat!

The Packer game was a late one, and I made use of my butt time by knitting the eyes and teeth for the Monster Bum and sewing them on. Still no photos. I showed the mama this morning, though, and there was swooning. I need to sew a bit of elastic at the waist to call it done.

OK. That's it for now. Mohair, Mystery Shawl KAL, and Monster Bum photos up next...

Wow! Like i said, you do so much more in two days than I do all week! I love, love the pink yarn and I found the perfect yarn to go with it. Now it's down to which pattern will show it off the best. Both your dye projects are amazing! Truly, to get that much color from walnuts is fabulous. Your adventurous spirit shows through in all your projects, including Monster Pants!

You did LOTS this weekend! I love your new shawl and the dyeing projects, especially the black walnut ones. I have 3 black walnut trees in the backyard but I've always avoided trying to hull those little suckers.

Your dye projects are lovely. I bought a bunch of Cascade Heritage sock yarn in "Walnut" because I adored the color and wanted to make a shawl with it, but alas, I don't think I'll like the texture of it knit up in a shawl. It's quite hard. I'll have to figure out something else... or make an awful lot of socks.

I love the walnut dye. I once tried to make hair dye with walnut hulls but it didn't work!

geezlouiz, you've been busy! I think it's hilarious that it made your liver happy... the third is my favorite too. I like the second also, but not as much (not so much a purple person, and like tone on tone better)... will be curious to see how these knit up! And the monster bum pants! Photos!!! Did you hull those walnuts because you wanted the nuts? years and years ago I dyed a bunch of wool w/ walnuts, just tossed it all in a pot and boiled like mad. Now I live in a place where they are uncommon.

Wow, you were busy! Love the walnut dye---the yarn looks like a beautiful cafe au lait.

Any tips on hulling? My neighbor will let me harvest her black walnuts, and I'm considering it. Otherwise, my son will do it and use them for improvised baseballs to hit down our street... Don't worry, the squirrels still get them in the end! ; )

Wow! Now THAT's an action-packed weekend! :-) I'm so inspired by all your dye-ing. I've really enjoyed your experiments with The Spectrum. That is such a lovely shade of brown -- not to mention the pink! And the yellows!

Your shawl is just so beautiful.... I love the colors you put together!

Awesome dyeing. Not sure which I love the most; all are lovely. Dyeing with walnut hulls makes me think of Robin Hood -- he dyed his skin with walnut hulls to disguise himself when he entered the archery contest (and won, of course).

Love the pink - so very much. Also? Those are some really Vikings-ish colors you have going.

OOoh - I love the dyeing sessions - and the photos are fantastic. Brilliant colors.