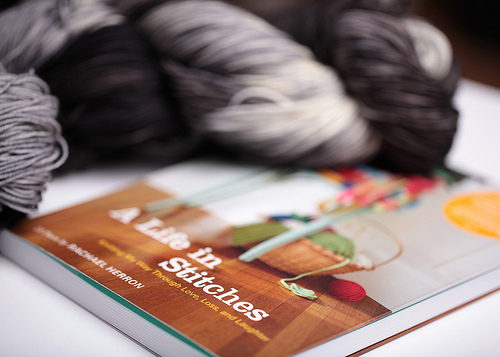 I'll probably finish this tonight -- A Life in Stitches

by Rachael Herron. I've enjoyed it so much I don't want it to end! It's pretty cool, too, because I've actually met Rachael -- and Lala and Janine and Celia -- all mentioned in the book. I met them all at once, even, last year while I was visiting at Celia's house! Anyway, it's a very enjoyable read and would make a nice knitterly gift, if you or someone you know are looking for such a thing.

I made more colorful yarn today. Well, actually, two hanks that aren't very colorful, but that make me very happy. They are definitely more "Gray Day" than "Dark & Stormy Night," and that's what I was after. I also made an incredibly deep red... mostly garnet with some ruby tones.

Speaking of Red, WAY TO GO BADGERS! The Wisconsin Badgers are headed to the Rose Bowl!! Hoping for a win for the Packers tomorrow, too.

I'm an Oregon Duck, so we'll have a lovely little rivalry! We have our fair share of Gray Days here, too!

I've been meaning to read that book. Thanks for the reminder and recommendation.

How fun to read about people you've actual met! Your gray day is beautiful with it's mutual undertones. I'd love to see a REAL ruby red yarn! It's hard to get the real, right red.

I loved all of Rachel's books. That one in particular was so personal it was an amazing journey thru her life experiences. Since the Buckeyes did so badly this year I will root for Wisconsin in the Rose Bowl- go Big Ten!

Speaking as a Badger: let's see the Red!

This is the time of year when I always feel so out of things (not being a football fan of any type or stripe). So. . . congratulations to my Wisconsin neighbors! :-) (And thanks for the book tip!)