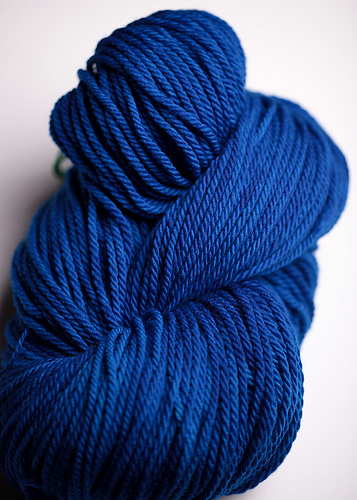 This is 250 yards of bulky-weight Merino I wound off for Kate to dye on Sunday afternoon. I have actually not yet worn my 5th Ave Cowl (Margaux's great pattern!) because Katie stole it and has been holding it hostage 'til she could dye yarn and make her own. Cobalt blue was the goal and, damn, I think she nailed it! She nailed it so hard that, depending on lighting conditions, it sometimes makes your eyes hurt. It's like continuous sun shining through cobalt glassware. She's been knitting in the evening, knitting during her lunch hour, knitting last night with the 1st & 3rd Thursday group at KC&T. We'll probably pull the shades down a bit and over-dye the finished cowl.

Speaking of knitting out, we sure had a great group last night! I thought it might be on the light side in terms of attendance, so just set up at a couple of tables near the front door instead of the usual, more spacious area upstairs. Katie came and knit for a bit, then my friend Ann from Appleton met her friend Patti from Green Bay (KC&T is right in the middle!), another Kate, then Pat and Bonnie from points southeast. Ali was working, but also knitting when she had time!

Ali's been working on Mason-Dixon dishcloths. She borrowed my book

, I gave her my bagful of cotton, and she's made several Ballband cloths. I get a secret little thrill every time I can answer a question, teach, or show a technique to one of my girls -- all three have been earnestly knitting! I have to admit that it's even more thrilling when I find out that they've been fending for and figuring things out themselves. Unbeknownst to me, and on her own initiative, Ali has also tackled the more complicated Mason-Dixon Washcloth. She told me that she even bought her own "double-points," which I realized later were actually circs (but, hey, no matter how you look at it, there are only two points on a circular needle) -- and which she also later realized when the pattern actually called for double-points. She came to ask me about decreases -- and to show me. "This is how I have been doing it, but it looks different; how would you do it?" And then I get to demonstrate the various ways and whys of doing the very same thing.

You wanna know one of my proudest Knit Mum moments (besides the time Katie knit Thrummed Mittens)? It was just after I'd helped Katie join her knitting in the round, being careful not to twist. We were all knitting together in the living room while catching up with Inspector Lewis (and Sergeant Hathaway). Ali came over to show me her Washcloth and said, "I'm not going to be able to fix that, am I?" And, of course, I had to say, "Nope." There was that bit ol' knot that comes from twisting the join. It barely fazed her. She tore it all out, cast on again (with a different color, for variety) -- being careful not to twist -- and exclaimed, "I'm learning SO MUCH from just this one little project!"

So, anyway, Knit Night(s)! I was happy to hear Patti's comment about how easy and convenient it was to get to KC&T. She admitted that it was the first time she's ever actually been in our oft-overlooked little bedroom burg... I hope she comes again. Bring friends!

I know "the other" Kate, Pat and Bonnie through my husband and Main Street Art Works, where Pat and Bonnie still work. I've been there before! Pat is a fiber artist and has done everything imaginable with wool except for knitting -- until now! She's raised sheep, processed their fleeces, dyed and spun the wool, felts and weaves, and makes the most amazing things -- vessels, clothing, accessories, hangings, assemblage! I saw some of her clothing recently at Hidden Valley Farm & Woolen Mill's holiday open house -- just gorgeous!

Pat almost brought her wheel -- I know she will another time, which would be great! My blinders are slipping a little in terms of spinning. Katie wants to learn... and it would be fun to learn something together... and it would be a good thing to know. Wouldn't it? Just to know the basics and fundamentals? I don't want to fall down the rabbit hole, but I've seen it happen A LOT. I'm afraid I'll be as successful a casual spinner as I was a casual smoker... which means that I should sign up for Spinners Anonymous right now! Ha.

There's a casual work party tonight. I don't want to stay out too late, though, because there's much I'd like to do on the weekend!

Ooh, I also love to knit to Lewis! (but mostly Hathaway ;) ) That made me smile. I grew up with Morse.

I dream of the day when Hannah and I will knit together! You spinning? yay!!

1. Love the cobalt - it is so clear and luminous. Love it.
2. Spinning - a black hole that you willingly stay in. Just sayin'...
3. Some first or third Thursday I am driving up there, just to be there...

Hell will freeze over before Erin picks up knitting needles! (Although I did teach Brian to knit several years ago.) Love that cobalt blue!

Spinning is something you should investigate and doing so with Kate would make it more interesting. Wheel spinning and spindle spinning are very different (if you ask me), but if you're curious why not check it out. Cobalt blue is such an amazing color. Kate did nail it!

Love that blue--so intense and gorgeous! My Becca knows how to knit but doesn't. Says she can't sit still long enough. I'm thinking it may just take some time with that one.

Cobalt is sooo mesmerizing -- love that yarn! I wish we lived closer so I could join your kc&t knitting group.