Have I mentioned...
Wordless Wednesday

Ten on Tuesday: Soup's on!

1. Potato -- including all variations, such as Potato-Leek. I don't make it often, but I sure do love it.

2. Split Pea Chowder. My mom makes this using a recipe in the Picture Cookbook from LIFE Magazine, circa the year I was born. This is an orange, oversized cookbook that is integral to my childhood and development, as is The Torch Is Passed and a gigantic Michelangelo art book that was so heavy we always looked at it two-at-a-time. This soup calls for a tablespoon or two of whole peppercorns and, though not always successful, I've been dodging peppercorns in my soup ever since I can remember and can't imagine it any other way!

3. Chicken -- also including all variations, such as what we throw together using leftovers after roasting one (some better than others), and Chicken Dumpling Soup from a local restaurant called Mary's.

4. Chili All Day. I have praised this soup year after year, sometimes numerous times a year. Delish!

6. Vegetable with or without ham, always with lots of cabbage, carrots, and celery; often with potatoes; sometimes with rutabaga.

8. Tomato -- also Campbell's, though I've made homemade Cream of Tomato Soup and it is divine. I like to make mine with milk and it is best served with a grilled cheese sandwich (made with white bread, butter, and sliced, but not ever individually wrapped, processed American cheese). 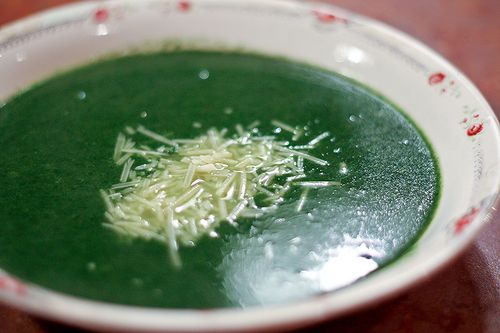 9. Cream of... almost anything. When we were kids Mom used Cream of Mushroom soup... as soup. Most people have an "Ew" reaction to that, as they've always only ever used it as an ingredient. When I met my husband, he used Cream of Celery soup as... soup... and I had an "Ew" reaction, having never used it in any way, shape or form EVER. Well, I ate it. And it was good! And now my kids have grown up eating Cream of Celery soup, too! (No one around here was ever a fan of the 'shroom as much as me.) I've also made Cream of Spinach (shown above) and Cream of Asparagus soup from scratch -- and I should like to do that again this spring when it's in season again.

10. Quick Minestrone.* I have a recipe at home that's almost nothing but opening cans of beans and tomatoes and chicken broth, adding some spinach (frozen or otherwise), and some orzo (or other small pasta) -- it was always a great stand-by recipe for busy weeknights!

11. Cioppino -- or any fish soup, stew, chowder, or boil. A whole bunch of my favorite worlds collide right there -- I love to make it, and to eat it.

12. Turkey. You might think, Isn't this the same as chicken? But no, it is not the same. There's a recipe in an old Holiday Cooking magazine that started us on a (somewhat lapsed but not forgotten) tradition of making it with homemade noodles -- good ones can be found at the grocery, but homemade... Mmm.

Combine beans and tomatoes in a large pot. Add chicken broth, spinach, and orzo. Bring to a boil, stirring to break up spinach. Reduce heat and simmer for 10 minutes, or until orzo is tender. Makes about 10 cups of soup.

See? Couldn't be easier. You've never tasted a more delicious "homemade" soup that came from so many cans.

Awesome soup list and you are right that turkey soup is entirely different from chicken soup. I'm really glad I brought leftover soup for lunch today because now I'm hungry!

Save for the Cream of Tomato soup, I have never eaten any of the Creams of as soup. Hmmm - oh, wait - Cream of Asparagus, and I quite like it.

Thanks for that quick minestrone recipe...always on the look out for the quick anything!

I love split pea but what's in the chowder? I usually put carrots and potatoes in my Split pea soup. Also love mushroom/barley soup. All my soups are chunky style- even when I make creamed soups they have chunks of whatever in them, I like chewing :)

I hope you HAVE the LIFE cookbook? that is definitely an heirloom. I'd love to see it. my mom collects cookbooks and has several hundred, but not that one! ...and the story about cream of mushroom/cream of celery soup. I hope Campbells gave you guys a wedding present :-)

(have enjoyed checking out your blog...and await photos of the wisconsin sky scarf. I'd love to one myself - I wonder how different georgia's really would be?!)

Oh, YUM! My mom didn't use that particular cookbook. . . but one very similar. I love looking through the old pages. Such great memories.

Great soup list!! When are you having me over for a bowl.

We use your Chili All Day recipe all the time! And the minestrone is so quick and tasty (Smith adds sausage) plus we add our Roasted Tomato Sauce to make it all the better. We couldn't cook a meal without you. My next step....Carole's Roast Beef!

Love the green of that spinach soup! And I'll definitely try the minestrone recipe.

I LOVE a good soup recipe. I've often made cream of mushroom soup from scratch - it's remarkably easy and about a million times better than the canned (though that's pretty good too).