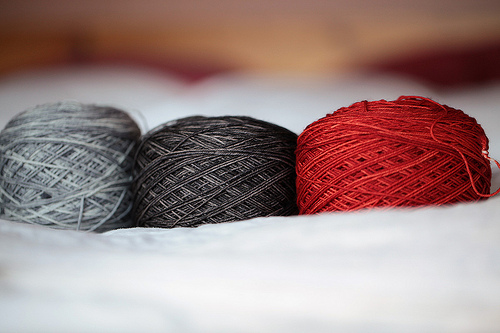 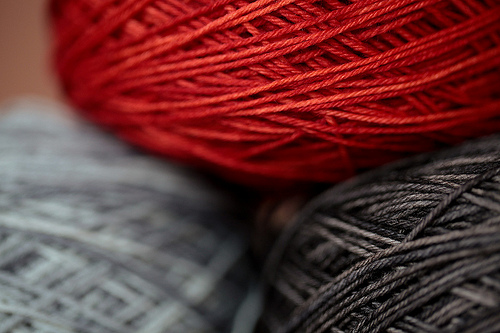 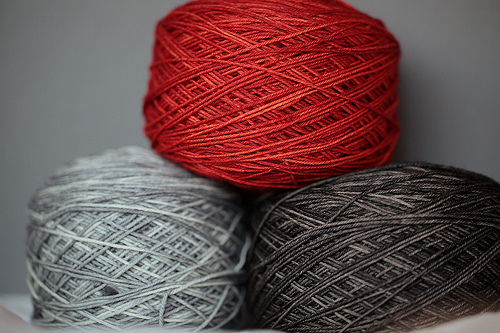 Giving the hamster sweaters and hexi-not-puffs a break, I've cast on for Color Affection.

By the way, did I mention? Hamster sweater was mailed last Saturday and I received a phone call from Mack on Monday. "It's not everyday that a hamster gets mail!!" He thought it was pretty funny that I addressed the package to Topper c/o Mack. He'd read my note and told me that they had the hamster sniff the sweater before putting it on... and they didn't put his front legs through the "arm holes" yet, but said they'd work up to it. He was thrilled. I was thrilled. I'm sure that Topper was thrilled. It was thrilling all around.

Color Affection... being affectionately and entirely knit with colors dyed by my own hand. That's thrilling, too. I've knit my yarn a few times before, but this feels different... And, wow, I hope this turns out as well as I envision. "Sock it to me, baby!" (said the red yarn).

Sigh... My very favorite color combination! It's sure to be stunning!

Beautiful yarn! I am looking forward to seeing the finished shawl.

Thank you for the hamster report.
The colors you've dyed for CA are FABULOUS! OMG, fabulous. I've picked something similar in tone, but with a brown and a tan-ish with red-orange...in lace weight. I may regret the endless yards of garter in lace weight, but we'll see. Anyway, your colors are so rich and, well, truly fabulous!

What some great yarn - what a knack you have with the colors! And then the pattern - it's really pretty - and just the right size. Can't wait for the updates along the way!

OH MY GOD!
You got the exact colors I have in my head for another affection since before I finished my first one! I was looking for them all over but couldn't find the right combination.

The colors are beautiful and they will create the perfect affection trust me :)

I love the colors for your color affection too. Beautiful. I tried to get some ordered when when the pattern first came out, but never was fast enough. Now that the pattern is available I will want to make one too. Can't wait to see yours!

Those colors are awesome together and your photos of the yarn are just gorgeous. Mack is a lucky little guy to have you for an aunt.

Topper got mail -- sweet! Great color combination for the shawl.

Oooh - I love the color combination. This will be a fab FO.

I love those yarn colors together - I'm sure it will be wonderful.

Such beautiful yarn! Those colors! Lucky, lucky you. (talented, too)

Scarlet Grey- Ohio state colors- Go Bucks. I love the colors and they will be gorgeous in CA.

I'm pretty certain I would have chosen the same colors! Worn with the standard white shirt! ;-) can not wait to see your finished piece!

the colors are amazing. in fact, they would also look great as a hampster sweater.

Love the pattern and have added it to my queue. The yarn will look lovely together.

That colorway is going to be *gorgeous*. Can't wait for the in-progress shots.