Knitting out
Eight! It's cause for celebration!

Where do I begin?

It was a pretty fab weekend. 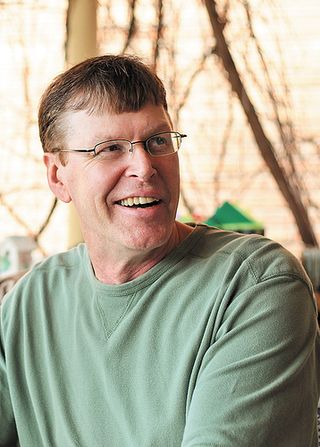 We celebrated my brother's milestone birthday with a surprise party -- outside (on March 17th!) -- and it was a lot of fun. As he was unwrapping my present(s), he and his wife both commented on how much it reminded them of a gift from her friends when she celebrated same. They'd re-gifted all of that wonderful stuff -- hemorrhoid cream, denture adhesive, etc., etc. -- to me on my 50th; I saved it, added a few things, re-bagged it (in a cool black & silver Superman gift bag), and re-re-gifted it right back!! 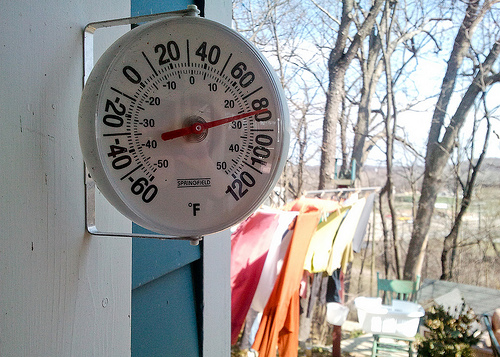 I'm trying real hard not to freak out about the weather -- over 80F in mid-March is just not normal. There's nothing I can do about it, though, so I may as well enjoy it in the moment. I've been hanging out laundry, knitting on the deck, biking and walking, etc. I think it's the light that's weirding me out -- we're just not usually outside so much when the sun is still so low and there are no leaves on the trees; shade is in short supply. Some leaves are just starting to come out... fruit and flower blossoms may not be far behind... I'll try not to worry about snow and ice. It's been a weird winter, so why not spring?

Meanwhile, have I mentioned WEAVING? 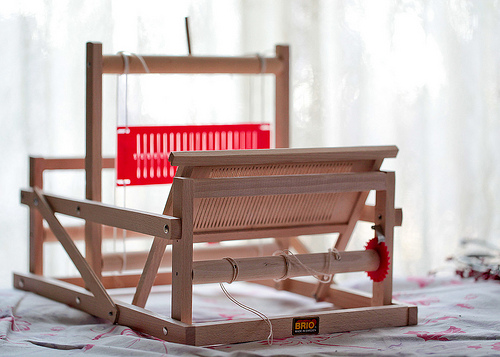 Santa Claus brought this little toy BRIO loom down the chimney for Katie many years ago. I recall that it was already warped and perhaps a little something started, but I don't know whatever happened to any of it and it was never really used, as far as I know. I rescued it a few years ago from the rummage sale/donation pile and it's been sitting ever since.

Have you signed up for Craftsy yet? I've been a member for several months and have signed up for a couple of classes. I was very excited to see a new class in Rigid Heddle Weaving by Angela Tong! I've "known" Angela for quite a while, and wrote to her about my little toy loom -- she said that she thought most of the instruction in her class would translate, and asked if I'd give it a go and review the class. 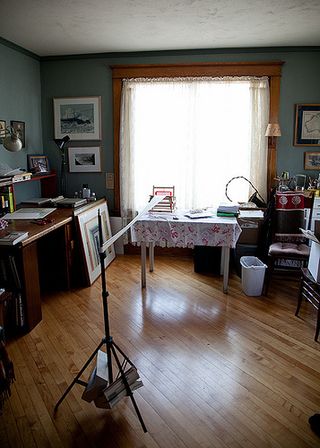 Here's my set-up yesterday to direct-warp the BRIO. I am having to improvise. The apron rods were missing, so I raided the dowel stash in the basement. If there ever was a warping peg, it's long gone now, so I employed an unused lightstand, weighted with some books, in place of that. I used a T-pin in place of a threading hook and, while T-edious, it was effective. Shuttles? Haha. Maybe it/they got mixed up with the LEGOS or Barbies or American Girl stuff that was so much a part of our lives -- I don't have any now and will make some out of cardboard, I guess. 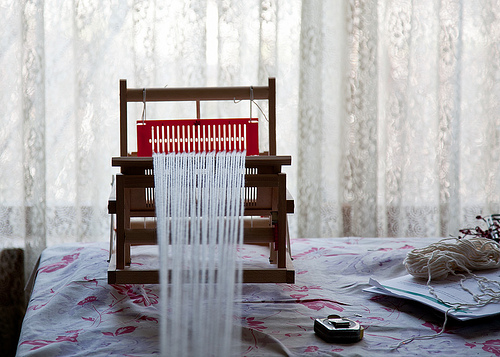 I'm not quite finished but, WOW, LOOKIT WHAT I MADE! Angela's instructions are clear and easy to follow! I watched this part twice before attempting on my own. Rusty helped as I wound it all up -- I'm thinking that perhaps a small crochet hook will fit when I start pulling threads through the holes. Think good thoughts for me. And I'll keep you posted as things progress!

I may or may not have already looked on Craigslist to see if there are any non-toy looms listed in my area. I'm really not sure whether I'll love it enough to buy a loom -- and then there's the question of time, plus I'm eventually going to learn to spin and while I don't foresee myself falling too far down that rabbit hole, one just never really knows, does one? I do know that my available time is quite limited and right now I'm very happy to spend it knitting and dyeing, occasionally taking photographs, cooking sometimes, spending time with my family, doing laundry (mostly) as needed, and occasionally swishing something around the toilet bowl.

Anyhoo, check it out if you're inclined. There's a free preview, I think. I love the Craftsy platform because it's always available, and once you buy a class it's yours forever -- and you can watch a lesson (or rewind a certain section) as many times as you need to in order for it to sink in. Yes, you can!

Warping is the hard part and look at you! It's impossible to divide our limited time amongst all the crafty things that call. Spindles and wheels sit untouched, not to mention embroidery I haven't looked at in years, but have intentions of doing (finishing). At least we're never bored!!
It's amazing you're sitting outside in March. It's very cold and snowy here, the jonquils are flattened and the blossoms I saw last week are likely frozen to death. Part of this (at least) is heading your way. Winter's not quite through.

Wow you are very creative in your use of things around you, I love it!

Started the Color Affection during the weekend, hmmmmm,,,,,

Dman you! Er - thank you for the kink to Craftsy. I have just signed up and am ready to explore.

This weather is definitely unsettling but it's so beautiful that it's hard to worry about it. Thanks for the link to Craftsy, I hadn't heard of it before. Have fun with your new skills!

I like craftsy and I'm taking a class (rather slowly) This warm weather is affecting my knitting mojo. I had a fun weekend too- picked up a knitting machine at a Sewing Smorgasbord sale for $30.