And I am tapped out.

On Saturday, there was the farmer market, of course. 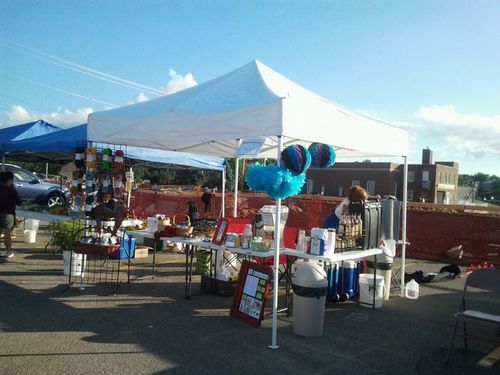 And it was another week with Alison as my market partner! And, oh, what a beautiful morning (and entire day) it was! 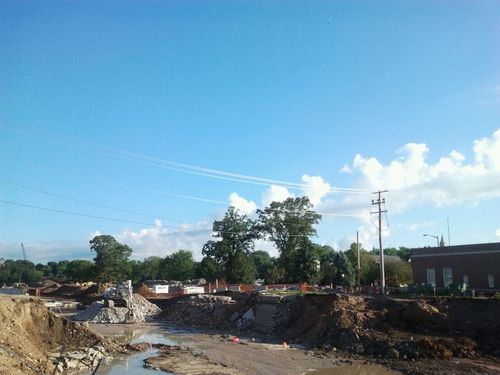 Reconstruction of the canal continues behind us. What you don't see in the photo above is the Main Street bridge, which disappeared early last week. In the grand scheme of things, it will be replaced with a pedestrian (and, hopefully, bike) bridge. It seems like the whole city's torn up and I frequently find myself "on automatic" and ending up in the middle of a construction zone. 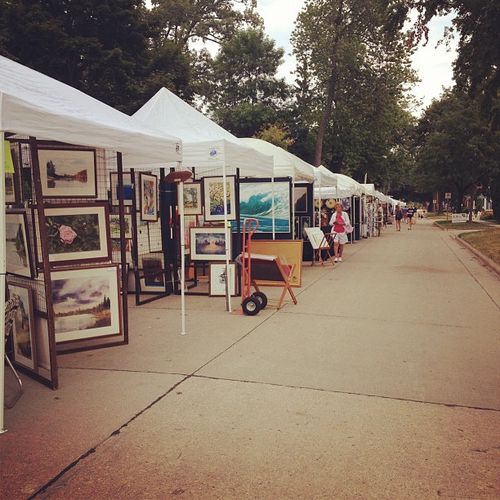 Sunday was Art at The Park. I wonder if you can tell which booth in this row might be my husband's. (Hint: Oceans and Dreams.) Katie recently began volunteering at the local art museum that sponsors this show, and they put her in charge of the volunteer effort. Ali & I greeted people to the park for the first couple of hours, and then I spent another hour or so booth-sitting for artists so they could take a facilities break.

I sat at booths for a woodworker from Marshfield (where Joy was, and I'd hoped to have visited, at Knitting Camp) and for a glass jewelry maker. I didn't really see much more of the show, though I did end up with a new pair of earrings, so apparently saw enough! 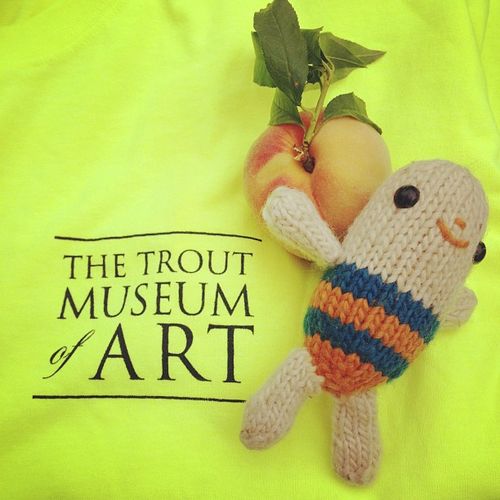 Remember Oswald? It's been over six years since I knit him for Alison (and two or three more for some of her friends). He rode shotgun in her car for quite a while, has been mascot at the coffee shop, and sometimes comes along for the ride... to the UK last year and on our Door County bike ride earlier this year... this time, to the art fair!

That neon yellow is the color of the shirts they gave to volunteers. Yikes. Katie thought she was getting a weird sunburn on her neck and under her chin from the reflection!! One thing is for sure, there was no question about who the volunteers were, and you could spot one from a mile away! 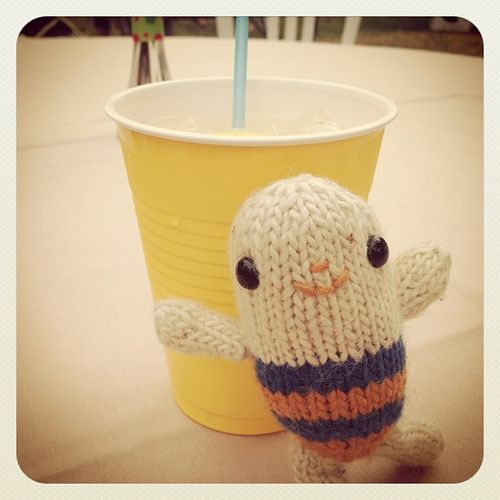 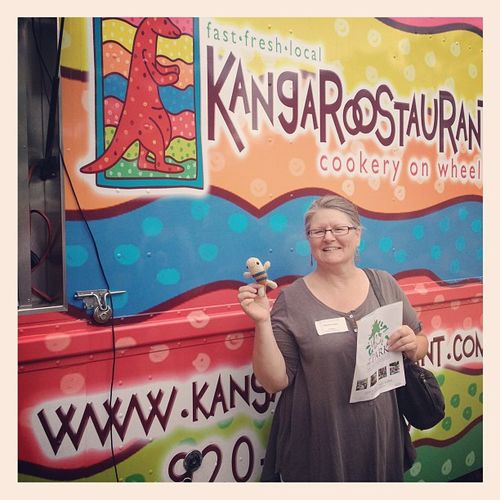 And visiting one of our favorite local food trucks.

As for knitting during the Olympics, I am... knitting during the Olympics. Or not. Last night, I found myself in that rarest of states, sitting idle like a lump on a log watching TV. Usually when that happens, I'm watching TV with my eyes closed. Anyway, I had too many ideas too late in the game to settle on anything without feeling pressured and rushed -- and I'm just not up for one more challenge right now. Sometimes it's fun, but this isn't one of those times.

I think the heat and humidity have begun to take their toll. It's sure been a weird summer so far.

Plus you spent the weekend going full on! I forgot about Oswald, but it's nice to see him again. Stay cool and don't worry about relaxing once in awhile.

Looks like a fun weekend! I'm not really doing any Olympic knitting, at least not exactly. I decided to work on that epic sock blanket whenever I'm watching but that's about it.

so we want to make oswald too.....is there a pattern somewhere we don't remember??? He's so cute
I started a ravelyhmpic shawl....after three days and too many mistakes getting the darn thing started....I'm just knitting it and it will get done when it gets done....maybe by Labor Day.....LOL

It's so tempting to try to get every. last. drop. out of summer!!! Hope you're able to kick back and do some relaxing during August.
:-)

I love Oswald. That last paragraph and last line sums it up pretty well for me too!

We all need time to recharge and reflect. No crime in sitting quietly. Love Oswald.

No Olympic knitting here either! Some sitting in the chair looking at the back of my lids for certain! Happy rest of summer!

I am finally Olympic knitting, but I find myself absorbed by the dramas and often pausing in my knitting.

It has been a weird summer. Last week I heard a guy opine on NPR that drought conditions may be the new normal. Yech.

*So* disappointed we couldn't make it work this year - guess we'll have to try, try again!

I love that little Oswald! That Jess Hutchinson Unusual Toys booklet is one of my favorite pattern booklets that I own. I have made Squarey and the Robot, Henry and Kate. I am just going to have to do a little Odd Fellow one of these days!