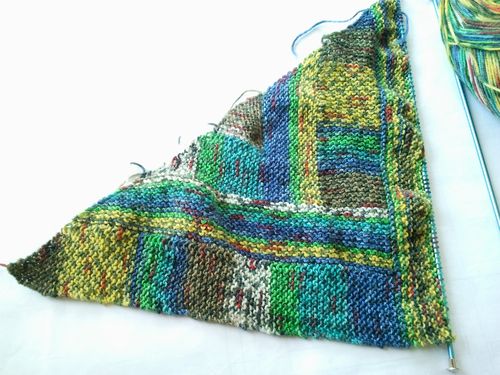 Not clown barf! Virtual friends/readers of the blog have said so, and knitting group friends have said so! (It's not much bigger than last time, but stay tuned because I'll be humming now.)

After casting off the last stitch on the TTL Mystery Shawl at knitting group the other night, I enjoyed a dish of mocha salted caramel gelatto and lemon basil sorbetto (I could marry that sorbetto) while pondering what next to pull out of my bag of tricks. My choices were Beekeeper hexies or the Hundertwasser Lokken. 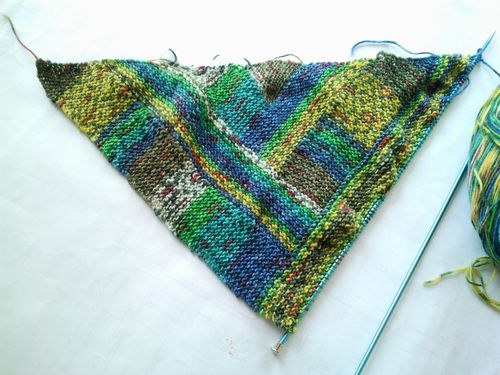 I want to see how Lokken's going to turn out; I'd sort of left it in the dust the past few weeks while working full-on TTL, so I had to take a few minutes to get reoriented and adjust. When I pulled it out, people was noticed -- and were intrigued enough to come over for a closer look. I overheard someone say that my crazy Hundertwasser version appealed to them so much more than the photo in the pattern! I love that version with the two-color self-striping yarn. It's all very interesting.

And in other news...

saab story no. 3haiku:brightly painted saabwith leaking steering fluidwill drive no longerRIP saab no. 3. you were the last in a line of greats.

definitely not clown barf! and you and i have similar luck with losing and finding things. heh.

Did you say you found the keys AFTER shelling out the $$? Drat it all. At least you have good fortune with the car.

Thankfully, we had only DECIDED to replace the key fob and hadn't actually got around to DOING it yet!! ;)

Your Lokken is looking good. Mine is at the bottom of my knitting bag under the cardi. Time for it to resurface, I think.

I think it looks like a beautiful and subtle plaid fabric. Hooray for finding the expensive key! And the car, too!

Glad you found the keys in the nick of time. Sheesh.

Love your Lokken but there is no surprise in that. And I too didn't get it if you already paid for the key or you found it just in time, I hope the second option is what happened!

My lovely automobile technician was lamenting the difficulties of repairing Saabs at this time. Vendors will not sell parts for repair/replacement because of the financial situation of the parent company.