It Starts With Food.

I am slightly short of doing the Whole30, at this point, but I am practicing for it. I think of it as prepping, in the same way that I prepped to quit smoking 7+ years ago. You know? I'd set a quit date and thought I'd just smoke like a chimney right up to the last minute, but I didn't. As I prepared to quit (figured out my main triggers and how I would respond), I just naturally cut back and, well, not that actually quitting was a breeze, but it was maybe a little bit easier. I was aware and prepared.

So I don't know exactly when I'll go whole hog on the Whole30, but for about the past two weeks I've all but eliminated dairy, grain, and added sugar from my diet. It's very "paleo" and "caveman," and it sounds quite drastic; yet, I am very Well Fed.

The Best Chicken You Will Ever Eat. Ever. is the best chicken I've ever eaten! It drew raves from the family, as well.

Dairy. I still have a splash of half & half in my coffee in the morning. And if I don't have anything planned or prepared, it's my stand-by Chobani yogurt for breakfast.

Grain. I'd been having a hard time finding bread that I like for quite a while. I've been gradually cutting down on sugar and most commercially made breads and buns have added sugar, of some sort, and are too sweet. I tried a gluten-free bread a while back and "akckakekckkakkaka" pretty much sums it up.

I think of my grandmother. Slicing a thin piece of cheese for each of us, she told me that she'd rather eat a small amount of "good" cheese once a week than the other stuff everyday. Right on, Gram.

So it hasn't been too difficult giving up bread. I had my tuna salad as a salad the other day, on a bed of spinach and with halved cherry tomatoes, and it was delicious! Rusty eats a lot of rice, but I could take it or leave it.

I did have a big bowl of Cheerios for a snack a few nights ago = grain + dairy. I'm practicing!

Sugar. As I said, I've been watching sugar consumption for a while now. I put a little bit of sugar -- 1/3 to 1/2 of the usual -- in my morning coffee with the half & half. I'll still have a bit of dark chocolate at lunch time and, what can I say, husband made oatmeal cookies the other day. I've only had a few, and at least I know what's in those oatmeal cookies and who made them. One of the local vendors at the farmer market had the most wonderful little peaches last weekend, and I've been enjoying them for "dessert" on occasion.

Why all this? Well, because I want to feel better and maybe even look better. I've quit smoking, I've quit soda, I've been eating better food, consuming more water... and with each change I've felt better, in one way or another. But still... almost always with the edema in my legs, swollen ankles (swollen everything to some degree, it seems), and great difficulty losing any weight at all.

The quality of the food I eat has been on my mind for quite a while and an awareness of what exactly "food" is -- REAL FOOD.

What about y'all? Has anyone done something like this? 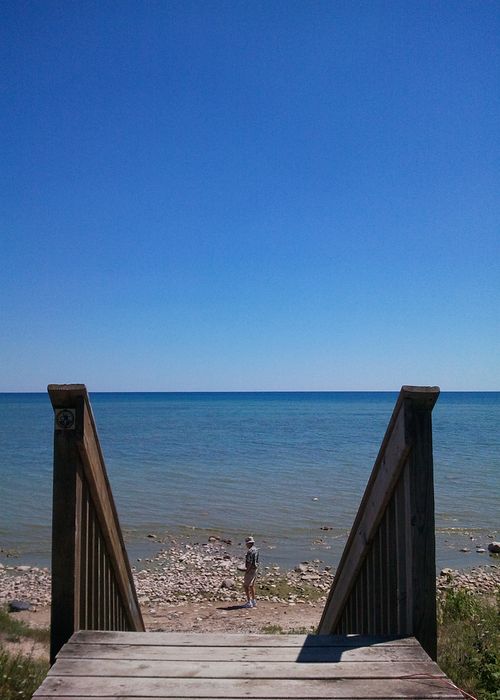 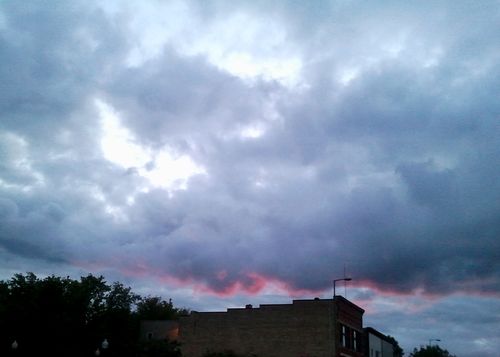 Enough rambling. How about more random photos? One from our trip to the lake a couple of weeks ago, and the other is the sky after knit night on Thursday.

Vicki...I too have been working through It Starts with Food. We joined the Weston A. Price Foundation and read up on Nourishing Traditions. We are working on the ferments (and making our own). I found I absolutely LOVE Kombucha and have also found that it helps with sweet cravings. It's funny how once you go down this path so much of it makes sense. Eating real fat and real food (doesn't have been tons but it is so much more satisfying). I have found that my fibro based edema is better on this type of lifestyle. I also think that the explanation of glucose and leptin resistence in this book is far superior to anything I have ever read. Congratulations! It sure isn't about perfection, it is definitely about the journey and striving towards a better self.

Toss a few sunflower seeds or sliced almonds into your tuna salad. The added crunch is delish! I snack on nuts and often have almond yogurt. Since grains are a no-no for me, nuts (and fruits) are my happiness.
The last photo is surreal!

Thanks for the link -- sounds interesting. I have got to do something with my sugar problem! ;-) Food for thought!

Try a splash of unsweetened almond milk instead of cream in the coffee. I gave up sugar and refined grains and dairy a while back and I actually prefer the almond milk to the sugar and milk I used to use.

I had to think about how to comment. I'm doing something similar with my nutritionist: real food, low sugar/carb, low fat and lean protein. I have to give up anything processed for twenty one days. Today was day one. It's not easy and I'm not expecting perfection, but I know this will help the edema, the pcos that plagues me, and the weight that refuses to leave. Our goal? 21 lbs in 21 days, with my medication a d a unique vitamin program. Ican have milk/ cheese but in moderation. She doesn't advocate the full paleo thing, as it is hard to sustain, also she worries about neuro function. I think you are making excellent strides! I'm in 21 days of no fruit too, but it will help my insulin resistance normalize. Dear bf is trying, but the man needs to eat so much, so he is adding grains ( whole only) to his daily meals.

I'm a big fan of Nourishing Traditions, too. I make my own bread, I don't like store-bought but I find I am wanting less and less. Carbs are good for brain power though, especially first thing in the morning. The sugar has always been the sticking point with me. I did do the 'Put the amount of sugar you put in each cup of tea or coffee for a month in one container' exercise. It is a scary big bowl! I have cut down on it quite a lot but can't seem to eliminate it totally. Since I have started making my own yoghurt last year I find I don't like the sweetened kind I used to buy - my taste buds are getting used to less sugar now. I still will eat (only homemade) sweet things - you only go through life once and I don't think there is pie on the other side!

wow - this looks like an amazing undertaking (and from the comments, it appears you are in very good company!)...I hope you post more about your experience here. I'm interested in learning more about it!

I started to comment but it got w-a-y too long. Check your email ;-)

Great post! I am loving all the links. I want to read more about the Whole30. Sounds like what I need right now.

Oy, I'm late with the blog reading. I just read Practical Paleo and Wheat Belly. Combine that with two surgeries (I'm healing fine!) and I am looking for good (better) health. I'm feeling good with one week of removing grains and sugar. I've removed most dairy but drink kefir a few times a week for the probiotic support. Well, that was probably TMI! :D I'll read your future thoughts on this approach with interest.

Ah yes....eating better. That's where I want to be. My daughter is always coaching me on the virtues of whole/natural/homegrown. And she's right. I have been thinking about the grain and dairy thing for awhile and wondering if that's at the root of my stomach issues is. I wonder Vicki, have you had any stomach/acid reflux issues and has this helped to improve them? Proud of you girlfriend.