Chickens, cousins, Grand Marais
The knitting and the end

To the end of the trail, no moose

After breakfast and some in-town doings on Wednesday morning, we drove up the Gunflint Trail. We went right to the very end -- Trail's End Cafe -- and being the end of the season, it was also slim pickin's on the menu but we shared a small celebratory dish of ice cream. 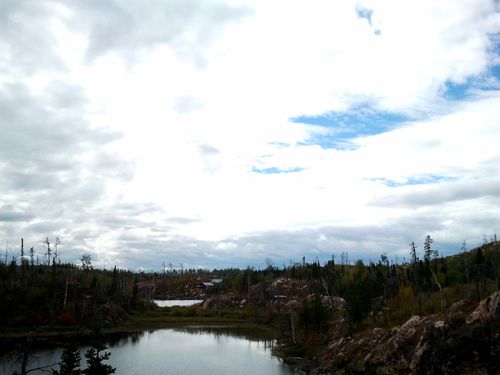 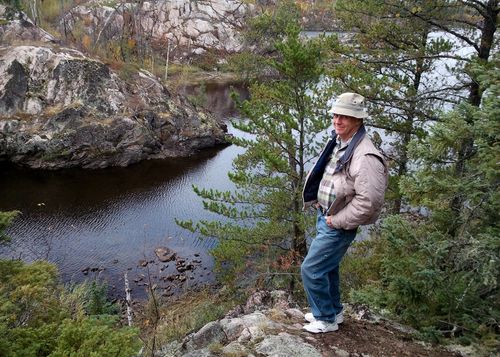 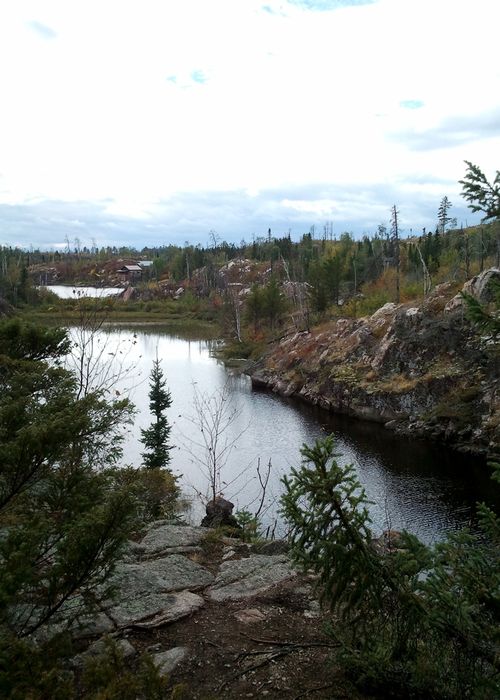 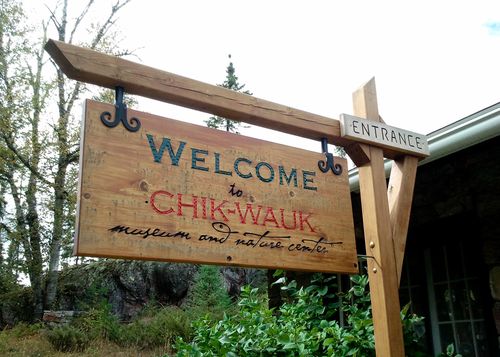 It was a beautiful drive. We meandered a bit, stopping here and there to take in the view or go for a short hike. I still haven't resolved how I feel about the scenic overlook created in the '60s (as so many of them were) that was now completely obscured by a wall of evergreen trees; it was a killer view back in the day, but now there's nothing!

We could not resist stopping when I saw the "Moose Viewing Trail" sign, though I knew, advertised as such, there wasn't likely to be a moose within 100 miles! Still, we hiked to the "viewing platform," spotting first an amazing old Cadillac, slowly being reclaimed by the forest, and then our reward. 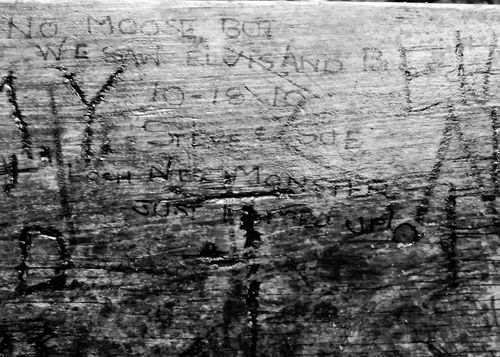 Many many dated carvings on the platform railings from those who visited before us. Our favorite:

There was laughing in the woods!! 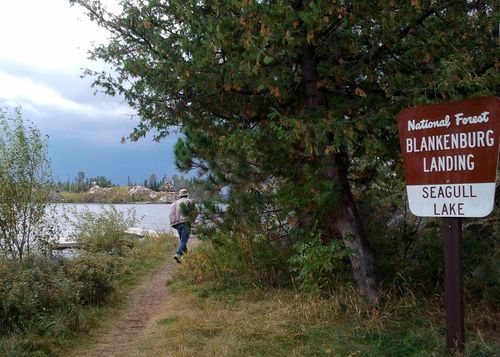 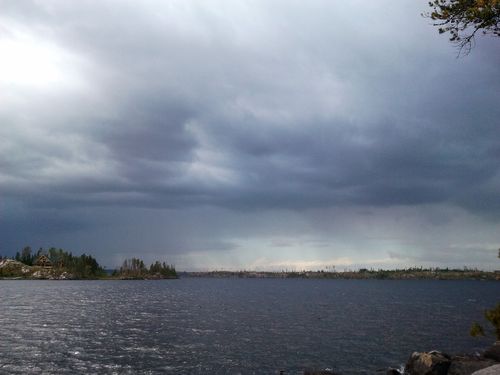 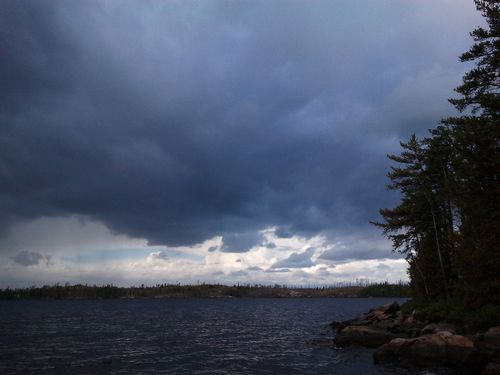 Looks like rain! It looked much worse than it was -- where we were, anyway -- we saw some fabulous clouds at the back end of a little thunderstorm that just missed us.

Let's talk about food a minute.

As of last Saturday I have lost 16 pounds (in approx. 8 weeks) by following "all-but" Whole30 guidelines (in a nutshell: real food; no sugar, no dairy, no grain). As you might imagine, being on vacation presented some challenges. Mainly, unless you're at a very fine dining establishment, you're not likely to find fresh vegetables on the menu, except for salads (and be sure to read the fine print -- man, they love to load those things up with other stuff).

We brought along a small cooler stocked with pb&j makings for Rusty, some lasagna leftovers (wheat & dairy, I know...), sardines, some fresh peaches and avocados, and we had picnic lunches on the road. We bought a huge bag of Cortland apples at an orchard in Bayfield.

Restaurants were a challenge, and not just in the vegetable department. Our B&B continental breakfast was all bakery/grain -- croissants, muffins, oatmeal, cobbler -- yummy, but all no-nos; I ended up with a little bit of fruit and a side order of bacon. I ordered things like "bacon-cheeseburger -- hold the cheese and the bun!" I found a salmon patty on the menu at one place, which was nice. Fresh fruit or cole slaw was better than fries, so I'd try to order that. I did the best I could and was most successful in avoiding grain -- except for the lasagna noodles and the pizza with wild rice on our last night in Grand Marais.

You know, there are things we grow up with and it's all we know so we just think that must be all there is... like herring. I only ever knew about "pickled herring" and have never seen it at a store any other way -- and never gave it a thought! Not so, people. Pan-fried herring was on the menu at a restaurant we'd visited and I gave it a brief thought (before ordering the salmon patty)... but we found it offered fresh at a local fish market, so we had to try it! It's caught by local fishermen right in Lake Superior, and we brought home a fillet for each of us -- along with salmon, which we knew we liked! We seasoned and fried them in a little butter -- no breading or anything (it's my favorite way to make whitefish these days). Herring has a rich flavor and I liked it. We had a little of the salmon left for Thursday.

I was on vacation, after all, and didn't want to feel deprived, so I had to allow myself some treats and I tried to choose carefully: half a muffin, a bit of chocolate, even an entire piece of flourless chocolate cake (which I demolished quite easily, thank you!), pizza, an ice cream sundae, a local beer, some wine. I think I did very well, considering, and have no regrets.

The last part of our time away proved the most challenging, or maybe I was weary of trying to navigate the dietary vacation waters... or just weak! While there was a great co-op on one side of our hotel, on the other was the "World's Greatest Donuts" shop! Thankfully, it was closed most of the time, but I stumbled through the open door on our last day and, while I intended to just get a plain yummy donut, somehow I ended up with one covered in chocolate!! Ha, I'm not perfect! Then my sister had our old stand-by family favorite CHEESE SOUP on the menu at her house. Yeah, we're gonna need a new family favorite!

That sky is exactly what my heart longs for. Thanks for sharing the picture.

It's challenging to eat right on vacation but little splurges are a good idea. Congrats on that weight loss! And I did not see a moose. Guess I'll have to come back again.

oh you too are on the hunt for the viewing of that animal... :)

Great photos as usual and congratulation for the loss of all those pounds.

My daughter finally gave in on her moose hunt & went to see the one at the MN Zoo. I classify it as cheating.
If anyone ever finds out how that cadillac made it into the woods I would love to know!

We saw a moose and calf on the Cabot Trail in Cape Breton a couple of years ago - we were way too close! but very exciting...got some great shots...Diet while on vacation? - well - I always figure, if you let it inform the decisions that you made, you did ok...it's very important to feed the soul from time to time and think about how much better you did diet-wise than if you weren't on it! Great job! (much better than I did on mine this summer!)

Gorgeous! And great job on the weight loss.

It sounds like you and Rusty had a great vacation. One of the best lines in your post is "no regrets". You're doing a great job of navigation and you had a great time, which is proof. Your photos, as always, are fabulous!

I used to have a small scar on my forehead from when I was a toddler and smacked it on the dashboard as my father drove -- and stopped suddenly -- on the Gunflint Trail back when it was not paved. No seatbelts back then.

Good work on your dietary choices. I have a link coming up on Friday's post linking the standard American diet to Type 3 diabetes, aka Alzheimer's.

Never seen a moose, either.
I've loved your daily vacation recap and congrats on the 16 pounds!