On the needles
Alioto's

Last night was the last of the 2-session "Vintage Collage" class that my friend and I took together to celebrate our birthdays. 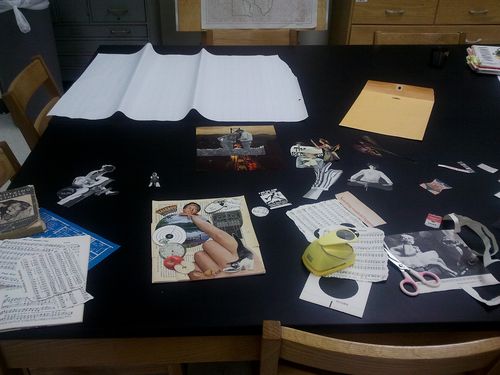 We each had our own set of tables on which to spread and sprawl. Here's mine as I continued to snip and cut and play around with my design. It's been rearranged and glued, but there is still some finishing work to be done. I love that we each painted and distressed a frame for our finished piece.

The only complaint, as it were (and we all wrote about it on the eval), is that I wished the sessions had been a week apart instead of only two days. Not enough time! Interestingly, that's what the instructor originally had in mind, but she was overruled by the powers that be.

It was a lot of fun, though, and I'm so glad we did it! I'm looking forward to building my collection of raw material and making more. I have a nice sharp scissors, a glue stick, a big bottle of Mod-Podge, and I know how to use them!!

I think it's awesome that you have opportunity to take classes like this.

And you will! This medium is right up your alley. Can't wait to see what you create!

IF you think you collect things now... LOL! The boxes and boxes of stuff I have from my collaging days. I should dabble in it again from time to time I kind of miss it. I'm glad you enjoyed the class!

I LOVE making collages! can't wait to see more of what you create.

What fun! I LOVE collage-making. I have quite a "stash" of collage-ables, but (and funny how this works) so little time to actually put them to work. Maybe you will be my inspiration . . .

I loved doing collages as a kid. I'd love to hear more about it!