I had a lunch-time date with some of the fam yesterday! 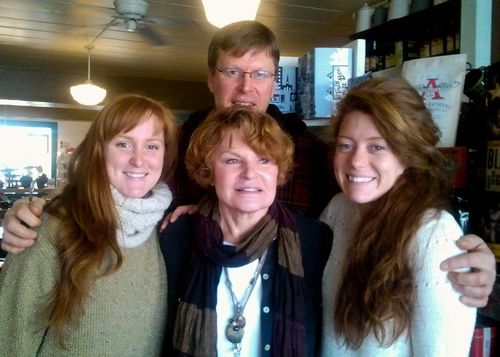 I didn't even realize, until someone else pointed it out, that it was with all the redheads! Rusty joined us for a while, too! He's never really been what you'd call a redhead, but his mother saw something to give him a nickname like that -- and one that's stuck hard for 60+ years!

I wore my boots, which meant that I wore leggings/tights, which means that I wore a dress -- one that I wore a few times to the farmers' market last summer and usually with a tie or belt. Just for grins, I thought I'd try the belt yesterday and it was about 3"-4" too big! I think I could have it made smaller -- the design is such that I can't do it myself -- but it might cost more to fix than I even paid. We'll see. Anyway, YAY!

It seemed like a good time to order a new swimming suit. It's one from Tommy Bahama's that I tried on in Chicago a few weeks ago and loved. I ordered the smaller of the two sizes I tried on that day. And then I spent a very enjoyable :20 or so last night trying on some of the other clothes in my closet -- an activity that doesn't usually have anything to do with "joy." I'm thinking I should be able to find a pair or two of shorts that fit, and then I'll be set for my tropical vacation.

I'm pondering a few sessions in a tanning bed. I don't know... I haven't done that in about a million years and my experience wasn't that great. I'm sure technology has changed since then. Is it safe? Other than that super-tan whack job that was in the news last year, I've been out of the loop. Maybe I can just be careful? Diligent with the sunscreen? I do live near The Frozen Tundra, but it hasn't been that long since I've seen the sun. I do burn sometimes, but not like the redheads. What would you do?

And everyone in the family is beautiful (or handsome, as the case may be)!
Everyone else will be some shade of brown. Don't you think it would be safe enough for a few sessions? Better than burning.

Tanning beds are not safe. Personally, if I wanted some color I would do a session or two of a good spray tan. Good ones are amazing - no more orange!

Oh, and it's a myth that getting a "base" tan will keep you from burning.

No tanning bed. Excellent sunscreen, at least SPF 30. We're all exposed to uv every day. Even in the frozen tundra. If you can't find any, I can get it year round since we are at higher risk at altitude. Then you can have fun with no worries.

Do NOT use a tanning bed. Use sunscreen and be smart about exposure. :-)

Your family is so beautiful!

Sunscreen! Get a broad spectrum one like Ombrelle. And use it liberally. Coco Chanel was wrong, pale is beautiful. Tanning beds aren't safe. You've been doing so much to get healthy, why burn the exterior like bacon? :)

I LOVE redheads - what a beautiful family!! and sunscreen ALL the way. SPF 50 or so. applied often. (and a good hat!)

Stay AWAY from tanning beds! Just use lots and lots of sunscreen and wear a hat and you'll be fine. Hooray for enjoying trying on clothes, I know just what you mean!

Sunscreen, SPF 45, is the way to go, and a light-weight cover up and hat. Natural-coloured skin is beautiful and healthy.

NO TO tanning beds. If you must be bronze go with a spray on tan from a salon that does it all the time. Or just be deligent with sunscreen. Yay for the new swimsuit and size.

I call tanning beds "wrinkle machines" and "cancer booths". Don't do it.