On Thursday morning, I watched the boys while Ann & Brian went to renew some government paperwork stuff -- which they weren't actually able to do because "the computers were down" and so, you know, as people do in Brazil, it was on to Plan B! (In this case, Annie went back to work and Brian tried for the umpteenth time to get their international banking figured out.) (FYI: It didn't get figured out until I'd already been home for days!) 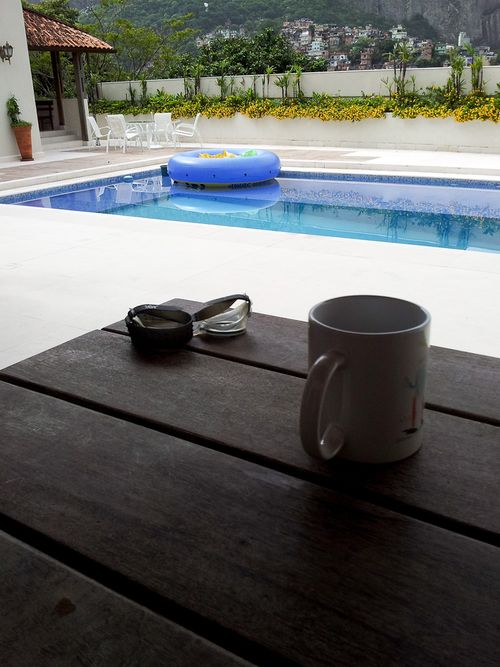 Addison had some fun with my camera phone. 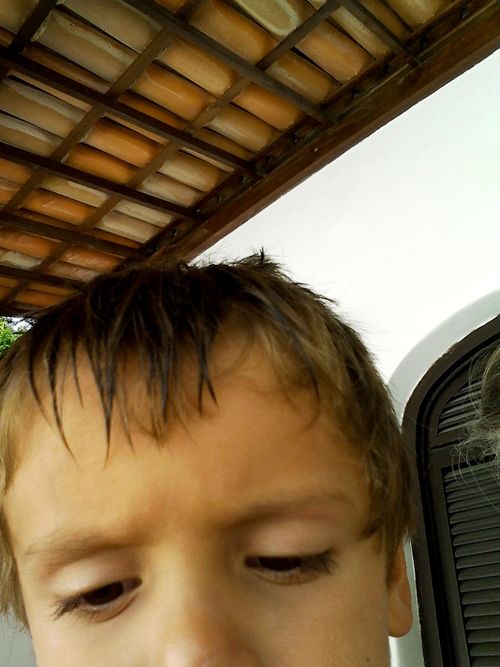 Later that day, Annie and I got to do the thing that we'd been trying to do ever since I arrived: COOK IN RIO! Originally planned for Friday, my first full day in Rio, it didn't happen. We rescheduled for another day but were late (as is often the case in Rio), so it didn't happen then, either. After many phone calls, several missed connections and problems with email, and changes of venue, some people were doubting that it would ever even happen. 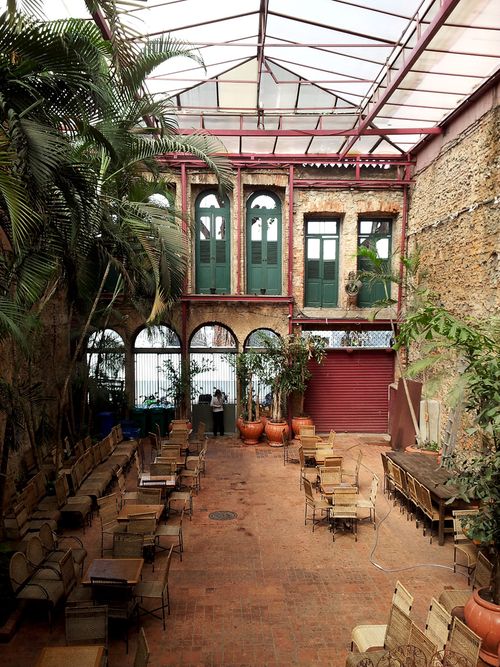 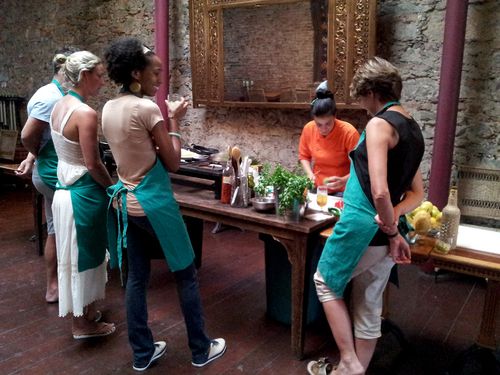 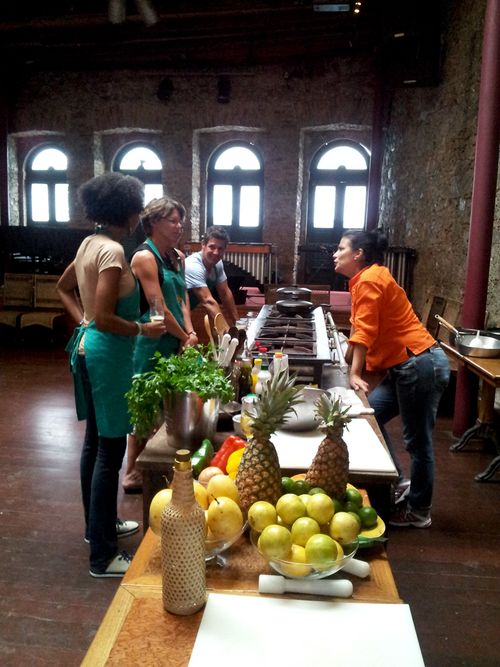 But it did and, WOW! So worth it! The venue was amazing, though if you go there's a good chance it will be elsewhere, as our instructor, Chef Simone, was planning to open her own nearby restaurant within weeks (which means it should be open now)! 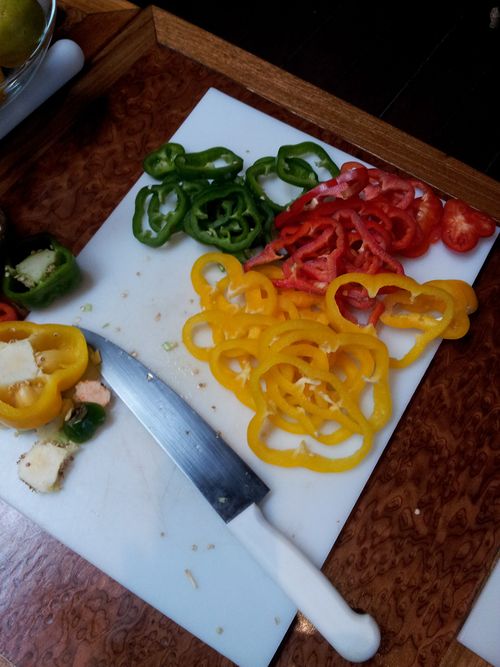 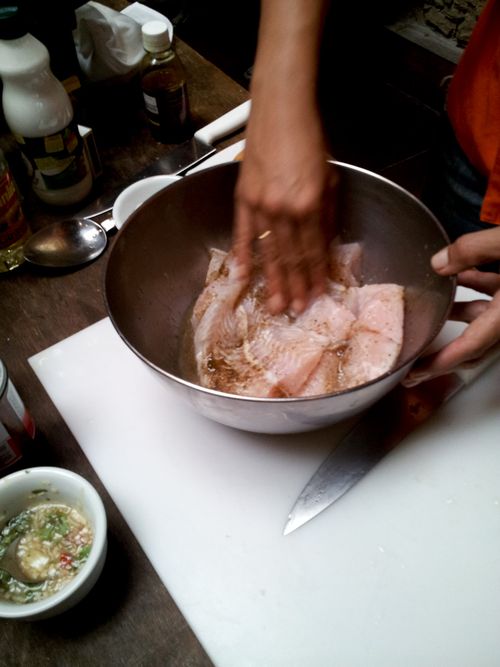 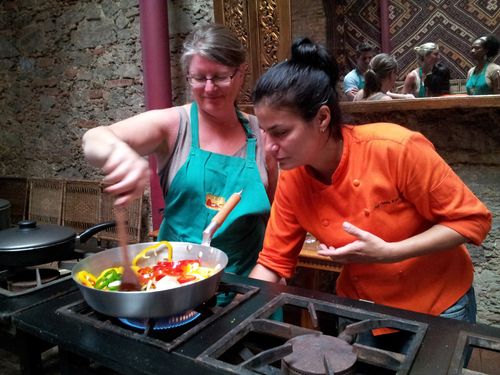 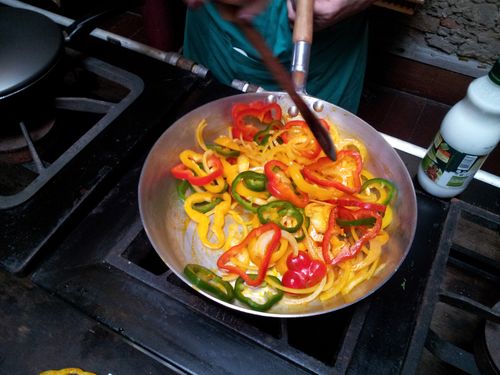 We all had little tasks to do. Annie made caipirinha, I sliced and cooked peppers for moqueca. We made fried cheese sticks (Brazilians love cheese, but it is a little different there) and farofa, too. Talking with my hands, I also flung the farofa off the stove but, luckily, much of it landed on the table rather than the floor and could be salvaged. I didn't care for farofa the first time I had it, but by this time I rather did... and this time it was made with onions and bananas, which sounds VERY weird, but was so good! 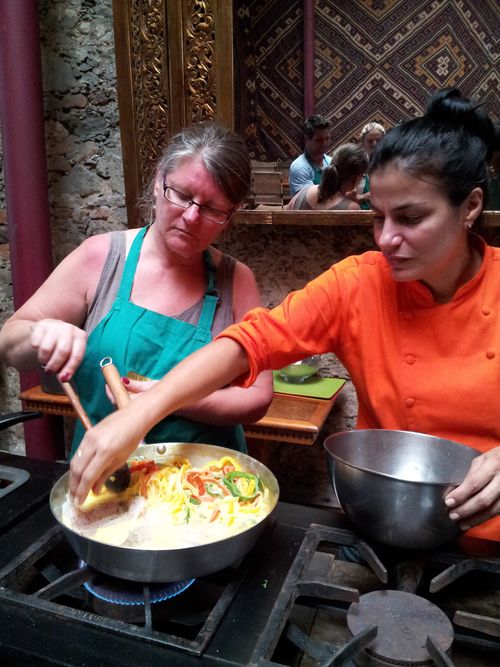 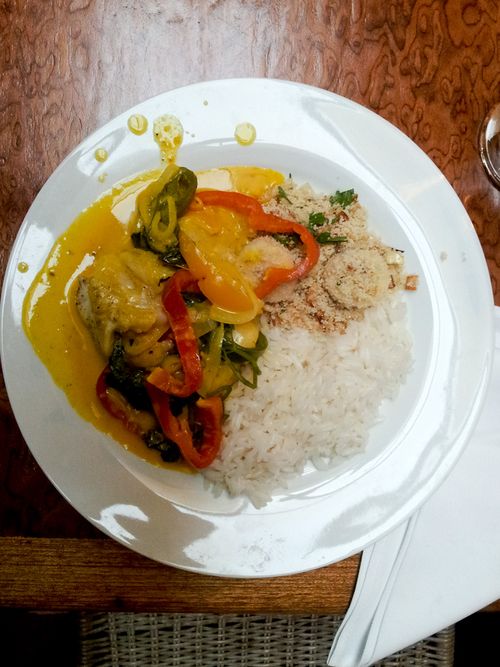 We learned so much about the history and culture of Brazil from Chef Simone, and all of the influences on Brazilian cuisine. It was simply fantastic and so worth our never giving up!

A word about food; here and there.

I wasn't terribly concerned about food while I was in Brazil because, hey, I was in Brazil! I didn't throw the book out the window, but I never said "No" to anything before me because of "diet." While I've started on this path to improve my health, I have no medical issues preventing me from eating anything I'd like.

That said, my feet, ankles, and legs did swell up quite a bit, but I can't say that it was all (or even mostly) due to diet -- travel does that to me, the weather was VASTLY different, I over-did it in the sun, etc., etc., etc.

Given my pattern over the last several weeks, I was reminded that I am definitely an emotional eater and stress plays a big part. There were a few days when I just wanted to crawl inside a bag of potato chips and forget the world for a while... but I didn't. I had a few indulgences, but even my indulgences are ridiculously controlled or just healthier than I'd have had before. It helps when there aren't bags of cookies or chips in the cupboard!

And, as of yesterday, I hit a new low in the weight department, registering 42+ pounds less on the scale than this time last year. It feels so great!

My next post will wrap up this ridiculously long travelogue. (Thank you for indulging me, it's been kind of fun to draw out and re-live my week-long tropical vacation over the past month and a half.) And, believe it or not, KNITTING is set to return! There is an FO on the blocking board, as we speak... an actual SWEATER.. for me, even! It's ne of the 8 +/- sweaters-for-me-in-progress that I have had aging around here (and one or two of them for about as many years).

Care to take a guess as to which one? In alphabetical order, is it:

Your cooking class looks amazing and I want to guess you finished the Oblique.

Your travelogue has been a joy to read and it has been fun! Food of others countries is one reason I'd like to travel and learning about why, what and HOW to cook it would be a blast!
Oblique jumped out at me (probably because it's COLD) and so did Habu For Me, but I think it was the sweater most recently started (of which I can't remember the name).

42 pounds. Careful you don't waste yourself away. I'd miss you!

Love reading about your trip! Sounds like so much fun. I "eeny-meenied" your list and landed on Cromarty. Can't wait to see it, whichever it is!

That looks so amazing! What a great experience! :)

The travelogue has been MARVELOUS. Every word. Every photo. Thanks so much for sharing your wonderful experience with us. (And that cooking! Oh! So glad you got to do it before the end of your trip.) As for which sweater. . . hmmm. I'm going to guess Highland Tempest. For no reason other than I just like the name! (And you GO on that healthy lifestyle stuff. Awesome.)

I've really enjoyed your travelogue. fabulous photos accompanied by your words...what's not to love. and WOW on the weightless, especially with everything else going on. you've done so well!! (I have no idea which sweater it's going to be, but I hope it's one you can wear now - if I finish something and can't wear it right away, I never really "bond" with the piece...and it ends up sitting in a drawer. unloved).

What a beautiful venue for cooking class!
I'm not going to guess on the sweater but I'm excited to see it!

I have loved the travelogue. It allows me to travel vicariously. The cooking class looks amazing. I love to take cooking classes. Congrats on the wt. loss! Very inspiring.
Can't wait to see your sweater.