I had my more-or-less annual check-up at the doc's office last week. It was the glucose result on the lipid profile from last year's exam that started me to look at and think about my diet from a different perspective... traditional dietary guidelines were just.not.working.

So, let's compare, shall we? My highest-ever weight was recorded in early March of last year and I've officially (on the doctor's scale) lost 44 pounds since then (most of that in the last 7 months).

My glucose was "high" last March; a 6-month check was ordered and by October it had gone down, though I was sort of bummed then that it wasn't a more dramatic reduction. I was looking forward to last week's result and, though I know I am healthier and feel better than I have in years, I was a little disappointed again that it had only gone down one more point. My doc talked about that stupid prediabetes class again. I'm sure it's not stupid at all... perhaps very helpful for some... but I just don't wanna.

Honestly, I think I just don't like my doc so much. She's nice enough and was genuinely happy when I pointed out that I'd lost 44 pounds in the past year... but I had to point it out. Bleh. I realize that this is only the second time we've met and she was ready to give birth the first time but, ya know, maybe take a peek at the chart as you walk through the door, just a quick check of the vitals. Then I get mad that it seems like I have to change doctors every time I change insurance because the cost is constantly rising and my wage is not, and then I just get pissed off about everything, so let's get back to those numbers and the parts that I like!

My cholesterol is high -- higher than it's ever been! Total cholesterol and LDL have both jumped, but I eat a fair amount of high-fat foods, though, so that's neither surprising nor alarming. It's all context. HDL (the good) has taken a giant leap, triglycerides and VLDL are low, as is the cholesterol/HDL ratio. Including numbers from my first-ever panel in 1999 (because they were on the report!) (I was 40).

Giant leaps. And in other news, my follow-up mammogram was fine and I'm back on an annual schedule, and nothing unusual was found in the ultrasound about which I wasn't worried but am quite relieved.

Next up (don't yell): Colonoscopy. I haven't had one yet.

My stepdad buried his eldest son yesterday. Joey was 45 and his dad asked that we all be more diligent in getting those regular, early diagnostic tests done.

On a lighter note, I'm so happy I upgraded my phone in December so I could start using Instagram! And also, dual-view camera again! I noticed a lot of selfies as I flipped through photo files in Brazil and had to laugh! I've continued to take a few here and there. Also, have posted an Instagram photo every day this year, so far, except for two. Not bad. 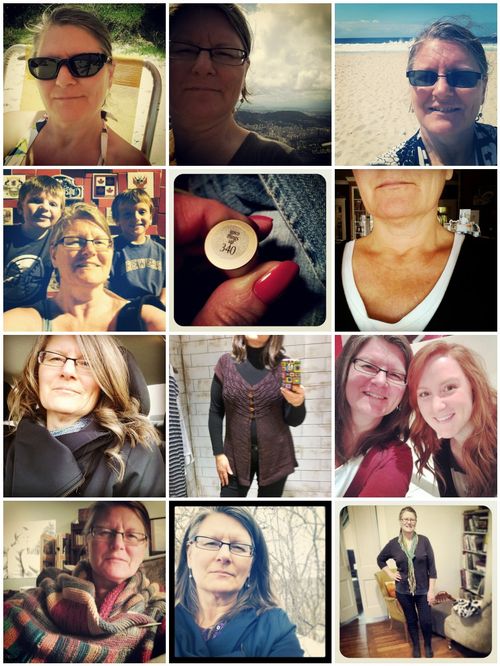 1. I was in my swimming suit all day today. I don't think that's happened since I was 9. #riodejaneiro #brazil #beachbum, 2. Way up high. Pao de Acucar. #brazil #day3 #haveimentionedthatthisissimplyamazing, 3. Nice way to spend a morning. #sao conrado #rio, 4. With the boys at Escada de Selaron. #amazingriodejaneiro #selaronsadness, 5. Let's spice things up., 6. I *am* sorry about my neck, but hello collarbones! I didn't think we'd ever see each other again., 7. You're not the only one, @january_one! After a visit to the salon today, I feel pretty, too! #magic, 8. Low Tide., 9. Good LavAzza Morning with @lovenotwarhol. Mmm, Caffe Americano., 10. Favorite double-duty knitted object... both blanket and shawl. #constantwintercompanion #iwillmissit #readyforspring, 11. Outside and not needing to be zipped up all the way. It could be spring is coming. #smallpleasures, 12. How low can she go? Lowest weight in 8 years... skinny jeans & boots (cold snowy ick outside today). So happy.

Have a great weekend, everyone!

I'm all for firing doctors and finding someone you like and can talk to. I looked a few years ago and love my current guy (who takes all insurances).
Just keep up the good work and improve the areas you haven't had a chance to (like early tests and exercise). I'll bet you see a change in the next year as you continue on this new path.

Congratulations on the 44 lbs. I only wish I could do as good. Your other numbers look very similar to mine, forced to use drugs since all the "diet and exercise" hasn't done enough. As far as the colonoscopy, the preparation is the less then pleasant part while the actual procedure isn't even remembered. Small price for a highly curable if caught early condition.

Love reading you. Thanks!

Awesome on the 44 pounds! Pay attention to your body and ignore the charts. Conspiracy Theory--all the numbers are made up by the drug companies to sell more drugs. If you feel fab, just go with it!

So much improvement in so many aspects of your life since I started reading you. Hello, smoking? And if you don't like your doctor, fire her. If you don't have confidence in the person taking care of you, you're less likely to ask all the questions that concern you.

Don't fear the colonoscopy. My doctor recommended Swanson chicken broth on your liquid day.. It was tastier than others.

Wow you are doing such an awesome job of taking care of yourself! The hardest thing is to balance all we do and be good to yourself at the same time; but you've got that down! Keep listening and IMHO find another doctor who treats you as a whole person and not a chart to be conquered. Hugs! :)

You're doing great! I've got my physical next month, but for the past few years I've had similar cholesterol issues - my LDL is a bit high, but my HDL is also very high, so I don't worry about it. Your ratio is excellent, and that's probably more important.

Congratulations on all the strides you've made in taking care of yourself! You are an inspiration!

Re: The colonoscopy. See if you can do the Gatorade prep; it's easier to stomach than the traditional prep. (Bad pun intended...)

Yay for you and your health! Excellent job.

I still have to schedule my colonoscopy so you're not alone there. There's research related to fasting glucose and lower-carb eating indicating your numbers aren't so bad, so don't be too bummed.

You should definitely switch doctors. If they can't acknowledge/note a 44 pound change - even if they do so by a quick review of your charts- they are not paying enough attention to the whole you.
I am indignant for you! Congratulations again on the changes. Inspiring!

Congrats on the changes.

Also, I'm a diabetic. You might just start with research. The diabetes classes have a tendency to be at least 10 years behind. It's always terribly annoying. Hang in and if you just want to talk to someone about the diabetes thing let me know.

I tend to think that the numbers tell part of the story; the way you feel tells another part of the story. But the way the story progresses? That's totally up to YOU! I'm so excited to read about your progress. What wonderful, meaningful changes you've brought into your life.

(But, now? You've GOT to get a different doctor! One who will cheer along with you when you're making significant changes in your lifestyle. One that you LIKE. Remember: You're the CEO of Your Own Health!)

Congratulations on all the great numbers...and on feeling AND looking so fabulous! (and good luck on finding a new doctor - and I do mean "luck" - there is some science to finding a good doctor, but finding the "right" one for you is, I think, a lot luck) - and we can commiserate on the colonoscopy; my 2nd is due this year :-)

you are doing GREAT! Don't be discouraged. You need a doc that is thorough and has a good bedside manner. Ask everyone you know if they can recommend a doc til you find one you like or try a nurse practitioner. You will prolly like them better.