The Rest of the Story: Stretchy/Loose Cast-on
An all-wedding Wednesday

I've eaten at a few picnic tables in the past few years, but haven't planned an actual picnic in I don't know how long, so I'm skipping the official topic of today's Ten on Tuesday. I will share the first two things that popped into my head, though:

Glasses never occurred to me until I read Kym's post, so my picnic will be the one where we pass the bottle. Heh.

How about a first-ever ToT follow-up, instead. The last Ten on Tuesday post in April was: 10 Things I'm Looking Forward To In May. Let's see how that's going.

1.  Hair cut (more likely, trim) tomorrow! I will also be auditioning -- or at least discussing -- the hairstyle that I have in mind for the wedding.

A very important #1 that I was excited about and looking forward to, and I FORGOT! Happily, my girl Kate was able to squeeze me in after work a few days later. Sheesh. My hairstyle for the wedding was met with approval, and I've saved a couple similar/detailed photos to Evernote since then. 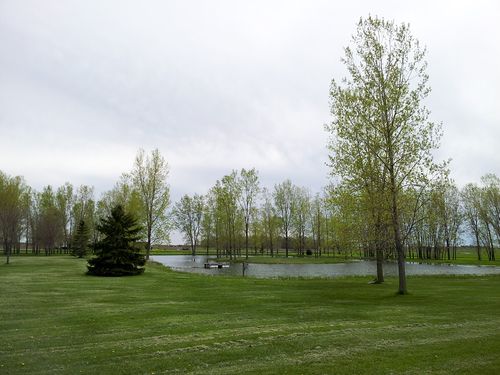 Dinner with the in-laws was FANTASTIC! We picked them up at their house (aka, wedding venue!) and I've been out there a couple more times... and will likely be a much more frequent visitor over the next few weeks! From the photo was taken, above, I'd be looking through the tent (reception); weather permitting, the ceremony will be held in a round-ish clearing just barely visible beyond and to the left of that darkest evergreen tree.

3.  On Saturday, Ali and I will be heading to Oshkosh and the Natural Product & Organic Food Expo -- Joel Salatin and Will Allen among the highlights.

I really enjoyed the food expo -- and ran into the in-laws there, too! There were a lot of vendors and I even found authentic and local pao de queijo! The speaker schedule wasn't very tight, which was sort of exasperating, but because of that we caught a portion of a panel discussion with all of the day's speakers, led by Kyle Cherek of Wisconsin Foodie. It was very interesting and I could have listened all day but, of course, we didn't have all day! We heard Will's presentation about Growing Power, and one of Joel's two talks that day.

It was announced a couple of days ago that none other than Michael Pollan will be featured at the Country Living & Natural Health Expo in January!

4.  Visitors from Oregon, their daughter (a sometime guest at our house) graduating from Lawrence University this year and they'll be here over the Mother's Day weekend for her recital.

Visitors have come and gone. Our time together was brief -- they brought over a delightful meal of Greek take-away to share -- but they had a nice time exploring the area with their daughter. 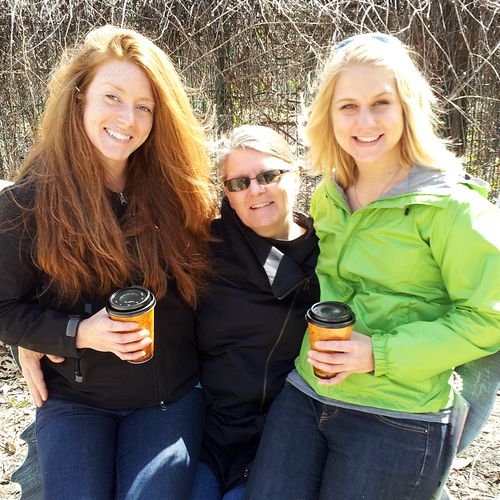 Been there! (at the Green Bay Botanical Garden) 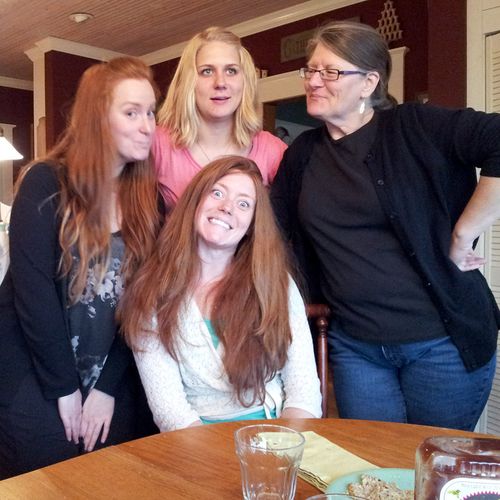 She's home! Sort of. She left yesterday for a week of camping with friends. Next week she'll be gone for a week of orientation for her camp counselor job. And then she'll be working all summer... at camp!

The girls are talking about finally taking a summer road trip together... also involving camping... as it may never be easier than NOW. And, sadly, we are all used to high gas prices -- which have been "coming down" a bit, but are still hella lot more than they used to be. But you know that. They're talking about going to Mount Rushmore, too, and recreating the awesome photo I took of my sisters there in 1979.

7.  The Master Gardeners' Annual Plant Sale on the 18th.

8.  Hopefully, an overnighter to Milwaukee for an art opening, premiere of an animated music video (by my cousin's husband) featuring music from the Tritonics new single "Smoky Places" and after-party. Just because... it sounds like fun!

I found a great deal at The Pfister, a wonderful old hotel in downtown Milwaukee! We were able to walk almost everywhere -- to dinner at Rodizio Grill, a Brazilian Steakhouse, and to the Milwaukee Art Museum.

The highlight was the Smoky Places art opening/video premier at Dominion Gallery, and the after party at The Uptowner. Exhibiting artists included my cousin Rae and her husband Michael. Michael premiered the animated music video, below, with music from the Tritonics.

And Rae's shoes are so great! 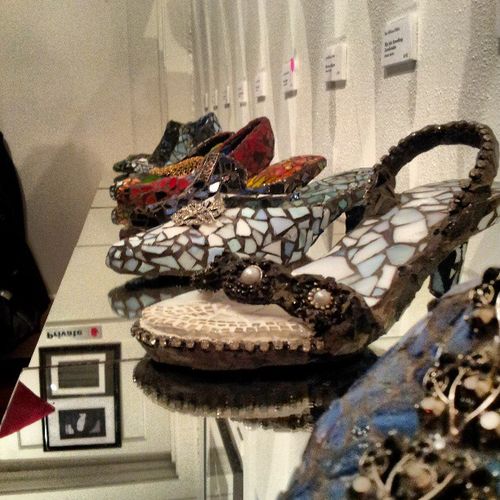 We had so much fun. And even dancing! Home by midnight, we walked to the Milwaukee Art Museum after breakfast on Saturday. 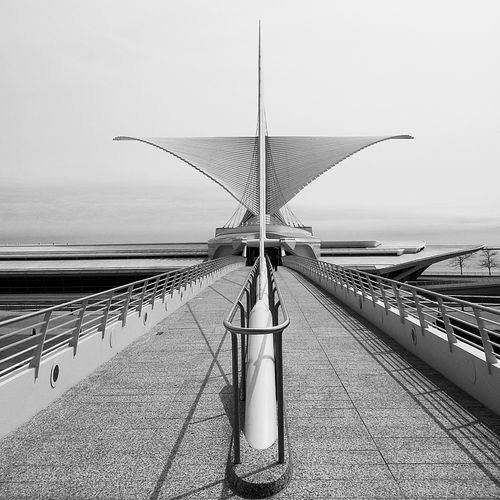 That is one amazing place. The architecture -- including those moveable wings -- of the Quadracci Pavilion is simply breathtaking. 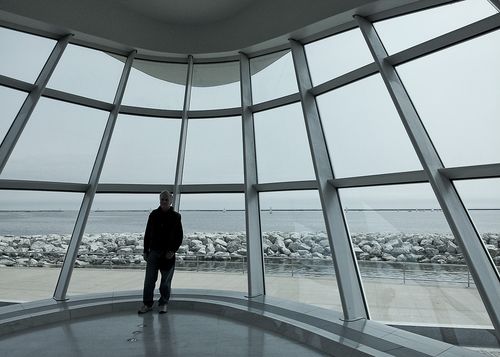 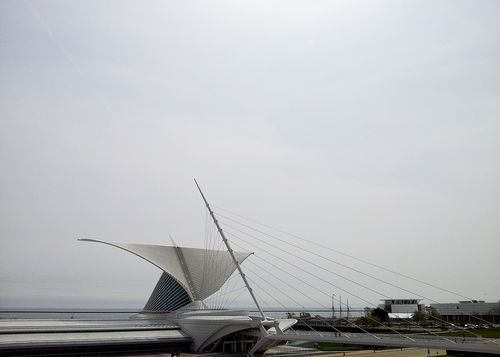 This weekend! My sister will be coming on Saturday and we'll be doing a work day on Sunday, planting Mom's window boxes, etc., sort of a belated/continuation of her Mother's Day gift.

10.  My knitting goal for May will be to finish the two shawls that I'm working on for the wedding... and NOT start another baby sweater. Heh. I'm more than half-way on Mexican Wisconsin Wedding and made a good start on Frambuesa last night. Second try! There's errata, for one thing, and some wonkiness regarding stitch marker placement and repeats... I just move them around as needed and "read" my knitting -- as long as it reads correctly, I'm good. The markers are eventually removed. I already know that I'm going to LOVE this shawl!

I've finished the Wisconsin Wedding shawl! It awaits overdyeing and blocking... as soon as Frambuesa v.2 is finished. The casting on issue has been resolved, and knitting is happening -- the border is almost complete. It'll get done.

BONUS:  11.  I've ramped up the dyeing a tiny bit in the last month or so, the impetus being some fun custom orders and projects! Oh, I miss it!! As things continue to improve and progress in other areas of life, I intend to be doing much more of that beginning in May.

Custom orders/projects continue... Have you seen Cara's Celestarium? It was so much fun working with her to make the color just what she wanted for this project, and then to watch the knitting progress! The shawl is amazing -- her knitting is always so beautiful -- you must read her notes and, seriously, she says that it's not difficult at all! It's just killing me that I can't wrap it around my shoulders and feel it!

It looks like in most cases you exceeded your plans and had a wonderful time doing it! Congrats! I love the picture of you and your girls :)

I thought the picnic topic would be a good one but it fell kind of flat. Oh well. I'd be happy to sit with you and pass a bottle of wind around, though! Sounds like your May has been awesome and productive, too.

Pass the bottle! This summer you have a life full to the brim! I'm also dying to see Cara's Celestarium and wish I had the wherewithal to knit my own!

Good times so far and the month is not over yet!
Those shoes are so cool. I can't wait to see all the wedding shawls on shoulders!

whew - aren't we glad May is a long month and the days are getting longer!! looks like you're having a great time - with many more to come. ENJOY!

If May was as busy as it sounds, you'll probably be reluctant to pass that bottle of wine. ;^) Love the Pfister, it used to be a highlite of my business trips to Milwaukee - and the nice people in that town.

Love the follow up! I'm getting really excited about the wedding. I don't know how you can stand it! :-)

Loved the followup to the blog.I'm getting excited about the wedding and I'm not even involved. Can't wait to see the shawls when they are done.