The Rest of the Story: Stretchy/Loose Cast-on

There is some great discussion in the previous post's comments about loose cast-ons, and I learned a thing or two. There's nothing like hearing others' experiences to help inform a decision.

I'd all but decided on the Knitted Cast-on as demonstrated by Nancy Bush because, well, Nancy Bush. And Estonian lace knitting. It seemed logical. I've used that method before and rather like it, but also felt that I'd still need to carefully watch my tension to keep it loose.

Then Cheryl left a very thoughtful comment in which she mentioned June Hemmons Hiatt and The Principles of Knitting, and her general thoughts about the other options.

I happen to have that book, though Cheryl linked to a PDF of the Double Needle Cast-on that she suggested, as well as to a video demonstrating the method (aka Rolled Double Needle Cast-on). I'm not sure what I'd have ended up with had I not had the video, which effectively demonstrated the "rolled" part of the equation; I did not get that from the written instruction. I needed both in order to get it. 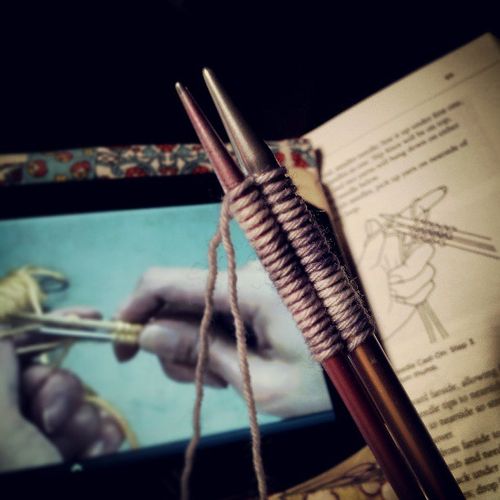 The method calls for using two needles -- it's unwritten, but I guess assumed that the working needle would be the same as for the project, and the second a size smaller. Not wanting to be stung again, I decided to cast on a test swatch using a needle a few sizes larger than the working needle, then knitting on to the proper size needle as I worked the first row. I cast on 20 or so stitches and proceeded to work several rows of the pattern. The bottom edge was definitely looser and able to be stretched.

I'd mentioned to Cheryl that I'd upped the needle size and she replied that she never had... so before committing to 300 +/- stitches, I thought I'd also try with the proper size. Lo and behold, it was still very loose and looked much nicer; in contrast, the previous attempt looked a bit too loose and even sloppy.

Now, I had saved those little swatches to show, but due to an unfortunate tangle in my knitting bag... um, there's not much left to show. I will do them again, though, and will also show the new cast-on edge compared to the original before it's frogged to reclaim the yarn. 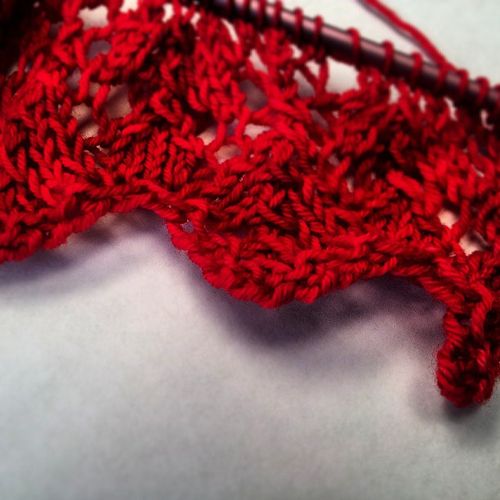 There's a marked difference already in v.2 and how wavy the edge; that wasn't nearly as evident as I knit v.1. 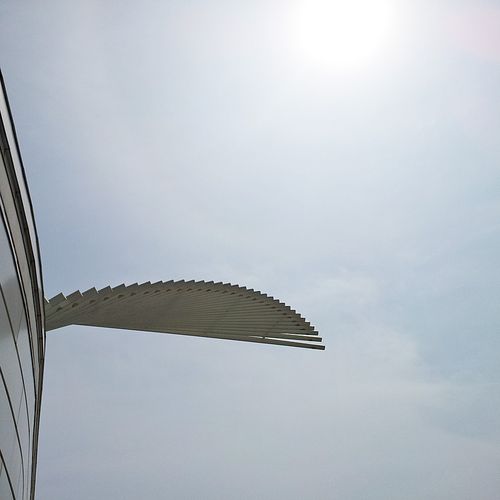 Once I got the rhythm, the casting on went quite smoothly, and I even did it in the car on the way to Milwaukee! (More about that in a day or two.) The only thing I'd do differently is to work from both ends of the ball -- or wind off the generous amount I thought I'd need, and then a fair bit more! It took a little more than an hour, and I ran out of yarn with 281 of 321 stitches, but I can live with that! The small shawl is 221 stitches and the large is 321 stitches; my shawl will be a medium-sized hybrid!

I'm glad you found something that works. I read all the suggestions people left on your previous post and I decided I definitely didn't have better advice than any of them. Needless to say, I'm looking forward to seeing more of this project.

Glad that worked out for you! I think it's the perfect cast-on when you're casting on a very wavy border. Stretchy, but not sloppy. June Hemmons Hiatt knows her stuff.

'Medium sized hybrid.' I like a knitter that can improvise. Knitting can be rather MacGyver-ish, at least mine can. Knit like the wind!

The ever flexible Vicki! Cheryl is a smart knitter and she's always trying new things. She's nice to know. The cast on edge looks great!

I'm glad you found something that pleases you; that is such a wonderful feeling! I love the bold and beautiful red you have chosen for this project. :)

I have been using that cast on for more than 30 years and it's my go to when stretchy but not sloppy is needed. So glad someone suggested it to you. I remember it took me a long time to figure it out from the book there being not only no Ravelry or video but no personal computers back then.

That book is still on my wish list! I enjoyed reading the discussion of the two posts and hope I remember to come back to this post when I need a similar cast-on!