Ten on Tuesday: The Heat is ON

Ten on Tuesday:  10 Ways To Beat The Heat

Humid or dry, hot is hot. I have found, though, that 90F and humid here is a LOT different than 90F and humid in, say, Rio de Janeiro -- it's "hotter" here (my brother-in-law agrees)! It is humid there, of course; tropical and "moist" all the time. The sheets felt damp every night when I crawled into bed, and vertical file systems aren't used much because the papers simply wilt, but my skin never looked or felt better! In Rio, and probably most coastal areas, there's almost always some air movement, the air never gets quite as "thick" as here. Or as hot.

1. Thanks to some big trees, I'm able to keep the house cool with a few window air conditioners and strategically placed fans. South- and west-facing windows are kept covered. Central air is always on the wish list (the window units can be noisy)!

2. Grilling out is a great way to keep the heat out of the kitchen.

4. When I cook indoors/at home, I try to be efficient about it and make a quantity of something -- on Sunday it was Greek Meatballs. There was enough for dinner and a couple of lunches! (I made mine with goat instead of lamb because I have a convenient local source every Saturday at the farmer market -- delicious!)

5. Alongside the meatballs (both the Italian version, weekend before last, and the Greek last weekend), I made Bell Pepper Slaw. So easy! I used "broccoli slaw" for mine, and probably used fewer peppers but more tomatoes the first time -- and made it in the jar and a day ahead. We all agreed that the jar was not really necessary but sort of cool. The second time, I used even fewer peppers and no tomatoes -- because I didn't have any -- and served it immediately. It's that kind of recipe... and that time of year.

7. Staying hydrated is important! In addition to water, I've been drinking an Arnold Palmer or three everyday. I usually make mine with a lot of tea and just a bit of lemonade, but sometimes the other way around. Also, an ice cold beer -- oooh, I love it best in a frosty mug/glass -- is so refreshing on a hot summer day!

8. One of my favorite places to beat the heat is at the movies. 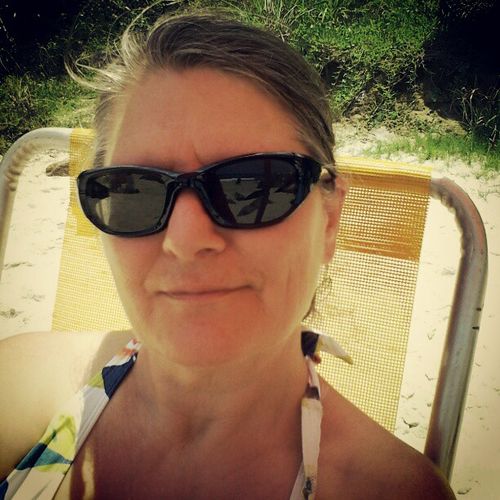 10. Though I now own my first suit in nearly two decades, I'm not much of a swimmer, but the water is a great place to beat the heat! Lounging on a beach chair, under an umbrella, near enough to go wading, sipping on fresh in-the-coconut coconut water... Or something similar.  :)

According to the forecast, tomorrow's going to be the hottest day this week, followed by stormy weather on Thursday & Friday, leaving a much nicer weekend in the wake. Yeah. I'll take it!

Hmmm . . . I guess you don't want to know that I have my space heater on right now. This office is freezing!

A lot of us are feelin' hot hot hot. It's better than being cold!

Since I'm no fan of winters frozen air, I dare not complain about the heat. We have had more humidity this summer than I remember, but we welcome the 15 minutes of rain each day.

Skirts! I live in skirts during the summer. so cool! (And fun besides.) Keep cool! (Love the song.)

It's freakin' hot alright and the AC at work is not working so it's a two shower day every day. Skirts and sleeveless anything works. Grilling burgers tonight and salad. The lettuce hasn't bolted yet but it's close so we are eating huge salads every day.
Funny, I've drunk Arnold Palmers for ever and never heard them called that!

As Carole said, the heat is A LOT better than being cold.

Yes, summer dresses! I need to get a few more--especially as they are probably now on sale! Feel funky-good with no effort at all. I even garden in them! I've made the tea, so now I'm looking into flavorings. I have to check out your Arnold Palmer recipe again!
:)