I am in love with the little hedgehog!! 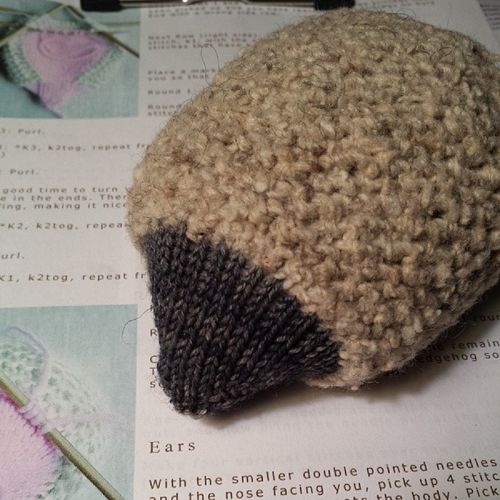 You can't knit just one! 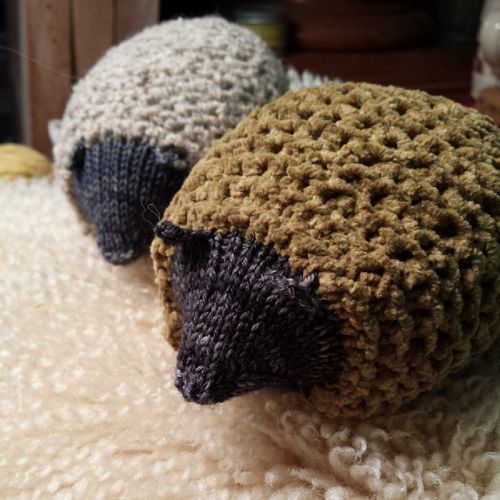 The first photo is prior to ears, somehow thinking that they were going to be a challenge. It took longer to choose placement than it did to knit them! They are both still in need of nose & eye embellishment.

It is the most wonderful pattern! Late last year I watched as one hedgie after another roll off the needles of another grandma-to-be, each one as adorable as the last, so when I learned that I was also going to be a grandma... well, I just knew that I'd be knitting one or two or nine of these things! It was just a matter of time!

They take the smallest bit of each yarn.

I've used some leftover sock yarn for the face/belly of each (similar colors, but one's from a baby cardi, the other from my red/gray/black Color Affection) (still!).

The body on the lighter one is Classic Elite Mackenzie, and on the other it's Rowan Chunky Chenille -- the softest, squishiest, chubbiest little hedgie ever! Both of those yarns are absolutely fabulous, which means, of course, that both are discontinued! I have almost two hanks of the Mackenzie, but that's about it for the Chunky Chenille, so that little hedgie is destined to be an heirloom! Enhancing their sentimental value, both of those yarns are from the small stash I inherited from Sharon.

A third is already on the needles! I love them even more now that I can see them almost finished!! I may have to whip up a amily or two!

So cute! I can't decide which I like best but I think it's the green/yellow one!

Oh my! they remind me of Shmulik Kipod (=hedgehog in Hebrew) a Hebrew children book that was the favorite of my little friend Nitzan (she is all grown up now - 18!).

We had a private joke derived from the book it went: kipod... ay! and you had to quickly withdraw your hand from an imaginary very prickly kipod! :)

Those are adorable. I especially like the chenille one. It just looks so incredibly soft.

Those are adorable! And I am not all that fond of The Cute, but I would make an exception for these :-)

Why should Hedgies be brown! I LOVE, LOVE the green Hedgie best.

Nonstop adorable-ness! So much fun.

OMG there are so many little ones in my family right now...I love these!