Randomly, as one does.

And does it get any more random than Andy Gibb on the cover of a knitting magazine? 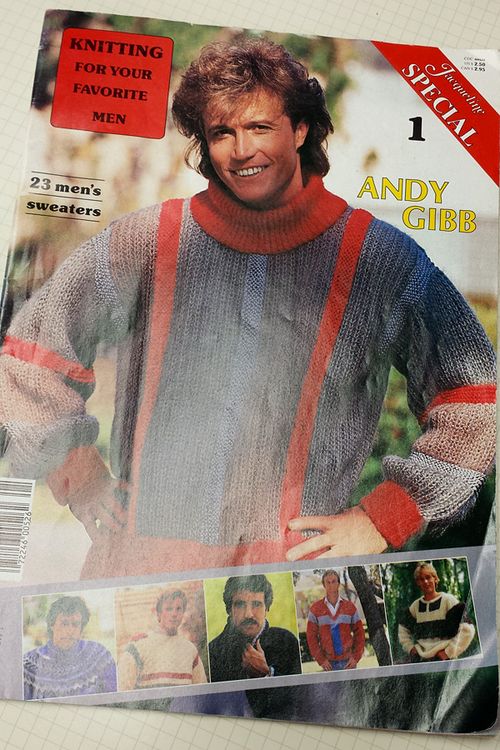 It's a "Jacqueline Special" from 1984, "Knitting For Your Favorite Men." Within? The likes of William R. Moses (Falcon Crest), Timothy Murphy (Dallas), John James and Geoffrey Scott (Dynasty), Ted Shackelford (Dallas and Knots Landing), Carlo Imperato (Fame), and a few others.

Prime time soaps RULED in the 80s! They all seemed loosely related, too, didn't they? Lots of spin-offs. Not unlike the CSI and Law & Order "franchises" today. 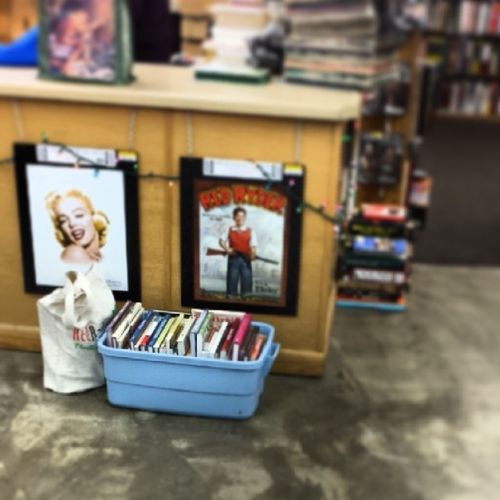 It's not that I was a huge fan of any of those actors, or even those shows (outside of a few seasons of Dallas), but that little rag has so far been spared. I did take a bin full of mostly knitting books to my local Half-Price Books yesterday, where Katie used to work; while I didn't recognize a single soul, I did walk away with some jingle in my pocket. And a universal bike mount for my phone.

There's all that time to kill shop while they're figuring out their offer. As they do. 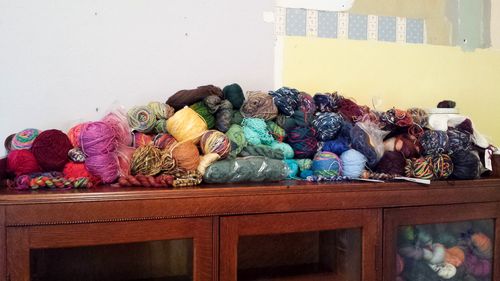 Hello, my name is Vicki and I have a scrap problem. My sock yarn stash wasn't nearly as embarrassing once the scraps and partial skeins were removed! I have since organized it in bins, more or less by color (ROY G. BIV style), and I believe it may be time for another scrappy blanket! I am considering something along the lines of Cornerstone Blanket, A Light In The Window, or Mitered Crosses -- all three patterns currently being offered (through Sunday, 11/24) by Kay at Mason-Dixon Knitting for a $20 donation to Mercy Corps for Philippines relief. As she does.

I am happy to make a donation to help with relief efforts, whether or not knitting patterns are involved, but was nonetheless saddened to discover that I already had all three of those blanket patterns in my Ravelry library, which can only mean that we've had way too many disasters. The boys were so sweet yesterday, helping me get a progress shot of Zim's blanket! I'll continue randomizing the yellow and light teal, bookending with another section of dark teal. It won't be long, now, and I even wove in ends last night!

Oh, I miss those boys already. Mack is such a heartbreaker -- he knows just what the girls (especially his mom, aunt, and grandmother) want to hear. Addy was so excited when he thought there was a possibility that I'd be going along to Rio. It's sure going to be tempting in a couple of months.

Except for the squishy little bundle of joy that will automatically warm up our January. Adorable plush bear made by Alison

Oh, and Addison thinks the baby should be named Addison Junior!

Even Michael Pollan tweeted (@michaelpollan) yesterday in support of Locally Laid! So cool.

That blanket is fantastic! As for the 80s knitting pamphlet - yikes on all those leading men! I did watch Dallas, though, and Knots Landing and also Falcon Crest. Ay yi yi!

Mack, the already skilled woo-er.It's easy to see his charm. Love the blanket as will baby "Jr". My mom made a stuffed animal when she was expecting me. I still have it amongst my treasures.

Those boys are adorable! so glad they were able to visit since you'll be otherwise engaged come January!

I've got some catching up to do with you this weekend but Happy Friday and the blanket and blanket mates are adorable!