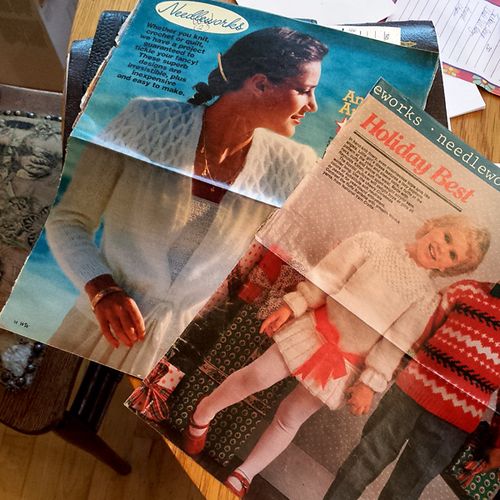 There's been a three-panel french door leaning against a pillar in the living room for months. It was a "summer project" to get it installed. Ahem.

It seemed an overwhelming, almost insurmountable, project to begin at times; bookcases -- five of them -- and all of their contents needed to be shifted around in order to clear the space. I guess it's a testament to just how much I want those doors restored that I finally began the process over the weekend! Annie & her crew were visiting family in Madison and, well, if I want them in by Christmas (which I do), it has to happen now. Also, the place where they were leaning is sort of right where I like to put the tree!

Anyway, a move like this is like busting open the archives. I have found a bunch of stuff that I no longer need, stuff that tugs at my heart, and stuff like the knitting patterns shown above. Ripped from Woman's World magazine, I knit both the sweater and the girl's dress, ca. 1984, sitting in my little apartment on the Wilson River in Tillamook, OR.

They were both very interesting knits -- the dress, in particular, with pleats, ruching, bobbles and lace! That little dress had it all and I learned so much! When I think of my early projects, and my progress as a knitter, it's this little dress that made me a knitter.

Annie's still here 'til Wednesday, I took an extra day off today, and we're having the first "Thanksgiving" of the season tonight, so I'm in the middle of this epic project that's just going to have to sit for a little. And that's fine. The hard part is over!!

It feels great to get stuff like that done but I'd put it off, too. Happy (early) Thanksgiving!

Enjoy time with your family! The project will be waiting when you're ready to return. Good job clearing out what was in the way and taking the first steps in the process.

A project that seems too big to be surmountable -- oh, how I know that feeling. But jump in, and perhaps break it into smaller bits, and it WILL get done. Good for you, and good luck!